John Handy is an alto saxophonist who plays the tenor, saxello, baritone, clarinet, oboe and vocals. He is actually a consummate world musician and teacher who devoted his life to using music to elevate the human spirit. His soulful and fiery saxophone style is instantly recognizable to generations of jazz fans world-wide.

As a performer and composer he continues to sweep audiences into ecstasy with his vast range of creative, emotional, and technical inventiveness. With a superb knowledge and practical experience with music of several cultures, he fuses, with each selection, a musical genre that is coherent, provocative, logical, and enjoyable.

Known most readily as a saxophonist in jazz quartet and quintet settings, John Handy is also featured in solo, duets, and large ensembles ranging in size from big bands to concert bands, symphony orchestras, vocal groups, and choirs.

As a singer, he brings a kind of storytelling narrative to the blues that is entertaining, educational, and moving; while his "up tempo" scat vocals could be compared to the best scat singers anywhere. He sings ballads with inventiveness that is rare among singers.

His album and CD covers read like a who’s who of record labels - Columbia, ABC Impulse, Warner Brothers, Milestone, Roulette, Boulevard, Quartet (Harbor), MPS Records and many others. His most recent recordings are "John Handy Live at Yoshi’s" and "John Handy’s Musical Dreamland" (available only on Boulevard Records, Stuttgart, Germany) "Centerpiece," and "Excursion in Blue." Some of his earlier works have been reissued on CD - "John Handy: Live at the Monterey Jazz Festival," "The Second John Handy Album," "New View," and "Projections." He recorded with Sonny Stitt, and recorded nine albums with Charles Mingus Jazz Workshop.

John Handy has taught at San Francisco State University, Stanford University, UC Berkeley, San Francisco Conservatory of Music, among others. He is a popular performer on university and college campuses where he also gives inspired lecture-demonstrations on the technical, academic, spiritual, and creative aspects of music, winning new converts to jazz.

John Handy has written a number of highly acclaimed, original compositions. "Spanish Lady" and "If Only We Knew" both earned Grammy nominations for performance and composition. The popular jazz/blues/funk vocal crossover hit, "Hard Work," brought him fame in another realm; while "Blues for Louis Jordan" displayed his talents in rhythm and blues. His more extensive works include "Concerto for Jazz Soloist and Orchestra" which was premiered by the San Francisco Symphony; and "Scheme Number One" which was lauded as a fine example of fixed and improvised music by the great composer, Igor Stravinsky.

For the past 23 years, John has led John Handy WITH CLASS, featuring John Handy with three female violinists/vocalists in an unforgettable sound that captures the full range of jazz, blues, r&b, popular, and modal music. This innovative group creates a new musical expression which John refers to (tongue-in-cheek) as "Clazzical Jazz." He continues to lead and perform in groups with a combination of instruments and vocals. Show less 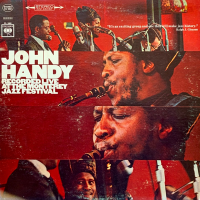 Recorded Live At The...

All About Jazz musician pages are maintained by musicians, publicists and trusted members like you. Interested? Tell us why you would like to improve the John Handy musician page.