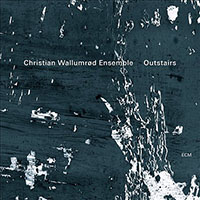 After a four-year break following the biennial run of four recordings beginning with 2003's Sofienberg Variations and ending with 2009's Fabula Suite Lugano (all on ECM), Christian Wallumrød returns with Outstairs. Building on the strength of what came before, the pianist/composer continues to assert a clear identity with this slightly altered ensemble, not only capitalizing on its own intrinsic chemistry but that of two specific members—extant ensemble trumpeter Eivind Lønning and, replacing Baroque harpist Giovanna Pessi, tenor saxophonist Espen Reinertsen—whose collaborative, improv-heavy Streifenjunko explores the expansive timbral possibilities of two instruments rarely thought of as duo material.

Listening to Outstairs after hearing it performed, almost in its entirety, at this year's TD Ottawa Jazz Festival only renders its profound compositional depth, and investigation into broad-spectrum potentials of color, melody, texture and dynamics, even more impressive. The ensemble possesses an intimate ability to unfurl, with rare patience, Wallumrød's compositions, which continue to simultaneously mine an appealing nexus of Norwegian traditionalism and Baroque classicism, in ways both modern and millennial.

The opening "Stille Rock," for example, begins with Wallumrød alone on piano, with decay and quiet equal contributors to a dark-hued, chord-based theme predicated on touch and the subtlest of interpretive temporal shifts. The ensemble joins the pianist, with violinist Gjermund Larsen and cellist Tove Törngren together so subtly as to be near-indiscernible without ever being insignificant, while Lønning's long-held notes are rendered more variable through his use of extended timbral techniques. Despite careful attention to tone and dynamics drummer Per Oddvar Johansen—Wallumrød's longest-standing partner—is almost shocking in his more muscular punctuations and use of a back beat that nevertheless remains adherent to the composition's many moments of rest.

Elsewhere, Wallumrød takes advantage of the clear language Reinertsen and Lønning have shaped as Streifenjunko. With Johansen moving to vibraphones—sometimes using mallets, other times a bow to create ethereal resonances—"Very Slow" is defined by Reinertsen and Lønning, whose otherworldly tonalities might be considered the result of electronic manipulation were it not for the Wallumrød Ensemble preferring completely acoustic environs on tour, even eschewing a PA system unless absolutely impossible to play otherwise.

But it's not all dark shapes, oblique angles and odd textures. Wallumrød moves from piano to harmonium for an a cappella introduction to the aptly titled "Folkskiss," its gentle majesty made all the more so when, halfway through its brief, three-minute duration—and following Johansen's delicate, brush-driven solo—he returns to piano and, introducing the occasional tension-building dissonance, reiterates its folkloric theme. Propelled by Johansen's hand-driven drums, "Bunadsbangla" is similarly stately, Wallumrød's harmonium blending in simpatico with trumpet, saxophone and strings, a middle Eastern tinge imbuing a pedal tone-based climactic build that resolves with Wallumrød once again returning to piano for a coda made even brighter by Lønning's burnished doubling of the theme.

Contrasting introspective explorations with outgoing bursts of angularity, where periods of darkness and light, rounded surfaces and sharp edges, avant-informed palettes and starkly beautiful themes are seamlessly juxtaposed and combined, Outstairs is a both a welcome return for Christian Wallumrød Ensemble and the pianist/composer's most successful fusion of his multifarious musical concerns to-date.