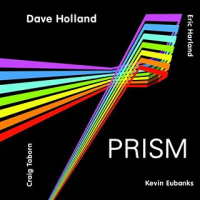 Although über-bassist Dave Holland made his bones with one of Miles Davis' early electric bands, the lion's share of the British native's own music has come from the acoustic side of the scale. As such, longtime Holland fans will receive a major shock with their first listen to Prism. Those fans will need open ears and patience; everyone else just needs a volume control that goes to 11.

The opening Fender Rhodes vamp on Kevin Eubanks' "The Watcher" comes straight out of jam-band fave Chris Potter's Underground—not surprising, given that it's CPU keyboardist Craig Taborn making the noise. Eric Harland starts his quiet cymbal thing on the drums, but then Eubanks' electric guitar comes in loud and proud and the whole band detonates, tearing into the heart of a semi-dissonant, kinda-sorta-funky figure. Taborn adds harmony while Eubanks solos over the bridge, and then the two fly formation before Taborn launches into a solo that's so nasty, it's almost rude. This is killer jazz from start to finish, but the attitude is all rock and roll.

Sticking with surface impressions, Prism does look like Holland's show: He's the producer on the date, his name is in a slightly bigger font on the cover, and Holland does have scintillating spotlight moments, most notably his in-the-clear opening on Taborn's ever-expanding "The True Meaning of Determination." That said, there's no real dominant soloist on Prism, and songwriting credits are spread throughout the quartet. In short, it's a band thing, giving the music a fierce unity.

People are still shocked that Eubanks is so much more than the ex-bandleader of the Tonight Show. Well, if Eubanks' rip-snorting performance on his own disc The Messenger wasn't enough of a clue, then his fuzzed-up blues on Holland's "The Empty Chair" and thoughtful work on his own "The Color of Iris" might clear the mental blocks. Eubanks has got serious game, and the group's delightfully complex format lets him showcase it.

Harland is known more for the subtleties he finds then the windows he breaks, which his why his nuclear blasts on "Watcher" and Eubanks' slashing "Evolution" will leave such a mark. But it's Harland's impeccable composition skills that make a bigger impression: "Choir" is a lively gospel/R&B rave-up that offers tons of big fun, and the contemplative "Breathe" puts a beautiful coda onto the nine-track set. The latter tune shows how deep Taborn's expressive gifts go, a reminder that he does just as well in acoustic mode as he does on electric. His Rhodes on "Chair" and "Evolution" definitely burns it up, but it's Taborn's nuanced piano that adds depth and richness to his own complex "Spirals" and Holland's cruising "A New Day."

Prism may set up as a return to rampant, unapologetic 70's-era fusion, but listening and patience finds so much more. This rich, complex date needs to be heard in the light, so the astonishing colors it creates can brighten the whole room.