By JOHN PIETARO
December 22, 2020
Sign in to view read count

Perhaps the one strength grown of this year from Dante’s fifth circle has been self-contained boldness. Artists of every stripe have poured themselves into practice and expression born of the lockdown and in spite of it.

It would be a fool's errand in a covid-damaged society to attempt a peaceably gathered year's end "Best of" list, in jazz or any other genre or medium. But artists of jazz and all avant gardes have been especially susceptible to the considerable financial ebbing and health concerns of this period. Discussing this concept with my wife (and best critic) Laurie, I was caught by her knowing response: "It's not so much a Best of," she said, "but a TEST of 2020." And with so much challenge about us this year, arts implosions being but a skimming of the national surface, I wholeheartedly agreed to offer my "Test of 2020." It's one founded on survival and resilience. It is also founded on the power of creativity, whether there is a market or not, as a model for the thriving of us all.

This year, in addition to watching beloved venues shutter (including Café Bohemia where my poetry/jazz series West Village Word was housed oh so briefly), seeing great byways of life and commerce silenced and feeling the struggle and pain of so many, I had to contend with the death of my mother and the rapidly progressing dementia which has leveled my father who is residing in a nursing home. The tremors cross-country were played out in the streets after glaring, violent police murders and the rise of the BLM movement, along with the slow, laborious onset of the election and ensuing insanity spewing from the White House and all walks of the right-wing. And of course, the fight-back against such insanity has too been happily on the rise. Perhaps the one strength grown of this year from Dante's fifth circle has been self-contained boldness.

Artists of every stripe have poured themselves into practice and expression born of the lockdown and in spite of it. Musicians, dancers, spoken word artists and actors have premiered remote performances across the globe while increasing amounts of visual artists and non-performing writers have made grand use of the internet to present works recent and vintage. And a most welcome shift has been the numbers of remote performances encompassing all of the above. Critics, relying on this advanced viewry, have sought to find fresh means to convey our perceptions, including criticism of the connection's sound and visual clarity, which reminds us of the shifts in quality of recordings in each epoch, from acoustic to electric recording processes, and 78 RPM to LP, Hi-Fi to stereo, CD to download and back to disc and "vinyl."

Here's just one more demarcation and the technology has quickly kept up with it. I'm happy to report that during the lockdown I completed a full poetry collection, The Mercer Stands Burning, published in November by Atmosphere Press, wrote numerous pieces for journals and magazines, completed much of a new short story collection and laid the ground work for And I Became of the Dark, a new album by my poetry/free jazz ensemble the Red Microphone. It was finally recorded on the cusp of December by an expanded line-up that I'm very excited about. Hoping this will be available via a noted underground label soon. It has been a tumultuous and memorable time. So, in memory of those lost this year as well as the surging need for survival on every level, here is THE TEST OF 2020... 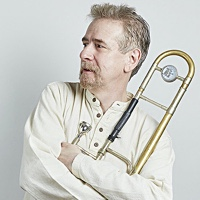