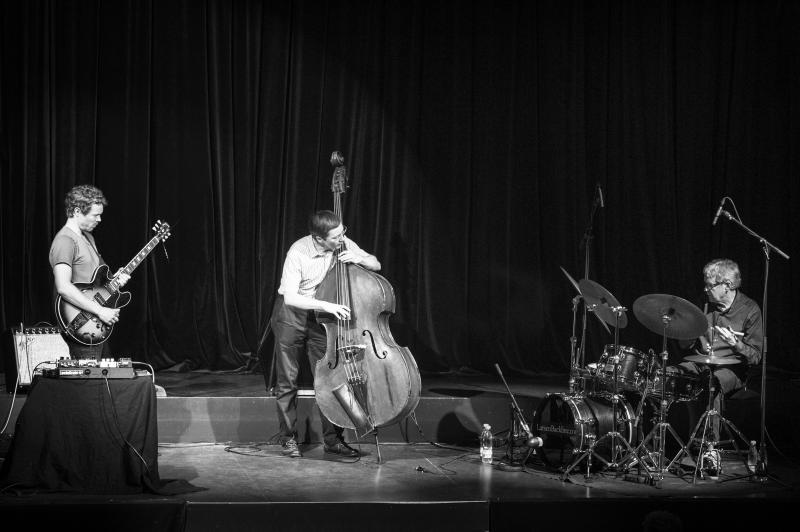 The Copenhagen Jazz Festival, with its more than 1,000 concerts in 10 days spread over more than 100 venues and stages in all parts of the Danish capital is like a musical monsoon cloudburst. The concerts range from big international stars to up-and-coming Danish artists and the avant-garde, reaching beyond common perceptions of jazz music. The festival also offers a wide range of admission-free concerts in cafés and squares, and brings together locals and tourists, young and old, as well as local and touring musicians. As a non-profit organization, it is a communal affair that aims to serve the Danish jazz scene.

One of the festival's highlights was the first appearance of a new trio consisting of Danish guitarist Jakob Bro, American double bassist Thomas Morgan and veteran Norwegian drummer Jon Christensen . The trio will be touring Europe in the fall of this year.

One of the more illustrious concert venues in Copenhagen is Christiansborg's Hofteatret auditorium, with its deep, sloping stage, plush velvet upholstery, elegant royal boxes and beautifully decorated oriental ceiling. This former 18th century Court Theatre is now the Danish theatre museum, and is part of Christiansborg Castle, which accommodates the Danish Parliament, Folketinget.

Bro is a member of polish trumpeter Tomasz Stanko's Dark Eyes quintet, and has played in drummer Paul Motian's groups as well as leading his own bands. He released the remarkable Time (Loveland Records, 2012), with Morgan, alto saxophonist Lee Konitz and guitarist Bill Frisell, as well as the predecessor, Balladeering (Loveland Records, 2009), with again with Konitz and Frisell, but with Motian and bassist Ben Street. 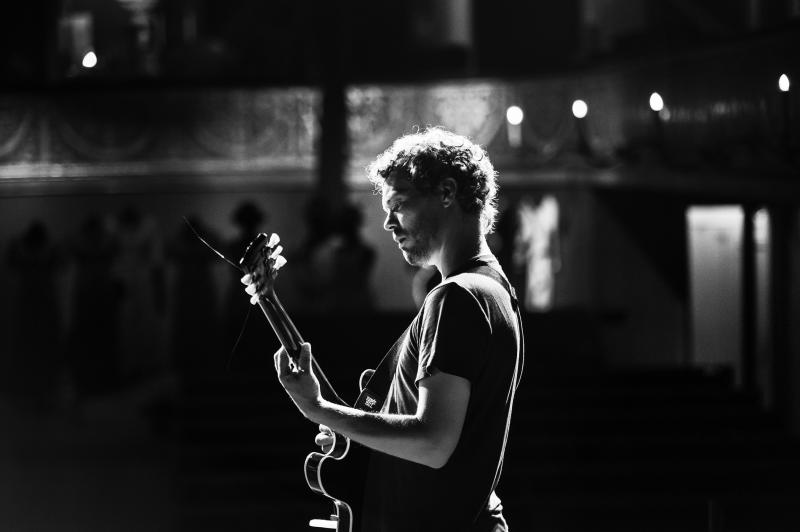 Morgan is one of the most in-demand bassists of the moment, having played on more than 60 albums. Like Bro, the bassist has worked with Motian, as well as in various combinations with saxophonists David Binney and Steve Coleman, pianists Sylvie Courvoisier and Masabumi Kikuchi, and trombonist Samuel Blaser.

Christensen was the nearest thing to a house drummer in the early days of the German ECM label. He was the drummer on saxophonist Jan Garbarek's first ECM album, Afric Pepperbird (1970)—collected in the just-released, three-CD ECM box, Dansere (2012)—and has also played with pianists Keith Jarrett (including the recent Sleeper (ECM, 2012), a previously unissued 1979 live recording of the "Belonging" group), and Bobo Stenson; guitarist Terje Rypdal; bassist Arild Andersen; pianist/guitarist Ralph Towner; saxophonist Charles Lloyd; Stańko; and guitarist Jacob Young. He is currently the drummer with pianist/harpist Iro Haarla's Finish/Norwegian quintet, heard most recently on Vespers (ECM, 2011).

The trio's performance revealed a special sensation of free(d) playing. Three musical worlds getting together; three musicians bringing their very own way of sound making into a realm of listening that builds upon their mutual musical confidence. Circling around each other, they miraculously got closer and closer with a very own fluidity emerging. It was in the way that it happened and carried on that was so special about this new trio.

Christensen opened by hand-playing his three cymbals, producing wonderfully rustling and intensive resonances—extraordinary. After the concert, Christensen said that it was his way to get in touch with the room and the audience. The trio's positioning on stage (seen from the musicians' perspective) clearly had some significance: Christensen at the utmost edge on the left facing his young fellow musicians; Morgan in the center, mainly facing Christensen; and Bro on the right, facing the other two and his electronic devices. 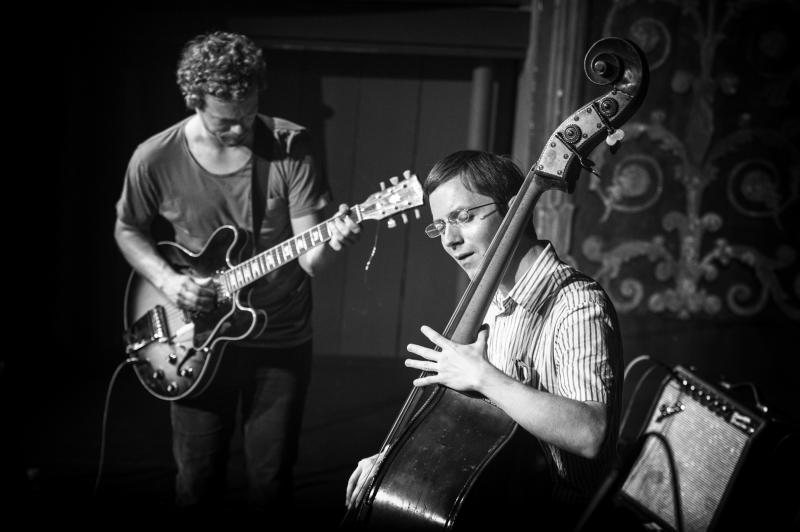 Bro supplied the basic lines—mainly original compositions but also a Yusef Lateef piece—which were anchored and rounded off by Morgan's always carefully chosen and articulated bass plucks, and illuminated and elevated by Christensen percussive accents, dots, swishes and crashes. Throughout the set, Christensen played 100% intuitively. Morgan learned the songs played to him briefly, by ear—Bro "forgot" to bring the charts—and Christensen neither saw nor heard a single note beforehand.

Hiding behind his cymbals, Christensen resembled a lurking tiger ready to pounce at the right moment and crash his cymbals. He often initiated moves, gave impulses and steered the music in different directions. "One tone by Thomas or Jakob makes a whole composition. Every tone offers rich opportunities to make music," Christensen later commented—a comment that hints at the drummer's conception of playing. It was possible to forget about time and tempo during the performance, and just focus on the music unfolding through all the instruments and musicians involved. "It's not just a bang, as to make the music loud or so. It has to be in a place musically spoken. And I can do it because I know it falls on fertile ground with Jakob and Thomas. Playing regularly is not what I want to do. That's because the music (for me) is not happening there," Christensen also said, explained his overall approach.

Tranquility, trust and confidence, accompanied by a high degree of interaction, marked the trio's performance, with intensive eye-contact, waiting and receptiveness all a part of it. In the movements of his hands and fingers Morgan's thinking became visible, the tone-to-next-sound suspended in a split second. "Very often I don't know what is coming next from Thomas," said Bro, describing Morgan's unpredictability and reliability. Morgan was constantly looking forward and overtly "reading" Christensen's actions (to come). Often, Morgan also took the initiative or laid down a groove in time.

Bro had to manage his role as instigator and responding receiver. One of the most fascinating things to watch was when Bro used electronics, including feedback, looping and distortion. Morgan generally continued his measured playing, which at first sounded a bit odd but ultimately fit perfectly in the long run. It also worked this way due to that special subdued quality of Bro's electronics, which created contrast and, at the same time, permeated and "sang through," even when it sometimes became wilder. 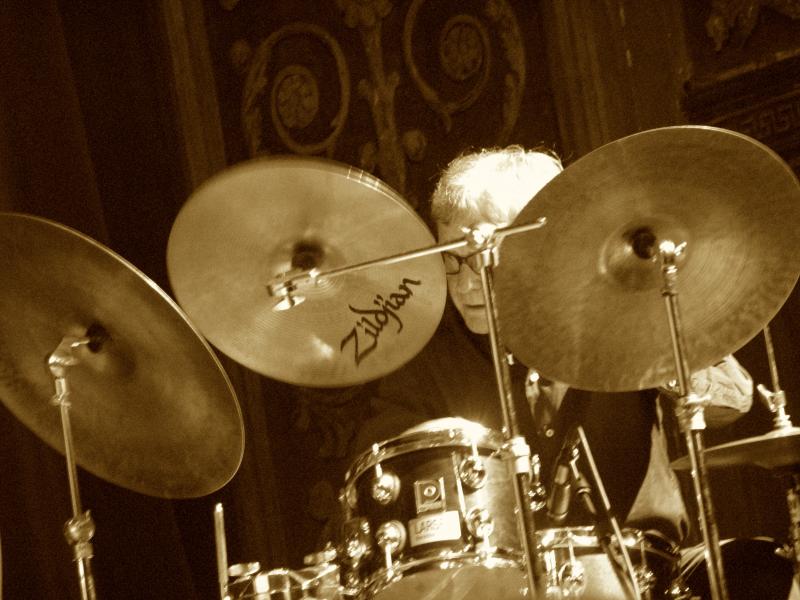 It all started with Christensen's rustling cymbals. It ended with the sounds of his thrown up drum-sticks swirling down on the theatre floor at the end of the encore.

All Other Photos: Karolina Zapolska