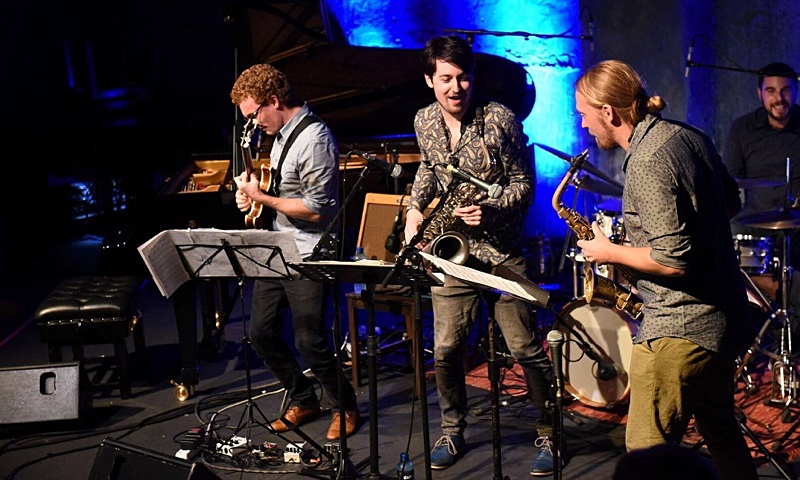 By IAN PATTERSON
October 31, 2016
Sign in to view read count

Galway has shown in its recent history that culture works; culture pays, culture creates energy…from the culinary arts practised at their zenith to events like the Galway Jazz Festival. —John McKenna, Food Critic

The best jazz festivals are not necessarily the biggest. They're not always the ones with the marquee names. The best festivals, without a doubt, are the ones you remember, years later, for having had a hell of a good time. Such festivals, first and foremost, are usually rooted in and celebrate community. They often promote feasting, revelry and joy. The Galway Jazz Festival ticked all those boxes over a memorable weekend, one that that may well mark a turning point in the festival's fortunes.

The weather was kind too, with the torrid Atlantic squall and autumnal windstorms that toy with the west coast of Ireland staying away for the weekend. Of course, good weather helps, but Galway is a fun city whatever the skies dish up, habitually exuding a lively, sociable spirit.

The backdrop to the 11th Galway Jazz Festival was a vibrant one. The city's streets were bustling with young Europeans over on English study programmes; older, Irish- American tourists tracing their roots queued up to buy Galway's famed Claddagh ring, the symbol of friendship, love and loyalty; the city's restaurants, bistros and cafes were bursting at the seams; pub crowds spilled over onto the streets, the terrace tables awash with Guinness, oysters and banter.

Everywhere, the air was filed with the music of buskers, as traditional Irish folk, flamenco, a plethora of hurdy gurdy practitioners and guitar-strumming singers all vied for loose change. The compact nature of Galway meant that it was possible to stroll with ease from theatre to club, from bar to restaurant or hotel, from one gig to the next, through the alleys and lanes of the city' winding pedestrian heart.

All told, just a normal early October weekend in Galway.

There was, however, a different feel to the Galway Jazz Festival this year. Even a few months prior, you could see that change was afoot from the festival's swanky new website. Much of the impetus for the improvement in GJF's quality is down to the new Artistic Director, Matthew Berrill, who with significant support of Ciaran Ryan, Maeve Byran and Aengus Hackett and a first-rate team, has upped the ante program-wise, not just in terms of the names performing but in the adventurous nature of the festival's menu.

A defining feature of GJF '16, and a large part of its charm, was down to the close ties of the festival with the city's restaurants and artisan food and drink merchants. Galway's top-class restaurants proved to be most generous hosts to the musicians, and in the process, served as wonderful cultural ambassadors for a city designated as European Capital of Culture 2020.

Gourmet food and fine drink—cheeses, wines, ales and pastries to die for—were never far from hand during GJF '16, a tradition arguably dating back centuries to times when Spanish and French galleons unloaded wine, brandy and cured ham in Galway's port, loading up with wool, metals and perhaps the odd jug of poteen—oats, barley or potato based moonshine—for the return journey.

Opening with John McKenna at The Kitchen

Given the close relationship at GJF '16 between food & drink and music, it was appropriate that the festival's official opening should take place in The Kitchen—one of the city's best, yet most unpretentious eateries—with a few words of welcome from Ireland's greatest food authority, John McKenna.

McKenna, an ardent jazz fan, knows about both music and food. Who else, in a book about restaurants, would dream of comparing Irish Prime Minster Enda Kenny to Ornette Coleman?

In the late 1970's McKenna, a student at the time, was a music journalist for Dublin music magazine Hot Press, where he acknowledged writing "incomprehensible rubbish" about jazz records. McKenna has enjoyed wider fame as an award-winning food writer, authoring numerous guide books—with wife Sally McKenna—on the best restaurants in Ireland.

"The wonderful thing about jazz is that when it hits you you're not the same person," McKenna began. "After you've heard "Round About Midnight" for the first time, or "Milestones" or "Giant Steps," or "Red Beans and Rice..."something within you is forever changed."

If for some of those present the link between food and jazz sounded a little tenuous, McKenna soon put any such doubt to bed. "When you think about what the great cooks in Galway do, and what the musicians are going to do over the weekend, they both do the same thing, with different materials. They both fundamentally improvise in real time. No great cook cooks the same dish twice—ever. No jazzer ever plays the same set of chords or the same phrase the same way twice."

In wrapping up, McKenna paid tribute to the hard work of all those involved in staging the GJF '16, and to the importance of culture. "Galway has shown in its recent history that culture works; culture pays, culture creates energy...from the culinary arts practised at their zenith to events like the Galway Jazz Festival."

Certainly there was a massively positive energy in The Kitchen for the GJF '16 launch as the youngsters of the Headford Music Works jazz ensemble worked their way admirably through a few jazz standards while waiters circulated with platters of delicious sweet and savoury pastries, and the good folk from the Galway Brewery served glasses of porter, ale and beer.

Cormac Larkin, internationally respected jazz critic for The Irish Times and curator of the Sofa Sessions at Billy Byrnes, Kilkenny, presented three lunchtime concerts over the weekend in the oyster bar of The Meyrick Hotel. This handsome hotel sits facing Eyre Square, also known as John F. Kennedy Memorial Park, in honor of the US President, who made a speech here in 1963, just six months before his assassination. The Meyrick's central location made it a good choice for the free gigs, enabling city centre workers to enjoy top-class jazz during their lunchbreak.

Guitarist/sound sculptor Shane Latimer, who impressed during the Improvised Music Company's two-day avant-garde guitar festival String Theory back in May, got the Sofa Sessions rolling on Thursday, 6 October, a day before the official launch of the festival. All About Jazz picked up the thread the following two days.

Phil Ware, Dave Redmond and Kevin Brady together constitute one of Ireland's finest jazz trios, with almost a decade under its belt since Ware's debut recording In Our Own Time (Pewter Music, 2007). All have played with many of the UK's and the US' most celebrated jazz musicians, including Norma Winstone, Peter Bernstein, Georgie Fame, Ian Shaw and Bobby Wellins, to name just a few.

At swinging tempos, notably on the Gene de Paul/Don Raye standard "You Don't Know What Love Is," the trio's intuitive interplay was chief protagonist. Ware, a pianist of the less-is more school who wastes very few notes, indulged himself just a little on the helter-skelter charge of {Charlie Parker}}'s bebop/blues classic "Relaxin' at Camarillo," a fun, adrenaline- charged conclusion to a fine set.

St. Nicholas Church dates to the early 14th century and has been in continuous use since then. Christopher Columbus stopped here to pray in 1477. Another visitor, one whose mark can still be seen, was English General Oliver Cromwell, whose troops stabled their horses inside the church following the seven-month siege of Galway that ended in 1652. Cromwell's troops are said to have desecrated monuments inside the church -most of the carved figures on the church's pillars and walls are without faces and hands.

Four hands were needed for organist Mark Duley's performance of Bach's Goldberg Variations. The organ dates from 1912, though original pipes from the 1845 model remain. It's a model little changed from organ designs of the 13th and 14th centuries, with multiple stops (or draw-knobs) operated manually. To that end, Duley was aided by organist Ronan DeBurca, who stood for the full eighty-minute performance, periodically pulling the stops to allow air into the pipe chambers.

Bach's Goldberg Variations is most usually performed on piano, and, given that Bach is often referred to as the first jazz musician, it's not surprising that his most iconic work for harpsichord should invite versions from jazz musicians (or jazz-styled interpretations) such as those by Keith Jarrett, Jacques Loussier, Uri Caine and Dan Tepfer. Organ recitals are less common by comparison, though one contemporary recording by Robert Costin (Stone Records, 2013) is worth checking out.

The hundred-year-old organ of St. Nicholas' Church doesn't have too many pipes, nor are they particularly large, hence the sound during Duley's performance didn't transmit too well towards the back of the church. For the lucky ones sat in the choir's pews directly facing the organ, however, the recital felt like a delightfully intimate performance. From the wistful opening aria, Duley's variations passed from the contemplative to gently dancing motifs and from tender melodicism and more sombre modes to fizzing toccata.

DeBurca pulled the drawknobs in the short gaps before each variation—a labour-intensive exercise that required alertness and great timing. Hypnotic fugues, trills and slow- walking bass lines/chordal progressions combined ornamentation with rhythmic compass, though the most arresting segments were, arguably, also the most virtuosic. Nearly an hour and twenty minutes after starting, Duley steered the music back to the opening aria, signalling the end of a special performance—just a heartbeat away from jazz—and earning the organist a prolonged ovation.

London-based Irish vocalist/composer Lauren Kinsella was coming to the GJF '16 fresh off the back of her Jazz FM UK Vocalist of the Year Award. It's been a busy year for Kinsella, with the release of the debut album from Snowpoet (Two Rivers Records, 2016)—her poetic folk-cum-psychedelic collaboration with multi-instrumentalist Chris Hyson—and Abrha, a poetry-inspired recording by French saxophonist Julien Pontvianne's pan-European ensemble.

In the funky, retro surroundings of nightclub Electric, Kinsella lead her own group through material old and new. A couple of refreshingly alternative arrangements of "My Guess" and the infectious "Malin's Chai" from My Guess (Diatribe Records, 2013) opened the set. With the rhythm section of bassist Conor Chaplin, drummer Simon Roth and pianist Dan Nicholson providing tight but elastic support, the main sparks flew between Kinsella and saxophonist Tomas Challenger, whose every probing improvisation pulled the quintet into adventurous terrain that felt as if it could go off in any direction imaginable.