Born Clive Powell on June 26, 1943 in the English industrial town of Leigh, Lancashire, Georgie Fame’s interest in music initially grew out of his family entertaining in the home and musical evenings in the church hall across the street, where his father also played in an amateur dance band. Although young Clive began piano lessons at age seven, he didn’t stick too long with the formal training. But when rock and roll started to be broadcast on the radio during the mid-fifties, a then-teenage Clive began to take the piano more seriously, playing piano in various pubs and with a local group, “The Dominoes.”

In July 1959, he joined up with Rory Blackwell, the resident rock and roll bandleader and his band Rory and the Blackjacks In October of that year, the Marty Wilde Show was performing at the Lewisham Gaumont and Rory Blackwell arranged for Clive to audition “live” for impresario Larry Parnes, who after hiring him, he renamed “Georgie Fame,” and the name has stuck to this day. By the age of 16, Billy Fury selected four musicians, including Fame, for his personal backing group and the “Blue Flames” were born. At the end of 1961, after a disagreement, the band and Fury parted company.

Another gloomy out-of-work period finally ended in March 1962, when Georgie Fame and the Blue Flames took up what was to be a three-year residency as the house band at the Flamingo Club in London’s Soho district. In 1963 their first album, “Rhythm and Blues at the Flamingo” was recorded live at the club. Georgie also pursued his interest in jazz, recording the milestone album, “Sound Venture,” with the Harry South Big Band. This led directly to successful tours of the UK and Europe in 1967 and 1968, which found Georgie singing with the Count Basie Orchestra.

From 1970 to 1973, Georgie Fame worked almost exclusively in a partnership with fellow musician Alan Price (former keyboard player for The Animals). Their partnership came to a close several years later, but the television exposure had made Georgie Fame a household name in Britain.

In 1974, Georgie reformed the Blue Flames and they continue working with him (in one form or another) to this day. At that time, Georgie also began to regularly step away from the keyboards to sing with Europe’s finest orchestras and big bands, a musical tradition he still currently pursues

In 1981, Georgie co-produced and performed with jazz vocalist, Annie Ross, on the album “In Hoagland”, which featured the music of the legendary Hoagy Carmichael. A similar tribute to Benny Goodman, “In Goodmanland,” recorded in Sweden with vocalist Sylvia Vrethammar, followed in 1983. In 1988, during one of his regular visits to Australia, Georgie produced the album, “No Worries,” with the Aussie Blue Flames. And in 1989, the album, “A Portrait of Chet,” dedicated to jazz trumpeter Chet Baker, was recorded in Holland.

It was in 1989 that Georgie Fame joined forces with Van Morrison, after having been invited to play Hammond organ on Van’s “Avalon Sunset” album the previous year. He continued to record and tour with Morrison throughout the nineties. During that time, he and Van co-produced and performed on the Verve albums, “How Long Has This Been Going On,” (’95) and “Tell Me Something: The Songs of Mose Allison.” (‘96)

Also in 1997, bassist Bill Wyman began forming his new band The Rhythm Kings and Georgie Fame became a founding member. Since that time, there have been five CDs and several tours, and The Rhythm Kings "reform" periodically to tour and record to the present day. During 1999, Fame presented several radio programs on BBC Radio, including his own six-week series featuring The Blue Flames plus special guests, including Madeline Bell, Bill Wyman, Zoot Money, Peter King, Steve Gray and Claire Martin.

In the year 2000, Georgie’s critically-acclaimed CD, “Poet in New York,” was voted Best Jazz Vocal Album by the Academie du Jazz in France. In 2001, the latest Three Line Whip CD, “Relationships,” was released, which included some of Georgie Fame’s finest songwriting to date. In the same year, a compilation CD, “Funny How Time Slips Away: The Pye Anthology,” was released.

Throughout his 40-year career, Georgie Fame has recorded over 20 albums and 14 hit singles. He is equally at home in the company of jazz groups and big bands, orchestras, rock groups and his own band, The Blue Flames.

Ever on the road, Georgie Fame continues to perform his unique blend of jazz/rhythm and blues for live audiences at clubs and music festivals throughout Europe. Show less 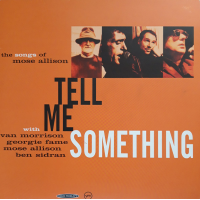 All About Jazz musician pages are maintained by musicians, publicists and trusted members like you. Interested? Tell us why you would like to improve the Georgie Fame musician page.