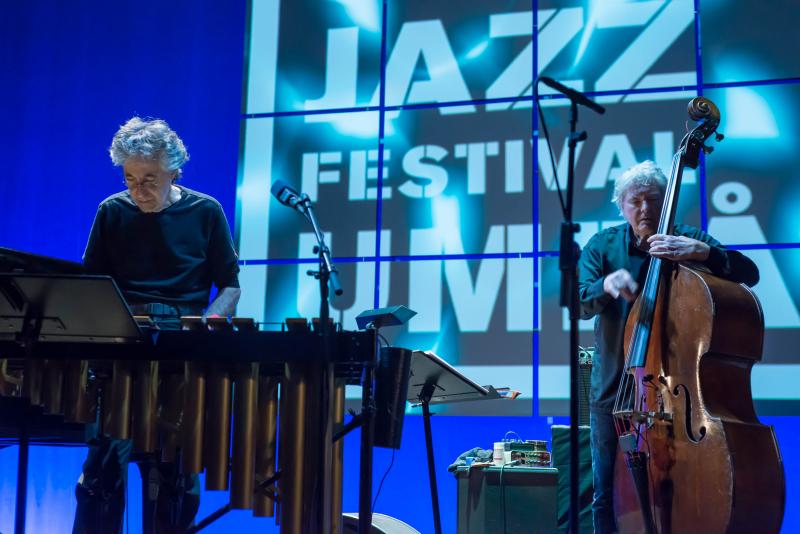 By JOHN KELMAN
November 7, 2012
Sign in to view read count
2012 Umeå Jazz Festival
Umeå, Sweden
October 24-28, 2012
Nestled about 20 kilometers from the coast of the Baltic Sea in northern Sweden, connected by the Ume River, sits Umeå (pronounced: ooo-me-oh), a town of about 120,000 (including the surrounding region). Small it may be, but since 1968 it has hosted an annual jazz festival that takes place the last week of October and acts as kind of final big splash before the winter and long nights settle in. "How short the days are kind of depends on the weather," says Lennart Strömback, who has been the festival's Artistic Director for 22 years. "If it's snowing it can be quite dark, but if it's sunny, the days are usually about four hours long."

Even at the end of October, nearly two months before the winter equinox, it's already getting dark quite early, and it's cold-early mornings in the week spent in Umeå to attend the jazz festival saw the mercury dip, at times, as low as -11 Celsius. Even for a Canadian, that's cold for this time of year. "I don't know what their aims and wishes were in 1968 [when the festival began]," says Strömback, "except for peace and love, but at this point I think it's a kind of celebration, with a sparkling week before darkness comes to this part of the world."

"I'm always looking for those young artists that will surprise people. It's important to be able to communicate with a younger audience, so [performers like Canadian pianist/singer] Elizabeth [Shepherd] act as a kind of catalyst. I'm interested in food, where you have all these different flavors coming together to create delicious dishes. Elizabeth, she's one of the sweets," says Strömback, laughing.

When Strömback took over the festival in 1990, there were some significant challenges. "Until then, I think most artists brought [to Umeå]were big American names-and some really amazing names-but my contribution has been to bring some of the leading artists in the field of improvised music that are A bit more electric in their approach," says Strömback. "It was more of a mainstream festival. Still, now and then there were some pretty creative artists coming into town. Sun Ra was here in 1969 or '70, and he was pretty far out, so there has been some activity on the edge. But you have to consider that this town is not a big town. When I moved here in 1988 there were only 80,000 people, and the city has been growing by, more or less, about 1,000 people a year. 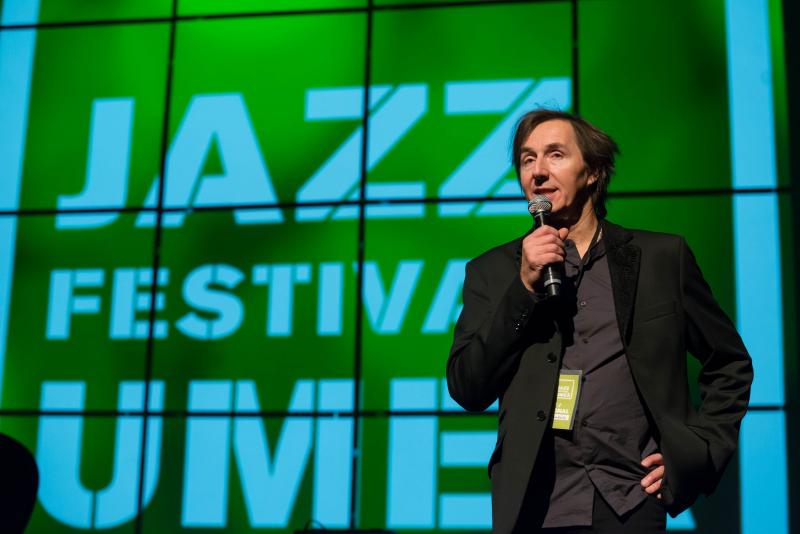 "Today, you can see a lot of lesser-known musicians," Strömback continues. "I think the profile of European jazz musicians is rising at the festival, as well as musicians from all over the world. I see Umeå as an arena, as a meeting point for different kinds of directions. It's not necessary to be labeled as a contemporary improv festival. You can find so many aspects of jazz here, and that's my vision. When I first started, I had this Jazz Lab-the small room with some far out-musicians-and it was almost empty every concert the first year; but over the years, this series has grown and now there's almost always a line to get into it. People have adapted and they're also really curious about these kinds of new concepts, the new directions of jazz and improvised music that they very seldom get the opportunity to hear."

Umeå may be a small town in relative terms, but a major university-and a military presence, beginning in the 1920s and '30s, that brought in some soldiers who were also jazz musicians-has resulted in a scene which has continued to gradually expand in the ensuing decades. "There were jazz musicians playing in their spare time, even in the '30s and '40s; there were some great amateur musicians," Strömback says. "In the '50s, an especially hot guy name Lars Lystedt was working and playing in bars, and he went to New York, because of working on the boats, buying records, hanging out in the clubs and coming back with dozens of great records. So, even in the late '50s, when there were really great musicians who were, in their own way, on a more professional level, there was this guy-who also became the first promoter of live music here in Umeå.

"The first concert with an international musician was [trumpeter/singer] Louis Armstrong, and it was so popular that thousands of people gathered," Strömback continues. "So, Lars then started the jazz festival in 1968; it was really important to have this dedicated person to start off the movement at the time."

Since then, Umeå has been the home of a number of important jazz musicians. Some of the more important and internationally known names include saxophonist/pianist Mats Gustafsson, drummer Morten Ågre and saxophonist Jonas Knutsson.

The festival is not unlike The Netherlands' North Sea Jazz Festival, albeit on a smaller scale, with most shows taking place at Folkset Hus, which houses a number of performance spaces ranging from a capacity of 60 to 1,200. With approximately 4,500 attendees in 2011, the festival also participates in a local, volunteer-driven jazz club that brings one jazz show to Umeå each week.

While not as extensive as Norway's, Sweden's arts funding is still better than most European countries-though it could use, according to Strömback, more attention to exporting some of the country's fine musicians to the rest of the world. "For the last six years we've had a right-wing administration," says Strömback, "and it has really had an effect on funding for the arts. Still, there has been plenty of support, with the majority of Umeå's funding coming from the municipality."

One weakness of many international festivals is a focus on artists from abroad, to the exclusion of local artists or artists from their own countries. Umeå addresses that by producing an opening night show where students from Midgårds-ranging in age from 16 to 18-deliver an evening's performance of jazz music. And on the Sunday night at the tail end of the festival, a collection of local musicians (some quite famous in Sweden) put on another show that's more like a festival after-party, but one with some seriously fine music and an emphasis on fun and booty-shaking grooves.

With a fine lineup over the course of the week, one of the most eagerly anticipated performances was, however, from Finnish pianist/harpist Iro Haarla and her quintet, collaborating with the local symphony orchestra on a newly commissioned composition. It was a great way to kick off the festival's main program, and a perfect place to begin coverage of the 2012 Umeå Jazz Festival.

Following an entertaining Midgårds Jazz Festival evening that featured local students with mixed results, Umeå 2012 got off to a particularly strong start with a commissioned piece from Finnish pianist/harpist Iro Haarla. Written for symphony orchestra and the quintet which has released two marvelous recordings on ECM-2005's Northbound and 2011's Vesper-what distinguished it from other symphonic collaborations was its remarkable integration. This was not a case of alternating passages for orchestra and quintet, though there were plenty of feature spots for Haarla's group, including original members, Finnish bassist Ufe Krokfors band Norwegian saxophonist Trygve Seim (himself a successful leader on ECM since 2001), alongside newcomers, Norwegian trumpeter Hayden Powell and Finnish drummer Mikko Kallio, replacing founding members Mathias Eick and Jon Christensen, respectively. 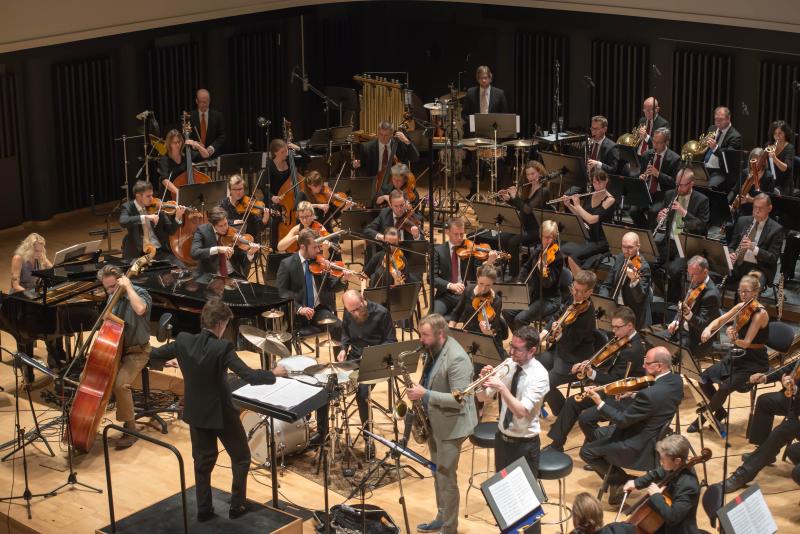 Instead, this 70-minute suite, intended to reflect on that quiet time of day between moonset and sunrise, traversed a great range of imagery and emotion. Haarla's contributions to ex-husband Edward Vesala's Sound and Fury have been documented plenty, but it bears reiterating how influential she was on the late Finnish drummer when she joined the group for Lumi (ECM, 1986). That her compositional contributions to Vesala's music went uncredited at the time was, in retrospect, absolutely unforgivable, but the great news is that in the years since Vesala's death in 1999, her work has become more visible, both through her ECM recordings and in contexts like the 2010 Tampere Jazz Happening, where a reunited Sound and Fury group performed a set subtitled "The Music of Iro Haarla."

Haarla's ability to create floating stases with turbulent underpinnings reflected a similar approach to her days with Vesala, but now clearly attributable to the pianist/harpist, who played with great care and concentration, creating tension-filled ambiguities for her group and in this case, the NorrlandsOperans Symfoniorkester, conducted by Jukka Iisakkila. But even when a sense of controlled chaos reigned-made all the more dramatic for having the palette of a large orchestra at her disposal-Haarla's irrepressible lyricism remained fundamental throughout.

Seim was, as ever, a marvel of patient melodic development, his unique ability to bend notes (stemming from studies of ethnic instruments in the Middle East) turning one particular a cappella moment, early in the performance, into a highlight all the more powerful for its understatement and restraint. Powell, a mid-twenties trumpeter who has been garnering increasing attention, changed the complexion of Haarla's quintet considerably with a more burnished, brassy tone that contrasted with Eick's softer, more breathy embouchure. Together with Seim, he created a more powerful and, at times, piercing presence, as capable of strong thematic ideation as he was more outré concerns.

Krokfors first gained attention in the late '80s/early '90s Finnish group Krakatau, which also included intrepid guitarist Raoul Bjorkenheim and released two fine albums for ECM, Volition (1992) and Matinale (1994). Since that time, Krokfors has developed considerably as a bassist. His Umeå performance-as an accompanist, but particularly as a soloist, where he demonstrated a deep, robust tone, rare dexterity and, like his band mates, a concise sense of focus- was even more impressive than his 2010 Tampere Jazz Happening set, playing (along with Haarla) in Finnish saxophonist Juhani Aaltonen's fine quartet.

Like Powell, Kallio may not be well-known outside his country, though his performance with saxophonist Markus Hollko at Tampere Jazz Happening 2010 was certainly notable, and hopefully the exposure of working with Haarla will achieve greater international attention for both players. Kallio's ability to combine Christensen-like textural free play with a more definitive temporal sense when required, made him an ideal fit for the group, and one which will undoubtedly continue to change its complexion over time. 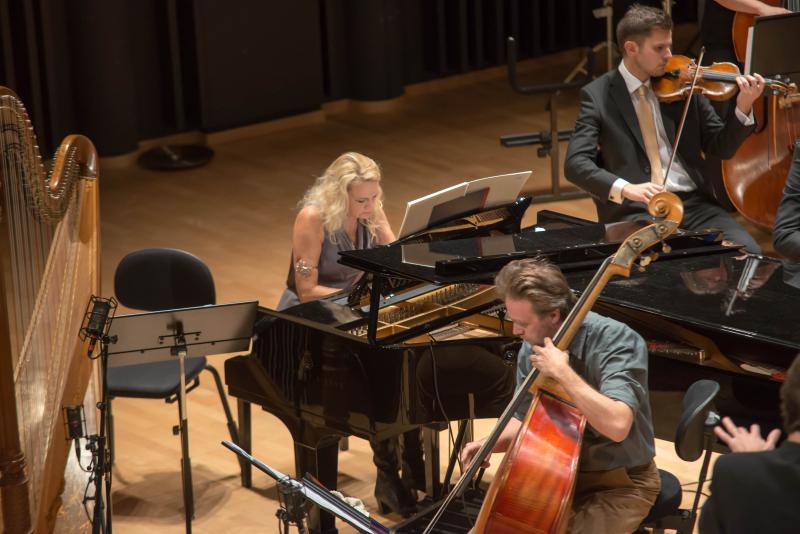 Haarla's writing moved from maelstrom-like turbulence to deeper melancholy and, ultimately, that gentle silence-approaching beauty which evokes so much promise at the start of each and every day. Whether it was more dramatic turns with the full orchestra or breakdowns into smaller subsets-such as a late-set trio with Krokfors, Seim and, on harp, Haarla-it was an evocative and provocative performance. The good news is that it was recorded, along with sessions over the next two days (in the same room, but without an audience). As it turned out, according to Seim later in the week, the majority of the best recordings came from the live show-no surprise, given the rapt audience's enthusiastic energy and response-so hopefully there will be a release of this project sometime soon.