Raymond Strid started to play the drums relatively late. As he had become addicted to listening to music, sometimes spending eight ours a day in front of the stereo, he was encouraged to start playing himself (and to this day, he is still a dedicated listener and audiophile). With no musical background he thought the drums would be the easiest instrument to learn. He was particularly inspired by some of the European master drummers like Han Bennink, Paul Lytton and Tony Oxley.

Strid's first concert was 30 September 1977 and he subsequently performed in a variety of local groups in Stockholm. In 1988 he formed the Swedish trio GUSH together with Mats Gustafsson and Sten Sandell. From that point work has also included a wide number of groupings and projects such as Guy/Gustafsson/Strid, Crispell/Jormin/ Strid and the free jazz trio LSB (Fredrik Ljungkvist and Johan Berthling). The Electrics (Axel Dörner, Sture Ericson and Ingebrigt Flaten) was formed in 2000 and that same year he became a member of the Barry Guy New Orchestra. Strid has been touring and participating at major improvisation festivals in Europe and North America. He also considers that, since around 2005, his playing moves stylistically between free improvisation and free jazz, sometimes mixing the two. Raymond Strid also teaches improvisation, methods and aesthetics. 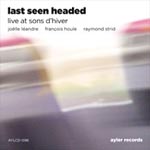 All About Jazz musician pages are maintained by musicians, publicists and trusted members like you. Interested? Tell us why you would like to improve the Raymond Strid musician page.