Wayne Shorter: Portrait Of A Visionary 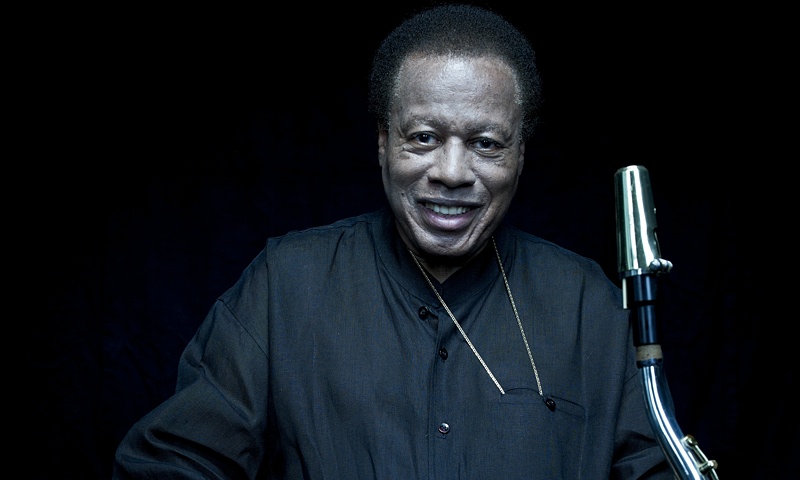 Play a Story. What do you play after you play 'Once upon a time?' What comes next? —Wayne Shorter

To speak with Wayne Shorter can feel like an exercise in the mystical. At times, it's stream of consciousness, ideas flowing that can reach the profound; but the direction can switch suddenly. There are frequent references to films (Shorter is a lifelong movie buff), as well as books whose subject matter run from science to philosophy. The discourse is never delivered in holier-than-thou fashion, nor is it deliberate obfuscation. Its always congenial and conversational. And witty.

Shorter looks at life with a sparkle in his eye. He's pretty much completed the special year of his 80th birthday, with celebrations in concerts around the globe, though there may be more before he turns 81 in August. Over all those years, he still has a child-like curiosity. Things that come out of his mouth are without pretense and uttered freely. Shorter, in addition to be a creative artist of the highest order, is just a nice guy.

"He's one of the most creative artists of all time," says trumpeter Wallace Roney.

"The nicest genius you'll ever meet, but he's nevertheless a genius," says John Patitucci, the bassist in the Wayne Shorter Quartet for more than a decade in an All About Jazz interview a few years back. "He's a musician of the highest level. I've learned a lot from being around him. I feel like I've been very blessed to be around him... Wayne is a beautiful person. He's very generous, kind, very encouraging."

"He's one of the great masters," says the great drummer Jack DeJohnette who first played with the saxophonist when Miles Davis was going electric in 1969. "He has such imagination on his instrument. And he writes exciting pieces. He's fantastic."

Shorter's quintet—with Patitucci, pianist Danilo Pérez and drummer Brian Blade is one of the finest working units in jazz and the focus of Shorter's work for years now, the first time in his blessed career that he has held the same configuration and personnel for so long. Their concerts are examples of four people in conversation. The topics change. There might be inside references. There can be confusion as well as great unity. They play as in-the-moment as any group, and the joy of their labor is obvious on their faces. They get lost. They discover. Their 2013 release, Without A Net (Blue Note), is a great example of their work and the title is an accurate description of their on-stage adventures. Shorter does not want a well-oiled presentation.

The meaning of the often-debated word "jazz," to Shorter, is "I dare you." He exemplifies it.

"Don't play music lessons, Art Blakey would say," says Shorter, who then effects a dead-on Blakey voice impersonation. "'I don't wanna hear that. Tell me a story.' When I talked with Miles [Davis], we kind of talked like this, like we're talking now, and Miles would say a couple of times [in perfect Miles raspy voice:] 'Why don't you play that.' In other words: play what you're thinking. Don't play music. Play a story.' What do you play after you play 'Once upon a time?' What comes next?"

That outlook makes Shorter's playing what it is today. Darting. Shifting. Sometimes complex. Not always furious like his days with Davis' Second Great Quintet, or in long serpentine layers like on his 1960s Blue Note records. It's not the same style he brandished in his hometown of Newark, N.J., when he was known as "The Jersey Flash" because of his quicksilver runs on the saxophone.

"There's no real approach anymore," he says of his playing. "The challenge is to be in the moment and the thought of playing or writing what you wish for. What you wish the world to be like. Or playing what you see. What condition the world is in today. A lot of loose ends. And also playing music that you can't anticipate. Uncertainty? Play that. We have to learn to deal with uncertainty and dialogue with the unexpected and dialogue with the unknown. Because the unknown can not be rehearsed. How do you rehearse the unknown? It's something that's coming out of the human existence that's making us evolve and grow. On a humanistic level, we're pulling out of ourselves what we didn't know was there. That should be telling us a whole lot about eternity. No such thing as beginning or end in life."

He adds, "The mission of an artist, or a human being, is to celebrate the artistry in every human being. There's a phrase Esperanza [Spalding] wrote: 'Wake up and dream' [for the Shorter composition "Gaia."] As opposed to, "I Wake Up Screaming," That first movie [1941] with Betty Grable and Carole Landis."

Many musicians study hard, bury themselves in acquiring technique, listen to all the masters, then come as if they're reading a book—albeit a really good one—but not writing their own stories. Not Shorter. He's had the benefit of experience and went through growing stages like anyone else. Yet he was always an off-the-path thinker. He skipped school as a youngster, but wasn't idle. He wasn't up to mischief. He slipped away to movies houses or caught bands playing matinees. He was learning. He didn't follow the crowd then, and his career choices, his playing and his composing are the same. As different as the movies to which he's so attracted.

"I say sometimes I'm writing music for movies that will never be made. Or that won't be made right now," he says. "Life is the ultimate movie, to me. Life is the ultimate adventure. Why not be curious enough to have fun studying it. Live while you're studying it. Don't think that studying is going to put a damper on your ideas... That's a lie." The study Shorter refers to is one of life and what goes on around people. Technique, he notes, allows musicians to play something that relates to the moment. "Then you don't have to worry about a final exam."

"The fact that somebody doesn't want to investigate life, investigate what somebody's talking about on TV, investigate for themselves, is an indication that they failed the final exam already. They are final. [They are] to be walked on and used and led and anesthetized. So they can't wake up and dream."

Roney played with Shorter in 1992, after the death of Miles Davis, when his former great band—Herbie Hancock, Ron Carter and Tony Williams, with Shorter—did a tour and album in tribute to the master. Roney was selected for the trumpet role. He's been friends ever since with Shorter. A musician par excellence himself, he calls him "one of the greatest tenor /soprano saxophone players—also artist and composer—of all time. Him and John Coltrane are the torch bearers of that creative unity. Of trying to unite the achievement of what an individual was blessed to be able to do, or can evolve to do via art, music, mind, soul, spirit. When John Coltrane died, [Shorter] was left with that. Sonny Rollins was also one of the great ones, but I think Wayne shares that more with John Coltrane in that essence of trying to keep attuned to the evolution of where we are as a people."

"With Wayne's music, he is able to play the most creative things and found beauty in all the notes that he played," says Roney. "If you listen, there's always a lyrical beauty in his playing. It's a bit like John Coltrane's but it's different. Trane's beauty and lyricism speaks of a oneness seeking a higher... seeking god, or seeking to unite with god. Wayne does that too, but he celebrates the beauty in human beings. The beauty of love, the beauty of day-to-day stuff... Trane's beauty came from connecting to a love from above. Wayne's came from a love within."

He adds, "It's no accident that Miles' two greatest partners in his bands were John Coltrane and Wayne Shorter. That's no accident."

"Wayne is one of the greats. He's an absolute jazz master, one of the greatest composers in jazz and, in my opinion, in modern music," says Joshua Redman, one of the great saxophonists of his generation, once removed from Shorter. "There's something about listening to Wayne's music and his playing... The notes aren't just the notes. They get to something else. There's an emotional resonance that's beyond the sound and the notes themselves. With Wayne's music, you get that sense. There's a visual aspect to his music and a poetic aspect that's omnipresent. Every note, whether it's a song he's writing or a phrase he's playing on the saxophone, every note has a kind of poetic and visual quality to it... there's something really transcendent and 'other' about every note that he plays and every note that he writes. That's kind of the ultimate in jazz."

Shorter is long considered one of the elite composers in the history of American music. To him, music is ever living. "When people say something is finished, that's like a consensus. That's just an opinion," he says in his inimitable fashion. "'That's the end of that song.' No. the song's just sitting there. That's not a law." His explanation veers from music to people.

"It hits us in the head ... those tiny things that husbands and wives put under the rug or just ignore. Like large executive boardroom meetings and big political governments and everything. Like, you knock a penny off the table and rolls way under the desk. You have to get down on your knees to get that penny. Or you forget it and say, 'Hey, that's just a penny.' But to me, when the penny falls off the table... Or a cufflink. If you drop it, it always goes into a place where you have to get a broom [to get it out]. That's nature's dialogue talking to us about something. It's talking with us. If we ignore that, stuff that we have to get down on our knees and get together, we're not able to handle big stuff. Nature is already training us. The natural order of things. The natural disorder of things."

It calls to mind what Michelle Mercer, author of the biography Footprints: The Life and Work of Wayne Shorter, means when she says Shorter "talks like he plays, in a kind of improvised cosmic poetry" but with "deep thoughts that lead to occasional bursts of insight."