By Glenn Astarita
December 27, 2013
Sign in to view read count 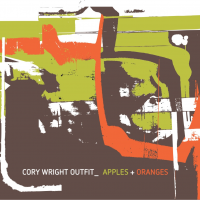 Oakland, California based reedman Cory Wright (Anthony Braxton, Vinny Golia & Yusef Lateef delivers a manifold and juxtaposing ensemble date on Apples + Oranges. It doesn't take too long to determine that the album poses a surfeit of diagonally opposed viewpoints. Other than the highly emphatic and synergistic group-centric output, Wright's compositions hit the mark, and this is one of those very special endeavors that excites, entertains and sustains interest.

Wright's involvement with visionary composer and improviser, Anthony Braxton seems to have assimilated into some of these pieces. However, the band's buoyant mode of operation is coupled with a feisty disposition. They execute highly charged free- bop, featuring whirling sax choruses by Wright and Evan Francis while flirting with the chamber-jazz element during "Low Impact Critter," modeled on incongruously arranged metrics and spunky multipart dialogues amid several paradigm shifts and sprightly aerial assaults.

Wright leads the Outfit through bracing swing, bop, and ballad segments via shifting parameters that seamlessly flow and interconnect. Each piece contains massive doses of pop and sizzle. And "Whaticism," is a song-form designed with unorthodox extended note opuses that burst out of nowhere, reinforced by Lisa Mezzacappa's earthen-toned bass notes, leading to a pre-planned breakdown. However, the "The Sea and Space" contains a sleek luster due to Francis' complex flute phrasings in unison with Wright, and trombonist Rob Ewing's burly solo. Here, the ensemble yields a controlled semblance of well-coordinated abstractions.

The musicians dish out minimalism and microtonal, free- form dialogues while also reverse-engineering various activities. Other regions of sound are constructed on pumping grooves and, changeable motifs that are heavily outlined upon variable cadences. Consequently, "St. Bruno's Purview" is a mid-tempo burner atop a quasi, New Orleans 2nd line March pattern, hued with animated horn passages. Without further ado, Apples + Oranges warrants serious consideration for a spot in many year-end top-10 lists.