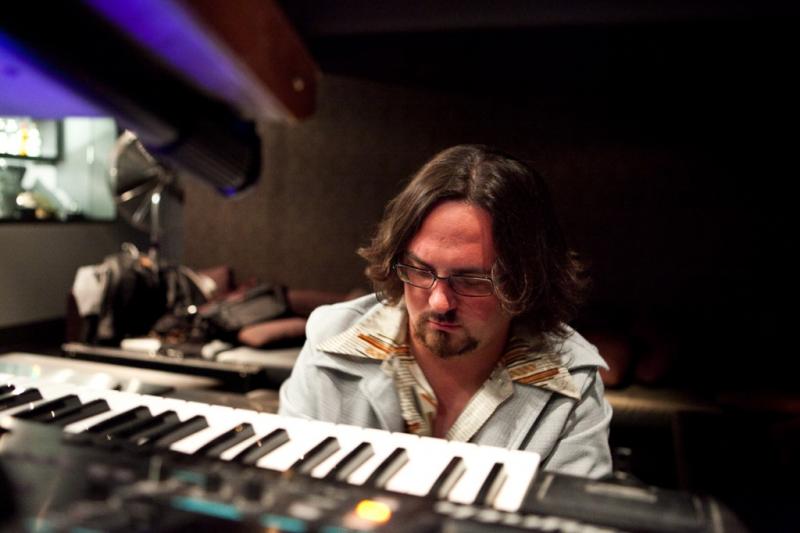 Jay Smith has performed with dozens of groups all over California, France, Italy, Germany, and Spain in a wide range of music, from bebop and gypsy jazz to Latin rock and funk. He has worked with groups and musicians as Kelulu, Mento Buru, The Fresno Philharmonic, David Baron Stevens, Andre Bush, Mike Dana, Velorio, Zambra, Patrick Contreras and, along with drummer Jonathan Martinez, founded The Modern Jazz Trio, which was featured in Bakotopia Magazine, the Bakersfield Californian and FACE Bakersfield, among others.

He has been on several radio stations and TV stations including Bakersfield's Channels 17, 23, 29/58 and 107.1 FM KRAB as well as several times on Fresno's 90.7 KSFR to name a few. He is a regularly featured artist and clinician at the Bakersfield Jazz Workshop.

Teachers and/or influences? I started out as a classical pianist until I was introduced to jazz by Mike Dana, who studied with Joe Pass. My first jazz records were of Django Reinhardt and Stephane Grappelli's Quintette du Hot Club de France. After that, I grabbed every jazz album I could get my hands on.

I knew I wanted to be a musician when... I first started taking formal lessons. I went to college really young (14) and really started taking lessons then.

Your sound and approach to music: I try to incorporate what I've been told by dozens of other musicians greater than myself: learn the theory behind the what makes the music work then play like yourself! It's not enough (especially in this day and age) to know how to play standards well; it really comes down to bringing the music to that next level and making your own impact on the music.

In that respect, what I'm doing and trying to do hasn't taken off yet. I find myself actively going against the grain of what people did before me, not as a rebel action, but more emulating those before me did.

What do Louis Armstrong, Charlie Parker, John Coltrane, Miles Davis, Ornette Coleman, Bill Evans, Thelonious Monk, Art Tatum, Art Blakey, Reinhardt, Ella Fitzgerald, Billie Holiday, Dizzy Gillespie, etc. have in common? They all did something that was innovative at their time that wasn't entirely accepted at first. Now, some of these peoples' full success hasn't come to fruition yet, but the impact of their playing can be felt by the musicians that are trying to recreate what they did.

I think a ton of people get way too caught up in trying to emulate these people to perfection and expect that if it doesn't sound the way that one of the Greats did it, then it's not right. What's the point of sounding like Coltrane? I'd much rather listen to Coltrane play than you any day. I want to hear you and I think that's what shines in these performers is that clearly, they have an definable element that makes them distinctive.

Your teaching approach: This is what I told a student when asked the question: "Jay, what do you think is the biggest thing I need to work on to improve my solos?"

First things first-no performance will ever be perfect. Even when you think you know what you're doing, there will be that night that you realize you have more to learn.

Realize that a good solo has to have shape to it, just like a composition (because that's what we're doing is spontaneously composing).

With other styles of music, you have as much time as you want to come up with a minute or two of music whereas with jazz (or any improvisational music), you have a minute or two to create a piece of music. It'll never be perfect but you can get pretty close.

Listen to what other people have done and are doing. There are things that work in a solo that have been tried and proven (stuff that was done in the 20s is still being done today, believe it or not).

Check out Django Reinhardt, Robert Johnson, Lowell Fulson, Howling Wolf, Joe Pass, Charlie Christian, Andre Bush (a good friend of mine and amazing guitarist), David Fuse, Pat Metheny, Carlos Santana, Al Di Meola, The Mars Volta, (I could give you dozens more but this is a good starting point I think). You don't have to listen to just guitar players but start with people on your instrument and branch from there.

Absorb what these people have done into your playing. Try to learn every lick and really understand what it is they did. The only way to establish yourself is to know who came before you, what they did and the impact they've made in the music.

Know your instrument extremely well. Know every major and minor scale without any hesitation and every chord/scale relationship. Playing at the level you want to play at requires less thought and more instinct. Thought, when playing, completely gets in the way which means you need to do know your instrument so well that you don't have to think about where things are or how to reach a note in a particular key. This allows you to focus on interacting with the other musicians you're playing with to create more cohesive music.

Most importantly—don't get comfortable! If you find yourself doing the same things and sounding the same, try something different. Music is a lifelong endeavor and you'll (hopefully) still be trying to get better 30 years from now.

There's always something to learn and somewhere new to go on your instrument. The tough thing is that it's up to you to find it.

I've always wanted to put together a large band (30 piece+), but that's almost impossible to tour with these days considering costs.

There a several. I actually prefer to play smaller venues just because they are more intimate. I feed off of the crowd and that's hard to do in larger arenas or TV. It's almost like your isolated and I find it's much harder to replicate for camera what you might sound like at a live, intimate venue without that feeling of people waiting to see what you'll do next.

Your favorite recording in your discography and why? As clich as it sounds, my two current projects (with my groups Kelulu and my new trio, The Jay Smith Trio) are my favorites because I feel like I'm making two albums with my friends.

The first Jazz album I bought was: Djangology, by Quintette du Hot Club de France. It was the first recording the group did after World War II (Stéphane and Django parted ways; Reinhardt returned to Paris at once, leaving his wife behind. Grappelli remained in the United Kingdom for the duration of the war. Some say it doesn't have the magic of their earlier recordings and I can see that. Still, for me, I was amazed at what could be done without drums.

What do you think is the most important thing you are contributing musically? Nick Rail Music, The Arts Council of Kern, Younger Audiences, Arts for Learning and the Bakersfield Jazz Workshop are the companies that I'm teaching with currently and I take a lot of pride from being with these organizations.

I get to teach residencies with most of these organizations (which is fantastic), but with the Bakersfield Jazz Workshop, I volunteer my time once a week with a small class of eager high school kids. In the three years that I've taught with the organization, the kids have come a long way. They've even open up for Jason Marsalis just recently. So I'm very pleased to see these kids make their way into the world of Jazz and I see much of myself in all of them when I first started.

I love to draw and paint but I never get a chance to do so.

Stanley Clarke Band, Jazz in the Garden (Heads Up));

The Bad Plus, Prog (Heads Up);