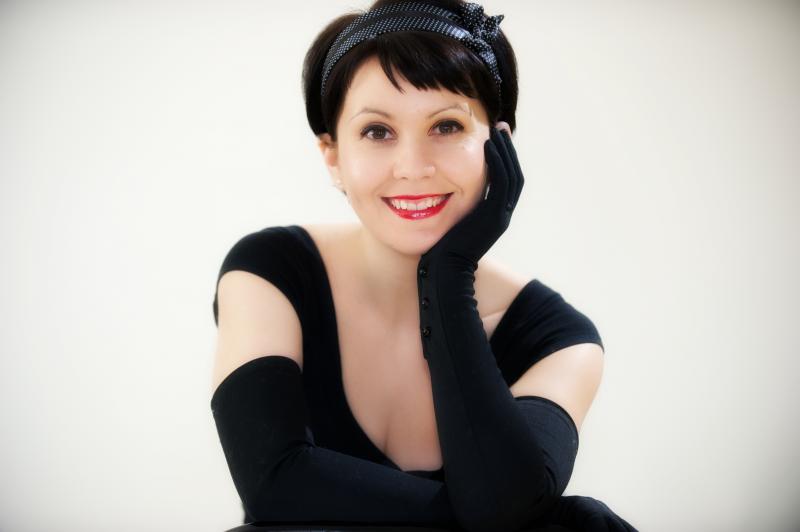 By Ana Velinova
August 27, 2014
Sign in to view read count
Meet Ana Velinova:
Jazz vocalist and songwriter Ana Velinova has inspired audiences around the world with her wide range arstistic talents. With repertoire extending from Mozart and Stravinsky to Ellington, Dorsey and Jobim, Ana has shared the stage with many accomplished jazz artists including Bob Moses, Neil Swainson, Don Thompson, Brad Turner, Willard Dyson and Miles Black to name a few.

A native of Sofia, Bulgaria, Ana has lived and performed in major US and Canadian cities.

A highlight of Ana's Spring 2014 Season is the second release of her album The Thief and the release of her two new albums December Wishing, a holiday album of original compositions and Embrace Me featuring Juno Award winning musicians Phil Dwyer on saxophone, Miles Black on piano and Rene Worst on bass. She has released five albums under the independent record label Ward Street Records.

Ana holds a Master's Degree in Jazz & Contemporary-Classical Voice Performance from the Longy School of Music in Boston, undergraduate studies in Vocal Jazz from the Musician's Institute in Los Angeles and a diploma in classical guitar from the National Music School in Bulgaria. In addition to her solo career she is well known for her entrepreneur work as a vocal coach and vocal workshops facilitator.

I knew I wanted to be a musician when...
I was born in an Eastern-European family of musicians and music lovers where music education and appreciation was something very natural, part of everyday existence. My mother, a concert classical pianist, my grand-father a composer, conductor and bassoon player and my grand mother a singer had great influence on me. Due to the limitations of the import of recordings from other countries we grew up performing and listening to classical music and Bulgarian folk. My music education began at the tender age of 4 and ever since music has been the ultimate way of self-expression in the world.

Your sound and approach to music:
As far as writing songs or the selection of songs from the classical jazz repertoire I always put the importance of beautiful lyrics and melodic lines on the front line. I believe that vocalists have the added privilege of being story tellers and so I try to focus on clear and well expressed diction so the listener can hear the message of the tune. I am a big lover of the study of Art songs and in particular in the American jazz and classical art song genres. In addition, the choice of my band members is of great importance. I feel fortunate to have had the opportunity to perform and record with superb musicians and hope to continue to collaborate with wonderful players.

Your teaching approach:
As an educator and choral conductor of college level students as well as youth and children I have learned that there are a few key ingredients to being a useful educator: Teaching the importance of discipline and hard work, solid vocal technique as well as music theory, sincere love and care about the progress of the student and focus on bringing out what makes each student unique and different; in other words helping students find their own "voice."

Your dream band:
It has been a true joy to work with musicians who I believe are extraordinary: Bassist Neil Swaison, drummer Willard Dyson and Bob Moses, Saxophonist Phil Dwyer, and pianists Miles Black and Misha Piatigorsky. Of course, I would be honoured if I could have a chance to work with a few wonderful musicians that I admire: Herbie Hancock, Chick Corea, Eliane Elias, Jack DeJohnette, Ahmad Jamal, Cuong Vu, Pat Metheny, Rosa Passos, Esperanza Spalding to name a few. Sometimes dreams come true!

Road story: Your best or worst experience:
While performing for Jazz Vespers in Vancouver Canada, a lady was so moved by the lyrics of one of my own songs that she rushed towards me after the end of the tune, grabbed my hands and had me kneel with her in front of the audience while she loudly recited a Christina prayer for my salvation.

Your favorite recording in your discography and why?
Very hard to choose. Lately I have been moved by Kurt Elling's Nightmoves for its exquisite vocal performance and arraignments, extraordinary lyrics and the beautiful collaboration among the musicians.

What do you think is the most important thing you are contributing musically?
Continuing to perform, record, make videos, write songs and teach with joy despite the difficult financial times and cuts in budgets all over the world.

Did you know...
Did you now that I didn't speak a word of English until I was 18? Or that during communist times if a Bulgarian jazz musician was lucky to be allowed to visit Turkey or another European country they had to strap their favorite jazz records with tape around their bodies, underneath their clothes so they could sneak the vinyl back into the country pass the military officers (a fascinating fact I learned while working on my Master thesis "Bulgarian Folk elements in Contemporary Jazz.")

How would you describe the state of jazz today?
In some areas exciting and new, in other areas needing fresh approach, self-respect, style and sincerity as well as massive funding!

What are some of the essential requirements to keep jazz alive and growing?
In my humble opinion keeping jazz alive is based on keeping the memory of legendary musicians and recordings alive; i.e. educating young people about the roots of it all and also being very active in writing and arraigning NEW music and being constantly present in the "eye" of the audiences worldwide.

What is in the near future?
Very excited about 3 new project. 1. The second release of my album 'The Thief' which is starting a professional radio campaign in July. 2. The release of my first holiday album which will feature my own compositions intended to inspire people of all Faiths and believes. 3. The release of my fifth album 'Embrace Me' featuring three legendary Canadian jazz musicians: Miles Black on piano, Rene Worst on bass and the one and only Phil Dwyer on saxophone.

What's your greatest fear when you perform?
Forgetting lyrics.

What song would you like played at your funeral?
For All We Know -my album 'Softy.'

What is your favorite song to whistle or sing in the shower?
My own new song which I am about to write once I jump out of the shower.

If I weren't a jazz musician, I would be a:
Dancer.