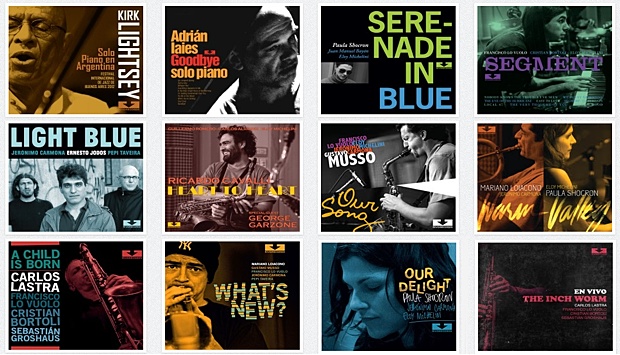 By JAKOB BAEKGAARD
May 15, 2013
Sign in to view read count
In the New Grove Dictionary of Jazz, a blue note is defined as: "A microtonally lowered third, seventh, or (less commonly) fifth degree of the diatonic scale, common in blues, jazz and related musics."

Moving beyond musical theory, the term is most commonly associated with the groundbreaking jazz label Blue Note, founded in 1939 by Alfred Lion and Francis Wolff.

The label epitomizes the golden age of modern jazz in the 50's and 60's where a perfect balance was struck between tradition, in the shape of blues and standards, and a personal expression that allowed the music to flourish into highly sophisticated art, without losing the basic bodily feeling of the groove.

To many people, Blue Note still remains the gold standard of jazz, and this is also the case with Justo Lo Prete, who runs the exquisite Argentinian jazz label Rivorecords, which was formed in August, 2010. As he says: "We mainly record standards and try to recover some of the things jazz had in the '50s and early '60s, as regards the aesthetics of the music, the recording technique—all musicians are recorded in the same room and we choose the best take, without editing—and to a certain extent the cover art, design and concept of those records."

Taking a look at a record like trumpeter Mariano Loiacono's What's New, it is clear that there's an occasional touch of inspiration from Blue Note's famous graphic designer Reid Miles, but the releases on Rivorecords have their own distinctive style and approach, as Lo Prete explains: "I really like to be involved in that specific aspect, as I have been looking at record covers and booklets for the last 25 years! I consider myself responsible for this approach, with its hits and misses. As you can see, I favor the musicians' photo aesthetic on the CD covers, and in the inside or the cardboard triptychs. Horacio Sbaraglia is the label's photographer—almost all of the cover/inside CD photographs were taken by him. Horacio and Carlos Melero (engineering) deserve special mention, as both work with loving care, and completely ad honorem for Rivorecords. As for liner notes, I generally find them quite uninteresting. From my point of view, to write an interesting liner note, which adds useful or valuable information, is VERY difficult; so with the internet overloaded with information, just listen to the music and enjoy it. Keep things simple. Just jazz standards; no science behind, I guess." 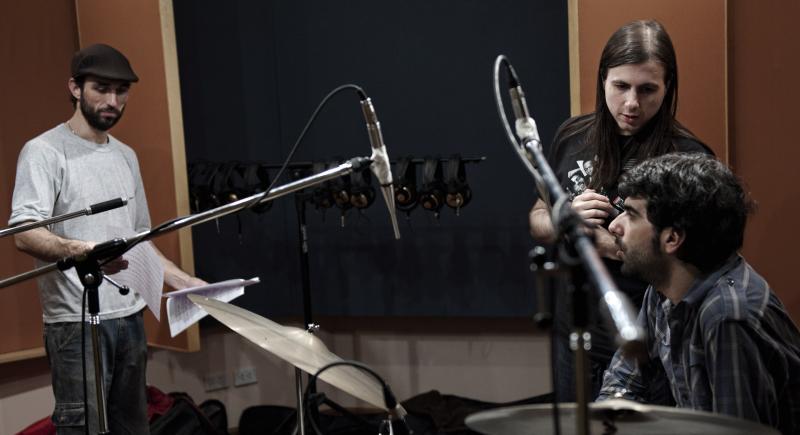 
As a label owner and producer, Lo Prete has an active approach to record making: "I try to get involved at all stages of the process, from the moment we start to envision the record to the day it is launched. Although I stick to these rather strict principles, I try to give musicians as much freedom as I can when it comes to choosing the repertoire and in some strictly musical aspects—tunes and arrangements and so on. As I am not a musician, I give them the point of view of a "regular" listener, and that helps to strike a balance between the opinion of a professional and that of an amateur. I think that is a healthy aspect."

When it comes to recording, a particular studio is preferred: "Rivorecords has recorded all of its studio productions in SoundRec, a studio I feel comfortable with. And the team of Ricardo Sanz, main engineer at SoundRec, and Carlos Melero, a very nice man and close friend with tons of experience and a huge ear, work wonders as far as the sound I have in mind, and in a very relaxed atmosphere. I really think that is reflected in the music. I tend to favor an in-studio-live approach."

Lo Prete highlights pianist Paula Shocron and trumpeter Mariano Loiacono as two musicians who have helped to shape the label's sound, but as he says: "I feel comfortable with most of the records, and the musicians I´ve worked with so far. I really like piano trios, and I´m very happy with the piano trios Paula Shocron, Ernesto Jodos and Francisco Lo Vuolo made for Rivorecords. Maybe the latter is not as well-known as Paula and Ernesto, but he is a very very sensitive player."

Every record in the catalog matters, but as Lo Prete says: "Well just to avoid answering the usual "every record I´ve produced holds a special place..." I will say that I´m a bit biased towards Gustavo Musso´s Our Song, as I have always dreamed about "making" some kind of Art Pepper tribute thing, and Gustavo turned out to share my view, and came up with a beautiful, and beautifully short, record. To be fair, also being able to bring the great Kirk Lightsey from Paris- -in association with the city of Buenos Aires Government, for the city´s Jazz Festival—and recording him in a very nice venue was great; finally, saxophonist Carlos Lastra's double live CD was a personal wish."

Speaking of the ideal record in more general terms, he says that it is: "The one that strikes a balance between melody, swing, spontaneity—which, I think, can be achieved even when the musicians play arrangements, as opposed to the jam concept—and the instrumental quality of the musicians." 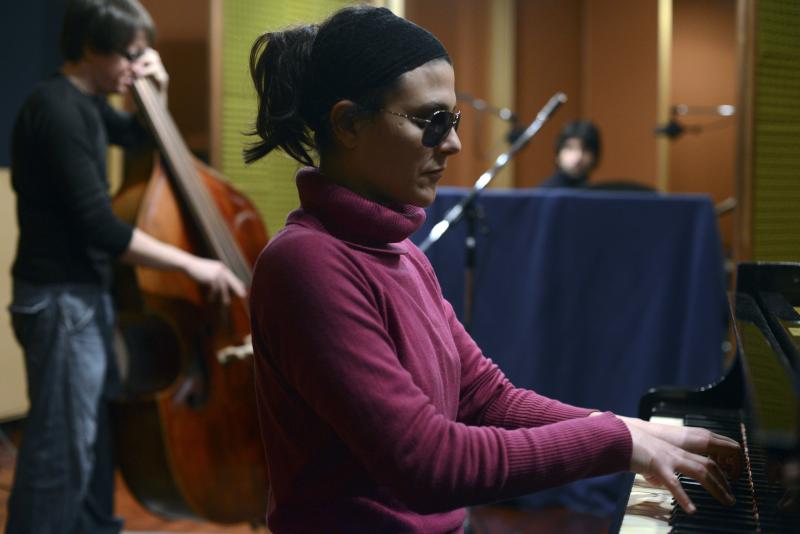 
The audience seems to agree with Lo Prete's definition of a good record because so far the reception has been positive: "The label has been received in a quite enthusiastic way here in Argentina, where conditions are very difficult for jazz musicians. Jazz fans, in general, are very appreciative, and are always encouraging us. With honorable exceptions, the media pays little attention to jazz recordings."

Elaborating on the climate of jazz in Argentine and Buenos Aires in particular, he says: "In Buenos Aires the climate is good. A lot of tourists visit this city, which, somehow, strengthens such climate. However, the jazz world is "small" compared to that of any other popular music. I think it happens in any part of the world. So there are not many labels around; it also seems to me that the fact that the industry is at a stage where there is a lot of uncertainty about the format of the music does not help. Also, in Buenos Aires, there are not many clubs featuring only jazz music. The economic issue does not help either. Setting up a club involves tackling many economic and administrative problems. For example, a decent piano costs quite a fortune in Argentina. There are really good musicians across the country. Technically speaking, musicians have grown more professional in the last few years. Outside Buenos Aires, things are tough, even in large and important cities."


Still, considering the limitations, Rivorecords has secured good distribution: "Rivorecords is being distributed by DBN, the largest distributor in our country. It has allowed the label to be in lots of places of difficult access for an independent 'handcrafted' company."

With distribution in place and the economic ambitions toned down, Justo Lo Prete knows what he wants: "Well, my goal is to make "sincere" records, nicely packaged; nothing too ambitious, actually."

So far, Rivorecords has released twelve records, with more on the way: "If everything goes well, Paula Shocron's solo piano comes next, recorded on a very nice Fazioli piano, the same we used for the excellent sounding, just released Adrian Iaies solo piano CD, and also a nonet recording lead by Mariano Loiacono."

Summing up the situation of the label, he says: "I am satisfied with what I have achieved so far. I have done it with love, dedication and great care. I have no long-term plans for the label. I just want to show the genre to other people in this country, and somehow be of some help to many of the really good musicians we have in Argentina deserving to be better known."

There certainly is a lot of jazz talent in Argentina and the proof can be found in the catalog of Rivorecords where the blue notes abound and the spirit of the '50s and '60s is revived.

While Rivorecords has a clear preference for Argentinian musicians, an important exception is the solo record of American pianist Kirk Lightsey, which captures him in a stellar performance at Buenos Aires Jazz Festival 2012.

Lightsey's roots are firmly planted in the hard bop idiom, but he has also worked as a session pianist for Motown Records in the 60s. Rhythm 'n' blues is in his blood and this becomes evident in the gutsy, rollicking outbursts that suddenly break through the contemplative mood in his version of Wayne Shorter's ballad "Infant Eyes." Lightsey has the whole history of jazz and blues in his hands and is able to use it at will in epic explorations of depth and variety. His percussive touch on the piano brings out the rhythmical elements in the instrument and makes it dance, but he is also capable of gently nurturing a pretty melody without becoming saccharine.

What is most impressive, however, is how he changes organically between styles and tempi while keeping track of the melody. His own originals "Habiba" and "Heaven Dance" hold up well in the company of compositions by Dave Brubeck, Tony Williams and Phil Woods. Here is an old master at work that sounds as if he has discovered his second youth.

Another solo piano session on Rivorecords is Goodbye by Adrián Iaies. While not as eclectic and fiery as Lightsey, Iaies concentrates on conjuring a pensive mood, but there's still plenty of room for sunshine when he gives a playful version of the standard "When You're Smiling" with lines full of light, sudden stops and abrupt turns.

Iaies greatest strength is his clarity of tone, which truly shines on the Fazioli piano praised by Justo Lo Prete. His improvisations are a joy to follow as he teases out melodies with bell-like clarity and emotional depth. He is a man completely in tune with his instrument. This is also underlined in the beautiful foldout photography that adorns the interior of the album. A close-up of the piano strings resembles an ancient harp and Iaies is just like a poet who plays his "lyre" with poise. On this album, he is not an epic improviser. Most of the pieces clock in at well under five minutes, but he has the ability to make the music short and profound.