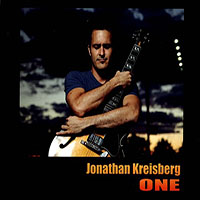 The liner notes may say no overdubs or loops were used, but Jonathan Kreisberg might just as easily have included that "No guitars were harmed in the making of ONE." Beyond work with artists like vibraphonist Joe Locke on Sticks and Strings (Music Eyes, 2007) and organist Dr. Lonnie Smith on Spiral (Palmetto, 2010), the guitarist has slowly built a personal discography that includes the particularly impressive The South of Everywhere (Mel Bay, 2007) and Shadowless (New for Now, 2011). Kreisberg may come from a progressive rock background but has, over the past fifteen years, evolved into a virtuoso guitarist who, nevertheless, never substitutes style for substance.

Still, it's a ballsy move to turn to that most exposed of contexts—the solo recital—and to do so without the looping and overdubbing so often used to allow others access to more expansive sound worlds. ONE covers considerable territory with nothing more than one man, one guitar and, on a couple tracks, some effects to broaden Kreisberg's palette.

It's hard not to think of seminal solo guitar innovator Joe Pass on Kreisberg's bright take on Juan Tizol's "Caravan," and a set-defining, similarly acoustic look at saxophonist Wayne Shorter's "E.S.P." that combines high-velocity, cascading phrases with ethereal abstractions, only to resolve into an unexpectedly Latin-esque main section. Kreisberg's language is, however, more modernistic, and here—and throughout the album—Kreisberg creates an impression of multiple guitarists by combining instrumental mastery with sleight-of-hand, effortlessly moving between bass, chordal and melodic roles to simultaneously imply all three.

Kreisberg resorts to a clean, warm, hollowbody electric tone on Baden Powell/Vinicius De Moraes's classic "Canto De Ossanha"—one of a number of ONE's covers that have been recorded almost ad nauseum, but which Kreisberg makes his own through distinctive arrangements and melodic invention. Kreisberg nails Leonard Cohen's often-covered "Hallelujah," combining respect and irreverence as, in an extended coda, he layers dissonances that, nevertheless, remain completely in context—Cohen's melody lines are largely intact but moved a half step or three away from the tune's harmonic center, their tension finally resolved as Kreisberg returns to consonance to finish the tune with some impressive finger-picking.

Kreisberg kicks in more overt effects on ONE's two originals. On the serpentine "Without Shadow," his guitar sounds more like an organ," while on the dark- hued "Escape From Lower Formant Shift," Kreisberg's heavily overdriven tone harkens back to his pre-jazz days. But in a set that also includes other chestnuts like "Skylark" and "Summertime," Kreisberg's originals serve notice of his broader concerns.

Kreisberg may love standards like "Tenderly" and "My Favorite Things," but what he does with them is never less than thoroughly contemporary. ONE may be 46 minutes of one man, one guitar, but in Kreisberg's hands it becomes a master class in just how unlimited that seemingly reductionist context can be. Truly solo jazz guitar recordings are few and far between, but with ONE, Kreisberg not only pays homage to past masters like Pass, George Van Eps and Lenny Breau, he makes clear that here, in the new millennium, he's unequivocally worthy of being mentioned in the same breath.