By IAN PATTERSON
April 30, 2013
Sign in to view read count
Country Cooking was broadly panned at the time by critics for being too bland and for using Ellingtonian arrangements but the short audio clip of the album that Eato played in the session was a reminder that so much of the character of South African music is defined by melodies, and that the search for dominant, or complex rhythmic patterns in all South African music is perhaps a European expectation of a projected authenticity. An equally poignant title for Eato's paper might have been "Whose Authenticity?" The paper also sounded a cautionary note to reviewers and critics, reminding them of the poverty of sweeping generalizations. 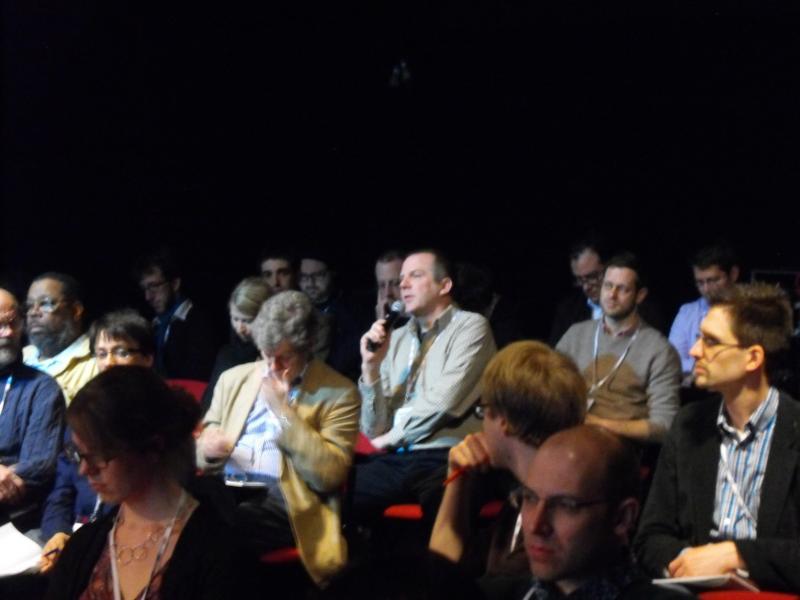 The timing of the Rhythm Changes: Rethinking Jazz Cultures conference, coinciding with Smithsonian Jazz's annual Jazz Appreciation Month may have been a coincidence, but as one conference academic pointed out, the Smithsonian Jazz's slogan started out in 2002 as "Jazz, Made in America, Enjoyed Worldwide," morphing in 2005 to "Jazz, Born in America, Enjoyed Worldwide"—an improvement, but a position that nevertheless suggests that jazz is only authentic if played by Americans, and by extension, that jazz is passively consumed around the world.

The questions of authenticity in jazz and that of national jazz sounds were two recurring themes throughout the conference, and judging by the global reach of the papers, ones of universal concern. There were several papers on Russian jazz, of which Diana Kondrashin—writer for Jazz.Ru, the Moscow Times and a recent recruit to All About Jazz—gave an insight into the shifting perceptions of jazz in Russia over the course of the last 90 years—and the challenges it faces today—in her paper Contemporary Russian Jazz: Adaption, Tradition or "High Treason"? According to Kondrashin, jazz grew in popularity during WWII as it was associated with Russia's allies in the war against Hitler, but as the Cold War emerged jazz was seen as "alien music," and playing or listening to it was akin to collaboration.

The end of the Cold War ushered in a revival in jazz in Russia with several dozen jazz festivals of all stripes popping up since the 1990s and a Russian language magazine (and website), Jazz.Ru launched in 2007. Russian jazz, as Kondrashin observed, is not exempt from the type of feuding that has characterized the various branches or movements of jazz in America over the years, with Russian free-jazz musicians running afoul of more traditional, mainstream jazz musicians.

The Cold War that Kondrashin referenced in her broad sweep of the history of Russian jazz lay at the heart of Rudiger Ritter's paper, Broadcasting Jazz into The Eastern Bloc: Cold War Weapon or Cultural Exchange? The Example of Willis Conover. Conover's famous Voice of America jazz broadcasts, the paper stated, have always been mythologized as playing a part in the fall of Communism in the Eastern Bloc, but echoing keynote presenter David Ake's premise that jazz is experienced and valued differently by different cultures, the author challenged the popularly held notion of Conover the liberator. This thought-provoking paper presented a number of alternative scenarios, ranging from the innocuous, less heroic narrative (jazz appreciated simply as a valve to let off steam) to the more controversial (jazz utilized by the then Soviet government to stabilize society).

Jazz was inspired to a degree in the 1960s and 1970s by the Civil Rights Movement and Anti-Vietnam war sentiment, exemplified in Ritter's account of bassist Charlie Haden's arrest in Portugal in 1971 after a concert with saxophonist Ornette Coleman's group for dedicating his composition "Song for Che" to the liberation movements in the Portuguese colonies of Mozambique, Angola and Guinea-Bissau. At around the time of the colonial wars, as was illustrated in a paper entitled Jazz and Television in Portugal in the 1960s and 1970s, by Pedro Cravinho of the University of Averio, the TV JAZZ series was broadcast in Portugal. Cravinho suggested that music with a strongly African-American identity was at odds with the values of the regimes of Antonio de Oliveira Salazar and Marcelo Caetano, and represented an apparent contradiction in a state where censorship was the norm. Jazz per se was clearly not considered as subversive in Portugal at that time, and as E. Taylor Atkins remarked in his keynote speech, the symbolism of freedom, individualism and equality often projected by American writers on jazz may instead be replaced by the values of discipline, conformity and nationalism in other countries.

As American jazz was challenging fascist/communist regimes—or not, as the case may be—and spreading its gospel through U.S. State Department-sponsored tours the world over, the British traditional jazz revival of the 1950s and 1960s sought to color the New Orleans-inspired music with a decidedly British identity. In his paper, Questions of National Identity in the British Traditional Jazz Revival, the BBC's Alyn Shipton discussed the incorporation of English folk songs, typified by trumpeter Humphrey Lyttleton's reworking of "One Man went to Mow" and clarinetist Acker Bilk's red, white and blue waistcoats and bowler hats, to more subtle musical representations of British tradition and also of a changing society influenced by mass immigration from the former British colonies.

Shipton questioned whether the "trad boom" used British stereotypes as marketing devices and whether collaborations with Caribbean musicians were genuine expressions of the growing multi-culturalism of Britain. Certainly, Shipton recalled, the traditional-jazz revival was immensely popular in Britain, with Chris Barber selling out venues of several thousand people every night. One conclusion that Shipton drew was that just as the American jazz musicians of the 1960s had sought to escape the grasp of Charlie Parker's influence by forging new sounds, so too did British traditional-jazz musicians attempt to create a uniquely British brand.

Shipton, alongside Sebastian Scotney of London Jazz , Alexander Kan from the World Service and this author, took part in the Jazz and the Media Panel, part of a wider conference theme about the way jazz is presented and consumed these days. Just as jazz magazines face increasing competition from on-line jazz sources and social media, jazz radio is also challenged by consumers' new listening habits and by commercial/national radio's preference for more popular genres of music. Shipton's Jazz Library show on BBC Radio 3 attracts 200,000 listeners for the one hour show, suggesting that the audience for jazz is perhaps greater than the ten hours per week that the BBC currently allots for jazz. However, as Shipton noted, the BBC considers itself to be the home of classical music.

There was plenty of food for thought during the discussion and a healthy dose of shared optimism in the future role that the various branches of jazz media will play in advocating jazz. Perhaps, however, the inclusion of a hard-copy jazz magazine writer would have contributed to a wider debate, particularly given the precarious health of printed publications these days.

If the internet is reshaping how jazz is presented and promoted, then it is certainly exerting a major influence on the way it is consumed. In his paper Tuning to A Different Channel, Jonty Stockdale, from the University of West London examined new and emerging trends in the digital dissemination of music. Though CDs haven't disappeared yet, despite recent prophecies to the contrary, Stockdale stated that a tipping point has been reached whereby downloads now account for over 50% of music sales. By analyzing data from online content streams, Stockdale demonstrated that the large masses of individuals streaming are perhaps changing the perception of jazz—particularly when a '"jazz" search throws up Michael Bublé as the genre's number one representative. Another concern that Stockdale raised was the question of who will be responsible for the future digitization of old jazz recordings. If old jazz recordings are not digitized, Stockdale posited, there will come a day when they simply cease to exist. How, Stockdale asked rhetorically, will this affect the canon of jazz?

Repeatedly, discussion centered around essentialism—the search for or perception of a national jazz sound. In his paper Rethinking "European Jazz" through the work of Steven Feld, Tim Wall, from Birmingham City University took as his starting point the conclusions of anthropologist Feld's 5-year study using jazz cosmopolitanism to investigate the way musicians in Accra, Ghana absorbed and used the American jazz idiom. Wall turned his attention to saxophonists Jan Garbarek, Courtney Pine and Dudu Pukwana, and using the tools of cosmopolitanism, essentialism and re-enculturation—which Wall described as turning something from another culture into something that is your own—he addressed the idea that European jazz may have a distinctive sound and how individual cultures or countries in Europe may exhibit an approach to jazz distinctive to that in the United States.

Wall posited that Garbarek sounds the way he does not because he can't help it but because he has actively pursued his sound through hard practice, thus steering wide of the essentialist view—popular in the media—that there is an inherent Nordic sound. Another angle of Wall's paper was precisely the role the media play in propagating such notions.

Gerry Godley, founder and artistic director of the 12 Points Festival —one of the most important platforms for emerging European jazz talent—better described the so-called Nordic sound as "the sound of uninhibition" and acknowledged that in the first few editions of 12 Points "we were taken with the essentialism of European music," perhaps reflecting a wider trend in Europe—and possibly to some degree a self-conscious one—of celebrating sounds distinctive from that of the United States. Goldey added, however, that "as the festival has gone on we've moved further and further away from this idea." It would seem that European jazz, as vibrant and diverse as it is, is still juggling with its sense of identity.

An example of this is what Wall termed Pine's "multi-faceted identity"; when one thinks of Pine's transition from the sharp suits of the neo-traditionalist era of the 1980s to the Rastafarian look of the 1990's, his embrace of urban rhythms and his forays into music inspired by his Jamaican ancestry, his Afro-British and Afro-European identity then Wall—and Feld's— ideas on the affects of cosmopolitanism and trans-national jazz culture come more sharply into focus.

Several papers invited a reexamination of musicians of historical note: Barbara Bleij, from the University of Amsterdam, made a strong case for recognizing the contemporary ideas that saxophonist Wayne Shorter drew on, in her paper The Stellar Composer: The Intersection of Musical Cultures in Wayne Shorter's Music. Placing the Shorter pieces "E.S.P.," "Virgo" and "Infant Eyes" under the microscope of musical analysis, Bleij argued that Shorter's musical modernism—which has subsequently influenced so many jazz musicians around the world—has been conveniently overlooked by jazz critics, or else interpreted as his "genius," which Bleij suggested conforms to the predominant jazz narrative that celebrates "original voices" and "creative genius."