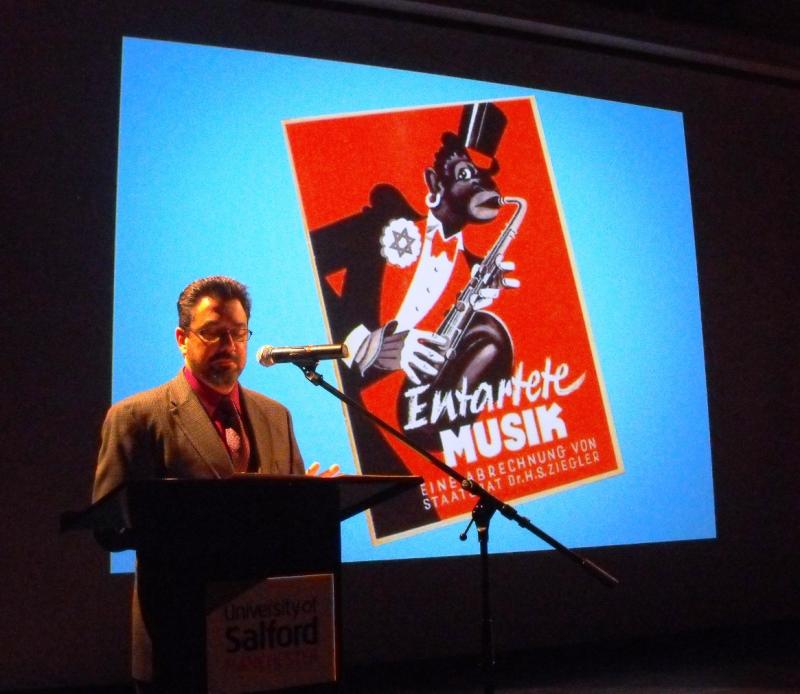 Atkins pointed to the presumption of some American writers who believe their understandings of jazz and its symbolism are universally shared. "Whilst they aren't always wrong," he acknowledged, "they frequently can be, when projecting onto others their own cherished values of freedom, individualism, and self-expression, when in fact discipline, conformity, and nationalism might be the 'message' of a jazz performance—indeed, we need look no further than outer space, to Sun Ra, to identify an artist whose stated aim was to cultivate discipline rather than freedom." Secondly, he pointed to "the additional irony of claiming that jazz portended the emancipation of the poor, the oppressed, and the colonized, when in many parts of the world it has actually been emblematic of the urban cosmopolitan classes, accentuating rather than ameliorating social cleavages."

The common denominator of Ake and Atkins' keynote presentations was their encouragement to take a fresh look at jazz, one that excludes either/or stances—not in spite of the complexities but because of them—and one that recognizes the universality of jazz and the diversity of circumstances in which it is, and has been, produced, promoted and consumed. In calling for a rethink, Ake, Atkins and the Rhythm Changes: Rethinking Jazz Cultures conference are calling for inclusion rather than exclusion, progression as opposed to retrogression, and universality in place of nationalism.

However, prior to the drawing of lines and the rattling of sabers, there was an opening reception/registration evening at the CUBE Gallery in downtown Manchester, where conference delegates could mingle in an informal setting and negotiate the tricky business of shaking hands whilst balancing wine and a buffet plate. A photographic exhibition by Paul Floyd Blake and William Ellis provided the backdrop to the evening. Ellis is an internationally renowned photographer who has exhibited his work at jazz festivals throughout the world, including two exhibitions at the American Jazz Museum in Kansas City. At the CUBE, Ellis was exhibiting samples of his One LP project, a study of artists portrayed with a favorite album accompanied by a bite-sized interview explaining the LP's importance to them. Ellis's "One LP" is now a monthly feature at All About Jazz.

Winner of the 2009 Taylor-Wessing National Portrait Photography Prize, Floyd Blake is known primarily as a photographer inspired by portraiture and landscape. A logical choice to bring a fresh perspective to jazz photography, Floyd Blake was commissioned by Rhythm Changes: Rethinking Jazz Cultures to record images of jazz music and its relation to space at the North Sea Jazz festival in Rotterdam, the Copenhagen Jazz Festival and the London Jazz Festival.

In keeping with the aims of Rhythm Changes: Rethinking Jazz Cultures to reconsider jazz, Blake's photography eschewed the archetypal "musicians on stage" shots, and invited the viewer to consider different perspectives of the festival spaces and the audiences' relation to those spaces. Jazz festivals have come a long way since George Wein's Newport Jazz Festival model in the 1950s, and in the early 21st century they are staged in locations ranging from civic halls to city-wide celebrations, and in geographic and topographic spaces as diverse as tropical islands, the North Pole and volcanic mountain ranges. Urban performance spaces vary greatly, from car parks and streets to marquees and pubs, from churches to squats and from converted factories to boats.

Anyone who subsequently attended Petter Frost Fadnes' paper The Performance Aspects of Contemporary Space: Negotiating New Rooms in Improvised Music will have come away with a greater sense of the possibilities of alternative urban spaces to alter both the performance dynamics and the audience experience. Fadnes, from the University of Stavanger, Norway, plays saxophone and electronics in The Geordie Approach, an Anglo/Norwegian trio that plays improvised music throughout a surprisingly large network of Trans Europe Halles or "culture factories" that crisscross Europe. 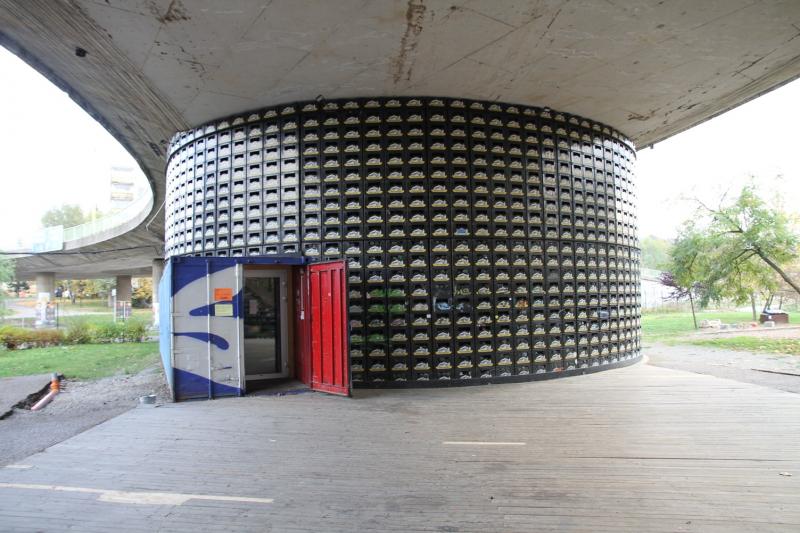 Abandoned factories have long served as centers for cultural creativity and community social spaces, and are magnets for subcultures and the marginalized. One need only think of Italy's numerous left-leaning centri sociali, initially squatted abandoned factories, the best organized of which provide child day-care, cinema, affordable food and drink, waltzes for the elderly, live music, recording facilities for up-and-coming bands, workshops and a forum for political debate and discourse.

As Fadnes pointed out, the 'culture factories' that his trio are accustomed to playing in "allow musicians to work outside the restrictions of heavily branded jazz venues or rock clubs." Fadnes described this as a "curious and liberating" experience as the musicians come face to face with an entirely new set of expectations and norms, which, he underlined, "adds to the capacity to fuel new ideas," as many of the restrictions that operate in traditional live music venues are absent, or at least radically different in these alternative spaces.

Some of the performance spaces that were part of Fadnes' slide show included an active train station, abandoned beer and tobacco factories, and curiously, a venue constructed entirely from beer crates (see above). The factory is an obvious metaphor for production and escape from bourgeois concert halls, Fadnes observed, and he went on to say that these alternative scenes are as vibrant as ever because of unemployment in Europe. What is apparent to anyone who has ever visited such "culture factories" is that they tend to promote volunteerism, political thought, and small-scale local economies, and provide a community space that's supportive of the arts.

Such alternative performances spaces are certainly not new and are to be found in the USA and Japan too, but what is new, Fadnes noted, is that they're increasingly organized. Indeed, Fadnes observed, local councils, national funding bodies and the EU are diverting funds into such cultural centers with the justification of arts funding (local sustainability), regeneration (gentrification) and branding (cultural capital and image building).

With many jazz venues closing down, musicians and the communities they come from are increasingly forced to be ever more resourceful in creating performance spaces, something which is bound to have an impact on the music produced- -particularly improvised music—and the way in which audiences relate to both the music and the new spaces they inhabit. These themes were also examined in freelance musician Ove Volquart's paper, Developing A Local Scene by Self- Organized Concert Series: Relations Between Performing Venue and the Development of (Jazz) Music, based on what he's seen from the perspective of the small, yet multi-national musical community in the German town of Göttingen.

The different spaces used to accommodate the live music that was part of the conference illustrated perfectly how music, space and people act on each other. Artist-in-residence, pianist/composer Matthew Bourne performed alongside saxophonist Christophe de Bezenac in a nook of the CUBE gallery on the opening night reception. The general hubbub of dozens of people socializing and networking and the unfriendly acoustics of the confined space rendered the electronic/acoustic music something of a sonic disaster—hardly conducive to background music, if that was ever the intention. The performance of guitar duo Haftor Medboe and Alanda Williams was held in the foyer of the conference center and the large, high-ceilinged space was a perfectly suitable setting for acoustic renditions of jazz standards. It was possible to enjoy the duo's impressive interplay at close quarters but also as background music whilst engaging in conversation. The more formal setting of the main conference hall with its sophisticated sound and lighting systems promoted exactly the kind of quiet concentration conducive to full appreciation of the subtleties in the play of improvising trio of Bourne, drummer Steve Davis and bassist Dave Kane. 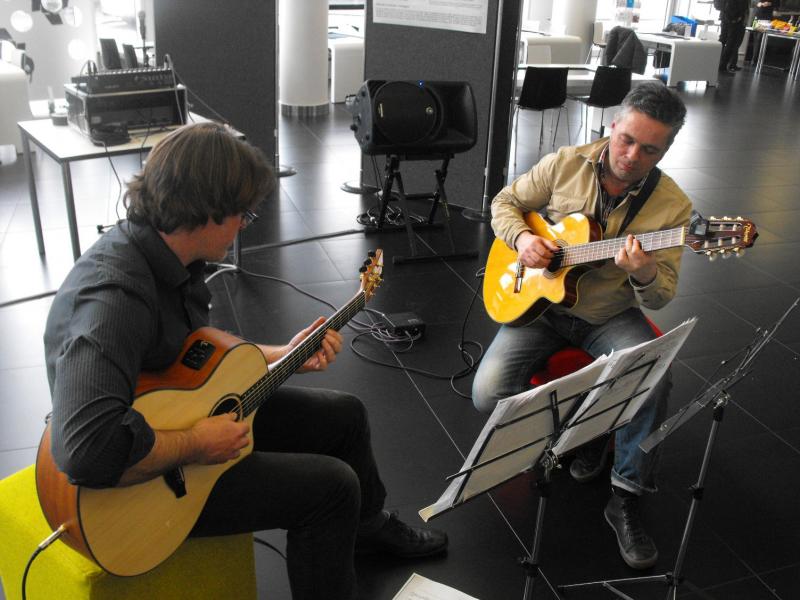 Jazz spaces are often mythologized as "the place to have been" or "the place to be seen"—one need only think of Storyville, Bourbon Street, 52nd Street and how they, and spaces like them, have helped frame jazz's history and mythology. Jostine Loubser from the University of Salford gave a fascinating paper entitled You Are Now In Fairyland: Jazz from District Six, which examined the relationship between space and music in the particular case of District Six, Cape Town, South Africa in the 1970s. As related by Loubser, District Six was a vibrant community of colored residents, black Xhosa residents, Malay immigrants, Muslims, Christians, Afrikaans, whites and Indians. Pianist Abdullah Ibrahim once described District Six as "a city within a city," and interestingly, Loubser questioned Ibrahim's perceived role as a pioneer of South African jazz, citing instead guitarist/singer Cliffie Moses as one of the pioneers of the Cape Town sound, which was influenced by carnival music. For Loubser, District Six was comparable to Storyville, New Orleans, and a place where human activities and music intertwined successfully, with music and dance as the glue in the integration of the people.

Loubser described how the apartheid government systematically removed District Six's 60,000 inhabitants in accordance with its policy of racial segregation, almost entirely leveling the neighborhood in little more than a decade. The racial integration of District Six was cause for celebration, and in fact the neighborhood has been immortalized in film, poetry and song. In terms of significant worldwide migration, waves of refugees fleeing conflict, and an exodus from the countryside to the cities, Loubser's paper served as a timely reminder of the possibilities of integrated communities and music's role in fostering and cementing integration.

The question of a Cape Town jazz sound, as alluded to by Loubser, was examined in a paper entitled New Ways of Being South African: Canon Formation in South African Jazz and Elsewhere, by Marc Duby of the University of South Africa. Duby drew attention to the existence of the Cape Jazz Real Book, though he admitted that trying to define South African Jazz, "is like walking a tightrope between essentialism and nostalgia." Authenticity and essentialism were recurring themes throughout a number of papers and one of the more illuminating ones was You Ain't Gonna Hear Me 'Cause You Think You Hear Me: South African Jazz's Struggle Against European Cliché, by Jonathan Eato of the University of York. Taking the South African group the Blue Notes as his starting point, Eato assessed the influence of the group in Europe and the subsequent splinter groups, notably pianist Chris McGregor's Brotherhood of Breath, but the central tenet of his paper was the nature, or rather the perceived nature—of these South African exiles' music that has influenced more than one generation of European jazz musician.

European critics typically referred to a perceived South African sonic cultural identity, using non-specific terms like "township," to cite one example, to describe the music's rhythms. Referring to Tony Herrington's review of the Brotherhood of Breath's Country Cooking (Virgin, 1988) in The Wire magazine, Eato highlighted the reviewer's negativity to the music in suggesting that McGregor had abandoned the "radical, cross-cultural hybrid" of his earlier albums in favor of a mainstream European sound. Eato pointed out that McGregor himself regarded Country Cooking as his most successful South African recording and the presenter went on to question the qualifications of European reviewers to decide what does or doesn't sound South African.