Home » Jazz Articles » Newport Jazz Festival As Strong As Ever

Newport Jazz Festival As Strong As Ever

It may seem like a small thing, but it's nice that the jazz festival in Rhode Island last weekend, August 6-8, was called the CareFusion NewportJazz Festival. No matter how you slice that, it's the Newport Jazz Festival, in the lineage of the event George Wein put together 56 years ago. And it's still running strong. Very strong.

It's a nice thing to see because Wein sold his company a few years back and lost the Newport Jazz Festival name in the process. The company was inept and the festival was headed to the graveyard in 2009 when Wein, then 83, jumped back in and resuscitated it. The formal name—even though everyone calls it the Newport Jazz Festival—was George Wein's CareFusion Jazz Festival 55. It was a terrific rebirth and the name seems a small matter. But a rose by any other name...

So it's nice to see Newport back in the name. CareFusion, a health group that works to improve patient care through its technologies, was a godsend to Wein by providing major financial support, so no problem with them getting part of the name. But George Wein is part of Newport and so is jazz, thanks to his tireless years of work. In fact, on Sunday, Newport Mayor Jeanne-Marie Napolitano brought Wein out to the main stage to proclaim it George Wein Day in the city. She said Wein provided "more joy and sunshine to the citizens and visitors of Newport than anyone else." Strong words for the leader of a gorgeous tourist town with lots and lots of yachts. And money. And attractions.

There was also the issue of riots in 1960 when Wein booked some rock acts and there were bad feelings between the two sides. Wein left Newport for a time. That's a bygone era and all is well.

If the music is to be the barometer, all is excellent. Wein and his staff did a remarkable job of assembling some of the best talent the art form has to offer. And the three stages presented a wide array of the various colors that are contained under the jazz umbrella. There were older, major stars. Young rising stars. Those in the middle who have established themselves as great artists and stars in their own right.

There was straight ahead blowing and free-form, avant-garde influences. Some music had Latin influences and some Eastern. An incredible array of creativity and different approaches. There were also some of the great jazz orchestras on display. Literally, something for everyone. 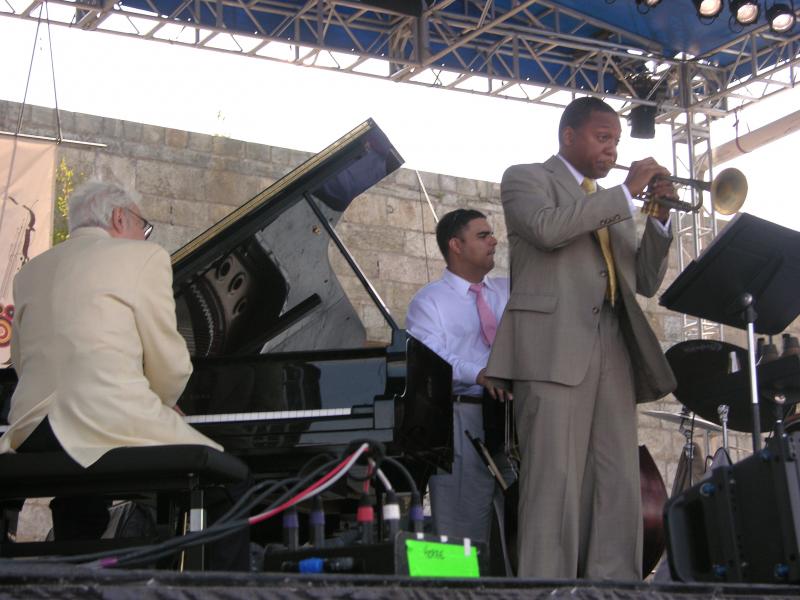 There was even that special "feel good" moment. Last year, it was Dave Brubeck sitting in with Tony Bennett, two octogenarians who hadn't performed together in decades. This year, Brubeck, who turns 90 in December, popped up again. This time with trumpeter Wynton Marsalis, one of the most recognizable names in jazz (as is Brubeck) over the last three decades.

The Marsalis group was ripping through a strong set of swinging jazz when Brubeck came out and took the piano chair. The played "Blues For Newport," then the trumpeter and pianist played a duet of "These Foolish Things." "A Train" closed things out and the crowd was wild in its appreciation. It also featured the band playing "Happy Birthday" for Brubeck, with hundreds of people singing along.

But there were 30 bands presented on Saturday and Sunday and much of it was outstanding. Maybe all of it, but it's impossible to get to everything and get a good listen. So, people pick and choose according to tastes. Some deliberately go to certain stages to hear something new. Be surprised. Maybe enlightened.

One of the strongest sets came from Chick Corea's Freedom Band, a quartet of superior players, with bassist Christian McBride, drummer Roy Haynes and saxophonist Kenny Garrett joining Corea for a fiery set. Corea, of course, is one of the most influential of jazz pianists and he never stops creating. Never coasts. No electronics here. He attacked the piano with fire, but also finesse when called for, and was having a ball, obvious with the looks he gave his band mates as they played off one another. 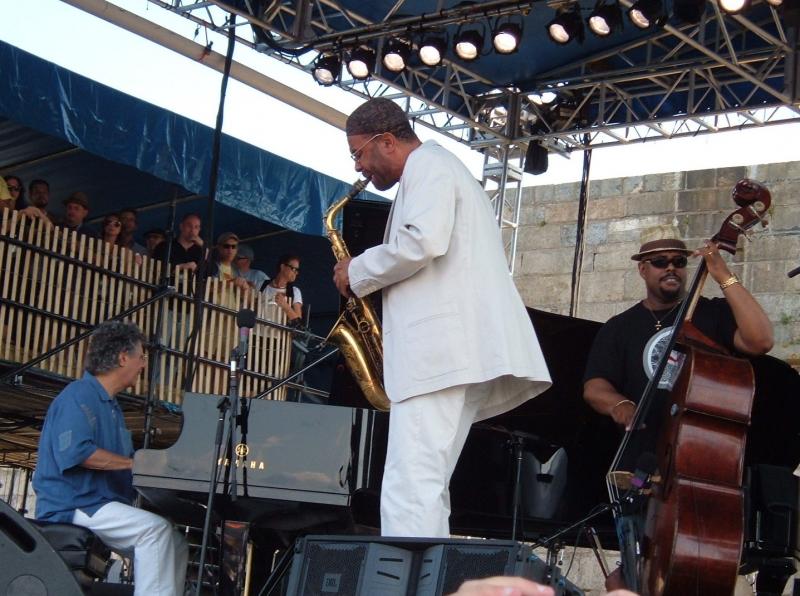 McBride is a stone cold monster on the bass. He's always in control and always musical. Garrett's sax was all over the place, piercing, probing, exciting. Haynes was hip and slick and unpredictable, but right there with what needs to be done. Ageless. Particularly cool was the way they played with "Monk's Dream," in a fresh, imaginative fashion.

Among the other big stars was Herbie Hancock, touring in support of his new disk The Imagine Project,. An all vocal recording with a plea for global unity—the song list includes John Lennon's "Imagine" and Peter Gabriel's "Don't Give Up." But they also performed instrumentals like the jazzy "Actual Proof" and hits like "Watermelon Man."

There's not a lot of virtuoso with Hancock, but his playing is still great, strong, supportive of the music. Lionel Loueke's guitar is an important voice in the band. Hancock doesn't mind being different and the results were quite good. 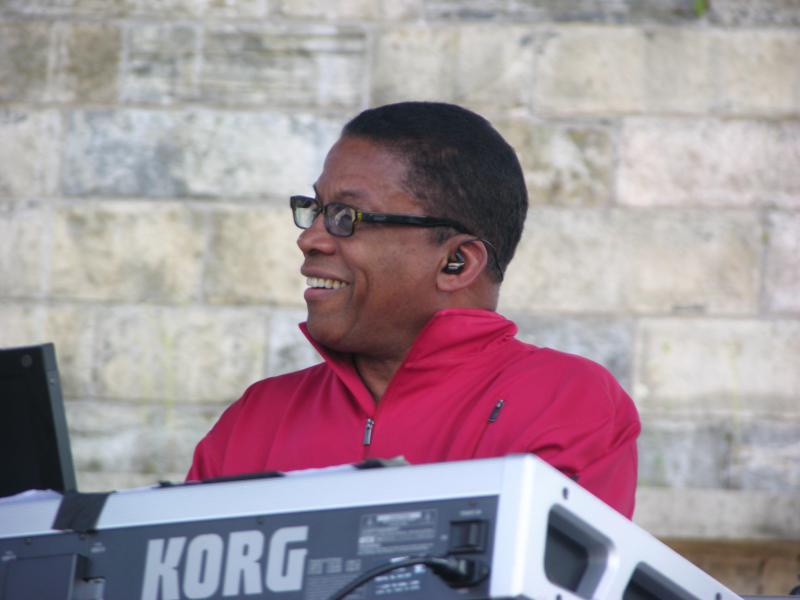 The star power of legendary artists like Ahmad Jamal gave a lot to the festival. Then, when you sprinkle in stellar talents like Maria Schneider, Darcy James Argue, Arturo O'Farrill, Matt Wilson, Jason Moran, Anat Cohen, Julian Lage, and more, and it fans out into a great musical event.

Wein even had his musical moments, bringing back his Newport Allstars, in which he plays piano with a quintet or sextet. This year, he expanded, borrowing players from other groups that were appearing. His astonishing horn section featured Anat Cohen, Harry Allen, Randy Brecker and Randy Sandke. Howard Alden played sweet guitar and Jeff Ballard provided rhythmic support. They had fun, flat out, blowing freely on standards like "Softly As In a Morning Sunrise," and "Maha de Carnival." Their fun extended to the crowd. Allen blew engaging tenor sax at each turn, Cohen was excellent on clarinet, paying twisting, turning, swinging lines with superior dexterity. Her smiles and exuberance throughout the set reflected the atmosphere. And the trumpeters blew like mad, both among the finest technicians on their instrument. Brecker was a particular pleasure, bright, bold and clever.

Speaking of trumpets, walking around that weekend one could encounter an amazing array of people playing that royal instrument. Marsalis is a helluva player whose lines flowed effortlessly and cleanly during his set, driving the music and setting a wild mainstream pace. Jon Faddis continues to astound with technique such that he could blow the bell off the horn. And it's not gymnastics. He's created during those furious statements. Brecker and Sandke were both a pleasure and got plenty of chance to offer inspired solos, especially on "What Is This Thing Called Love." 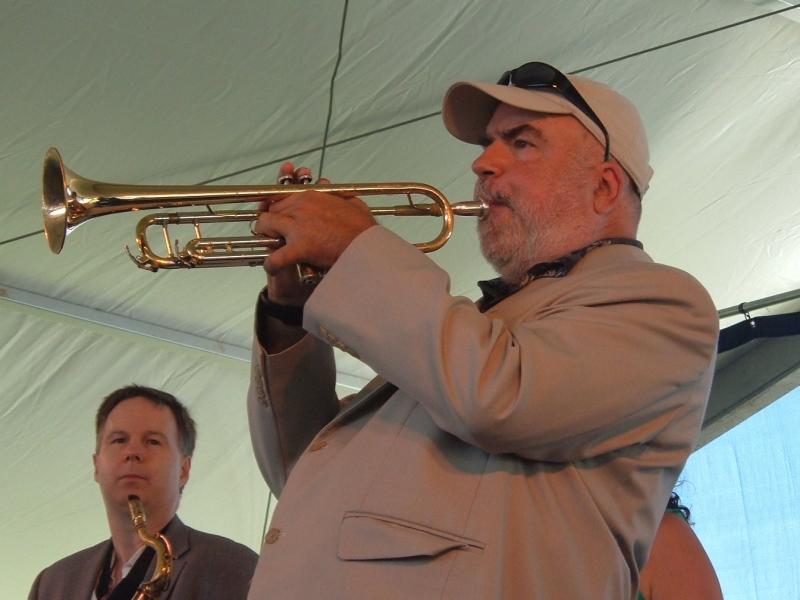 Add to that Ingrid Jensen, who played with both the Maria Schneider Orchestra and Darcy James Argue's Secret Society. She played beautiful, robust melodic lines. Great tone and tells great stories in her improvisations; clean and articulate. Shane Endsley with Ben Allison's group was also a treat; great attack on his horn and making statements that fit sweetly into the spirit of each tune.

Dave Douglas, with his Brass Ecstasy band, showed why he has gained such acclaim over the last decade or so. He's a daring trumpeter, playing great flowing lines; blowing short rhythmic statements that push the music, or squealing and squawking outside the meter on different, exciting jaunts. He's a very strong player who can carry out remarkable, imaginative lines that go on for a long time. And always creative. This band had tuba, French horn, trombone and the music at times had an old-time feel, yet a modern edge. He also paid tribute to trumpeters on most of the tunes: "Rava," for Enrico Rava; "Fats" for Fats Navarro, and "Bowie" for Lester Bowie.

Another nice thing about the festival was the camaraderie among musicians backstage. It was nice to see so many catching up, shaking hands, hugging. At one point there was a gathering of drummer Matt Wilson Kendrick Scott, Nasheet Waits and Rudy Royston. Wilson's band included his wife Felicia on violin. The couple and their four children stayed around for some time, digging the music and fellow musicians. Scott, from Houston—in addition to playing great, as always, sported his cowboy hat while strolling around listening to tunes and chatting with friends.

Brubeck sat for a while in a comfortable armchair in the media tent, then spotting an old friend bellowed "Charlie Bourgeois!" and had a brief chat with the man who was one of Wein's main lieutenants going back to the very beginning of the festival. Brubeck first played there in 1955 and has appeared at more Newport fests than anyone.

There also appears to be a great voice at Newport, in that musicians know they're in a hallowed place. There's a feeling there. They bring their "A" game. And the audience is extremely supportive.

Ultimately, Wein is a special cat and he's made, once again, the Newport Jazz Festival special.