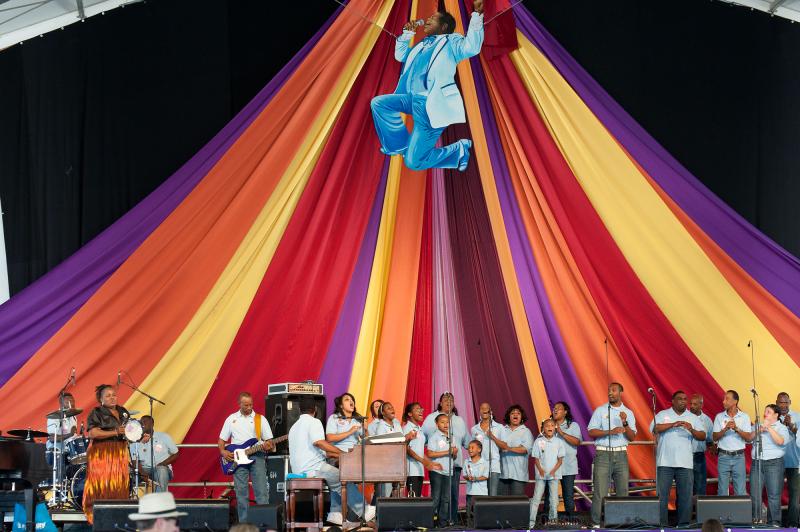 Day 4: Thursday May 5, 2011
Vibraphonist Stefon Harris and Blackout was the featured act in the WWOZ Jazz Tent, but Christian Scott aTunde Adjuah stole the show.

Scott—the young New Orleans-born trumpeter now building a national reputation from his Harlem, NY base—is a hard-bopper, but kicked back on a gorgeous ballad, "Isadora." Then he introduced its namesake, Isadora Mendez, went to one knee on the stage and proposed to the visibly stunned young lady as the beguiled crowd—including many of Scott's relatives and friends —cheered and hundreds of cameras clicked. She accepted.

The trumpeter's real-life experiences inspire his compositions. "Danziger" was a moving musical statement on the post-Katrina tragedy on a bridge by that name—the shooting, by police, of an unarmed civilian. His closer—a commentary on his own encounter with a gun-wielding traffic cop—was the angry "Ku Klux Police Department." Scott was deadly accurate in this piece, firing off round after round of smoking phrases.

Harris supplied more post-bop energy leading his quintet in the closing set. The vibraphonist, pianist Marc Cary and bassist Ben Williams were all in top form. 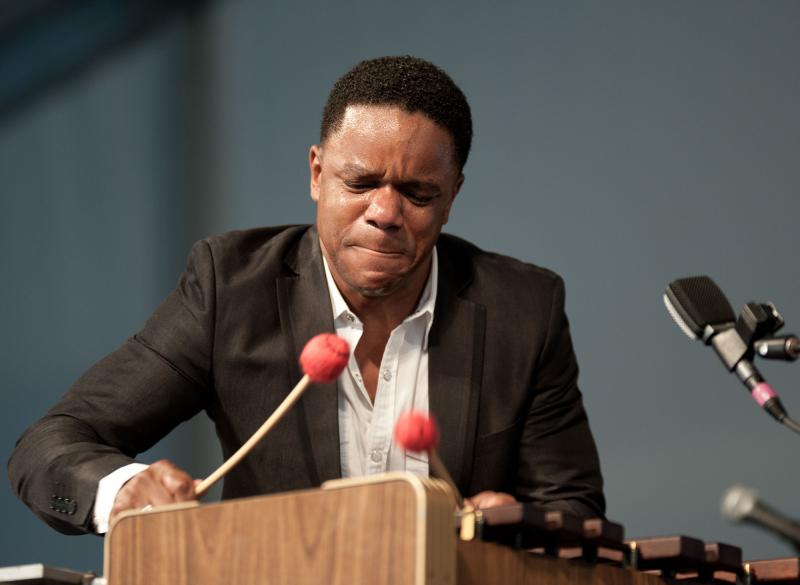 What should have been the day's highlight was sabotaged by inferior sound quality in the Blues Tent. Five present-day New Orleans piano professors took turns paying homage to the late James Booker, whose feats as a rhythm and blues keyboardist and singer from the 1960s through the early '80s are often imitated, but never duplicated. Listeners could catch only glimpses of Booker's genius in this setting; the piano and band efforts came across as alternately tinny or muddy, the lyrics of a couple singers were unintelligible. Only Lillian Boutte's rendition of "Let Them Talk" overcame the sound problems.

Tenor saxophonist Brice Winston offered somber musical reflection on Katrina, noting the storm had forced him to leave the Big Easy after 16 years and relocate to his native Tucson. Winston brought his mentor, trumpeter Terence Blanchard, out for the finale, a high-wire duet on a supercharged "Autumn Leaves."

Making difficult choices is an inescapable part of the jazz festival experience, with music from rock to gospel, jazz to blues to Cajun, blasting from 11 different stages simultaneously in the vast fairgrounds. A friend chose the Mingus Big Band as today's wrap-up set, and said it was terrific. I opted for the Gospel Tent, where Irma Thomas, the beloved "soul queen of New Orleans," sang a tribute to Mahalia Jackson on her Centennial.

Thomas' magnificent voice was ideal for this loving remembrance of gospel's greatest performer. Hits from "Whole World in His Hands" to "Didn't It Rain" rang out, the latter recalling, for me, the time that Mahalia sang it at Newport in 1958, and sure enough, the skies opened up. 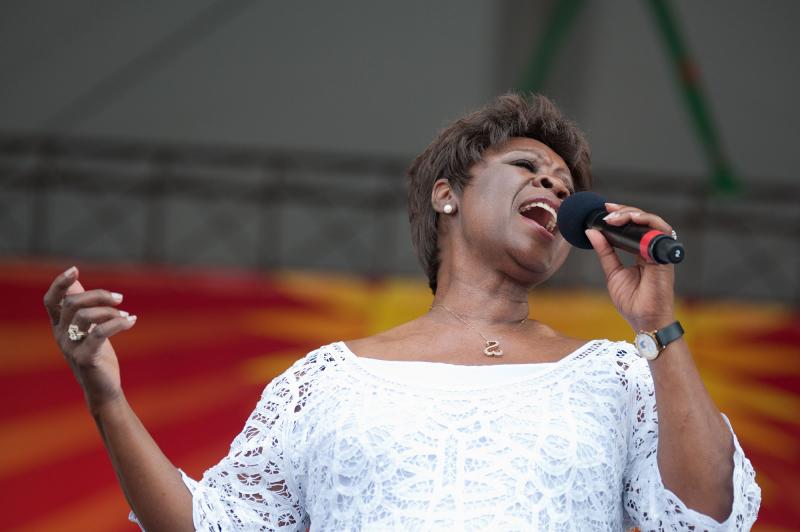 After "Precious Lord, Take My Hand," an emotional Thomas, whose own deep faith was apparent, needed a moment to compose herself. "I laid my mother to rest in March," she explained to the overflow audience, dabbing at tears. Comforted onstage by family members and accompanists, she resumed singing.

The day began with former Flying Neutrinos singer Ingrid Lucia fronting an A-list quintet. Lucia's voice hints at Billie Holiday's, but her repertoire is much more upbeat, as typified by her tribute to Crescent City life, "The Party Don't Ever End."

Lucia, who like most musicians here is skilled in several genres, revived the old Kay Starr hit "Wheel of Fortune" as a slow-drag country ballad, then dug deep into the blues on "I'm With You No Matter What."

Intrigue was in the air for Fleur Debris, a new quartet led by piano innovator David Torkanowsky and starring Zigaboo Modeliste on drums and George Porter Jr. on bass, the latter two making their Jazz Tent debuts after decades with the late, great funk band, The Meters.

Blodie's Jazz Jam, hosted by Jazz Tent programmer Gregory Davis, has become a tradition, and this year's was one of the best.

A showcase mostly for young local talents, this one drew more than a dozen participants for an hour-long blowing session on old warhorses like "Amazing Grace" and "Bourbon Street Parade," 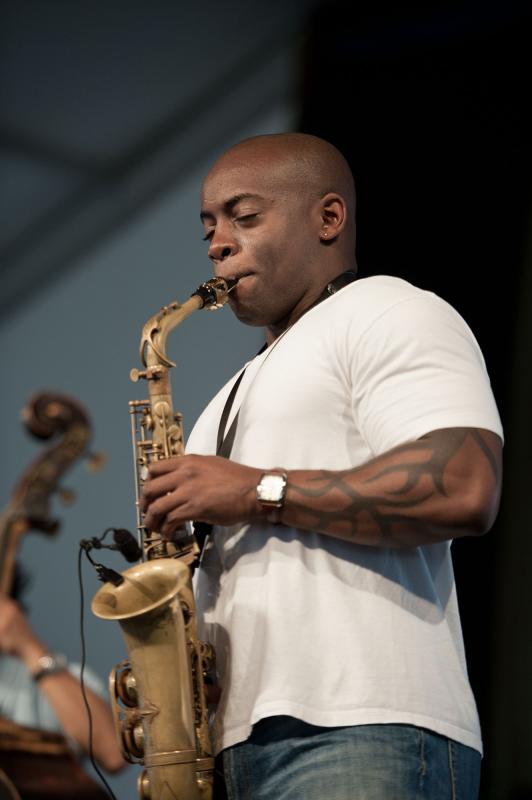 Halfway through the set, Davis, longtime leader of the Dirty Dozen Brass Band, commanded the crowd to get up and dance, and everyone stayed up, some parading around the tent, through a 20-minute "Second Line" on which all onstage had ample time to strut their stuff.

One of those "only in New Orleans" happenings.

Baritone Bliss lived up to its name for those who cherish the sometimes gruff, sometimes tender sound on the baritone sax.

As co-founder of the Dirty Dozen Brass Band, Lewis kept all hands busy on hard-marching charts. Swirling ensemble passages buzzed and growled like a swarm of hip bumblebees. In contrast, "Sophisticated Lady" reclined on a velvet cushion of sound.

The Pfister Sisters have been honing their tribute to the Boswell Sisters—the groundbreaking Big Easy-born singing act of the 1920s and '30s—for more than two decades. Their performance was an entertaining hour of well-arranged old songs like "Heebie Jeebies" and "Sleepy Time Down South" that the Boswells borrowed from one of their heroes, Louis Armstrong.

The Pfisters caught the spirit of the festival with their composition, "Down at the Jazz Fest," an amusing ode to those who wait out the long winter up north, sustained by the knowledge their annual pilgrimage Down Yonder is approaching.

James Andrews' Crescent City All-Stars sounded good in a midweek record store appearance, but not so in its Blues Tent gig. The band members are actually mostly New Yorkers, led by the boisterous local trumpeter, and the music was mostly bar-band, heavy on drums and electric bass. Andrews did cover his grandfather Jesse Hill's R&B hit "Ooh Pooh Pa Doo," but little else smacked of New Orleans.

The opening act in the Jazz Tent was the Juilliard Jazz Ensemble, a quartet of students from the Big Apple music school led by effervescent New Orleans pianist Jon Batiste. They've been paying attention in history class, serving up polished and engaging versions of tunes by Ellington, Monk and Jelly Roll Morton. 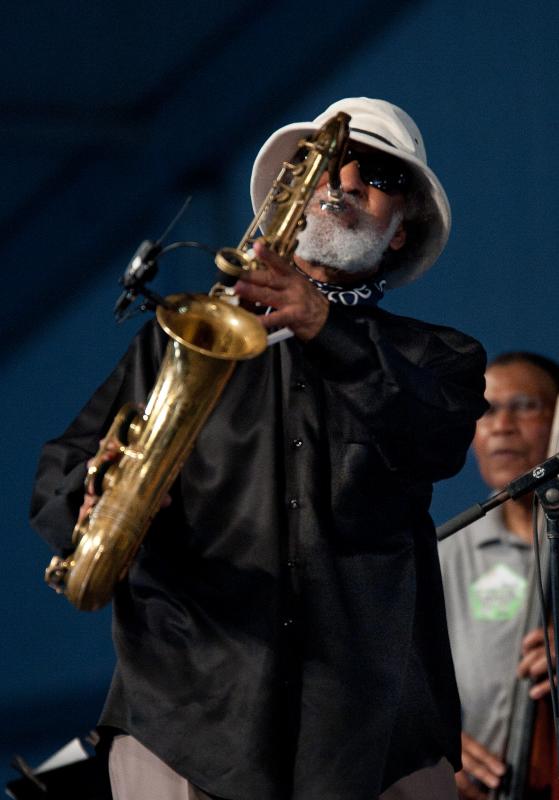 The final day of Jazz Fest is always a bittersweet experience: For many fans, it's the last they'll see and hear of New Orleans for a whole year.

This Sunday—Mother's Day—was more on the sweet side, thanks to a splendid lineup in the WWOZ Jazz Tent.

The final performer, Sonny Rollins, received a hero's welcome from the jam-packed crowd, and the legendary saxophonist earned it, blowing nearly nonstop for 90 inspired minutes.

Rollins' penchant for the sunny music of Africa and the Caribbean is well-known, and he closed with his hit "St. Thomas." An earlier unidentified melody was even more radiant, with the octogenarian shambling about the stage in a joyous dance, and fist-pumping to accentuate the punch line after a particularly bracing run of brawny notes.

When it was over, the crowd stood and roared for several minutes, and Rollins raised his arms in triumph, a champion indeed.

The band took "A Train" for a ride, then resurrected charts from as far back as the 1950s, arranged by the late Clyde Kerr Sr.—a bandleader here years ago—including his gorgeous ballad "Daybreak." Trumpeter Mayfield then plugged his new combination book and CD, Love Letter to New Orleans (Basin Street Records, 2011), and played a moving excerpt, "May They Rest in Peace"—a eulogy for all those who perished in Katrina, including Mayfield's father. 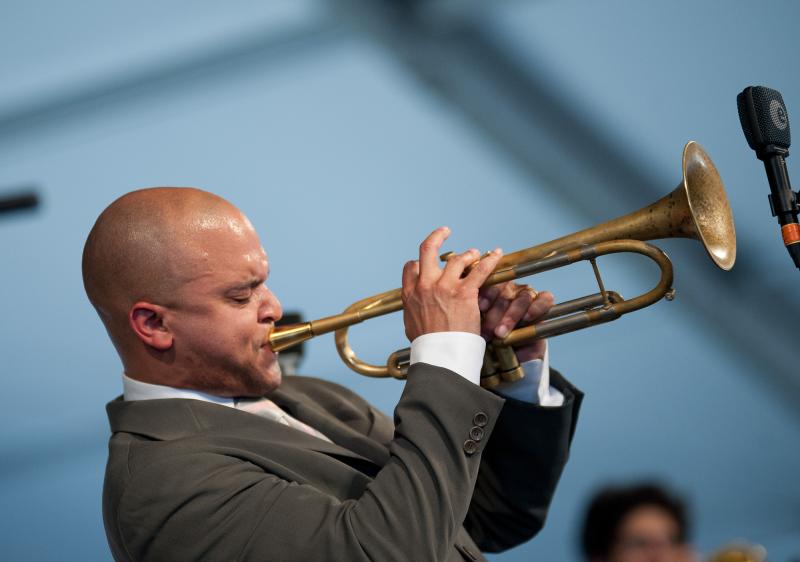 Pianist and musical dynasty founder Ellis Marsalis is always a highlight. During his set, he turned the spotlight on his younger sidemen—including son Jason on vibes and tenor saxophonist Derek Douget—for several jazz standards. Impressive singer Johnaye Kendrick made her third appearance in the Jazz Tent; it was, indeed, her "Shining Hour."

A memorial concert for longtime local trumpeter and educator Clyde Kerr Jr. was organized by his "best friend" and Improvisional Artists Quintet collaborator, saxophonist Kidd Jordan. Jordan opened the hour with a customary avant-garde rant, but then a frontline of nine horn players, tutored by Kerr over the years, took the tribute down a more traditional path. The opening dirge saw each player—including Jordan's sons Marlon and Kent, and local trombone stars Troy Andrews and Big Sam Williams—make his or her own mournful statement.

Then it was jam time—a foot-stomping blues with novel harmonic twists that rose to fever pitch—as did the delighted audience.