Born into a family of street musicians, Ingrid Lucia sang in her family band, the Flying Neutrinos, from the age of eight, so she has music coursing deep in her soul. This sassy New Orleans native has a voice that's prompted thousands of comparisons to Billie Holiday. But despite her stylistic similarities to Lady Day, Lucia's delivery is upbeat, fun and just a bit naughty, in the true Big Easy tradition.

Ingrid Lucia grew up in a gypsy-style traveling family band, living in buses, boats and tents for the first eighteen years of her life. She started out as a dancer, but by the age of 8 she was singing in the band.

That band was the Flying Neutrinos. At first the family travelled and played through Mexico, but eventually they returned to their New Orleans roots. When she was 18, Lucia and her cousin, Todd Londagin, took over the Neutrinos and took the group from the streets of New Orleans to the clubs and concert halls of New York City where they played with everyone up to and including Tony Bennett.

They soon had their first CD, I'd Rather Be in New Orleans, featuring the great Doc Cheathan. Three additional highly acclaimed CDs have followed.

Describing that first CD, the Washington Post said, "There are times when Ingrid Lucia and the Flying Neutrinos' album I'd Rather Be in New Orleans is enticing enough to make even a staunch New Yorker feel homesick for the Big Easy. A sultry, behind-the-beat voice, a combination of sometimes languid, sometimes syncopated rhythms, and lots of evocative brass all conspire to make this a picture postcard of an album." 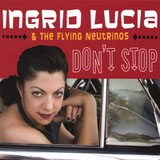 All About Jazz musician pages are maintained by musicians, publicists and trusted members like you. Interested? Tell us why you would like to improve the Ingrid Lucia musician page.