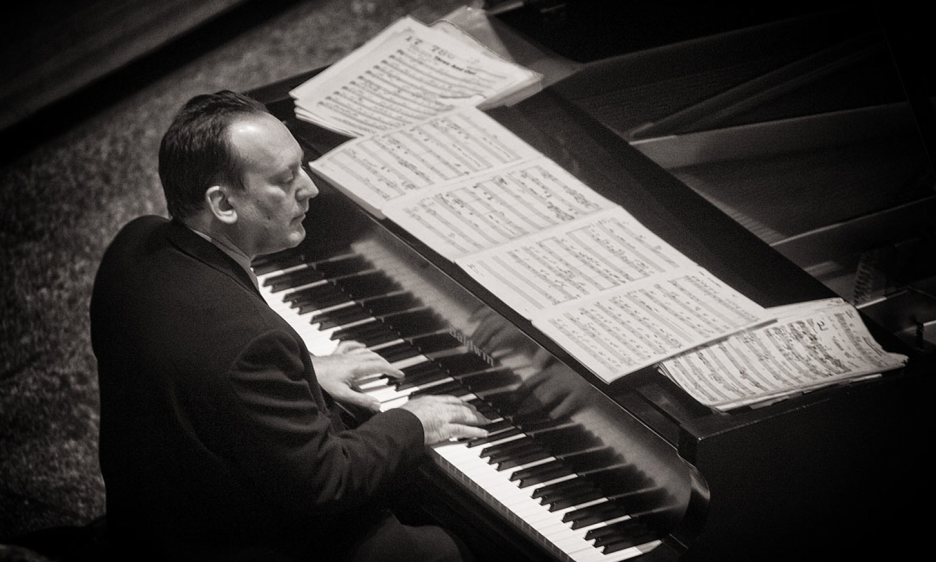 By LUKE SEABRIGHT
December 17, 2019
Sign in to view read count
Bebop is a complex craft, and like all crafts the only way to get any good at it is by learning from those who mastered it before you. Jamming through the night, getting on to that bandstand and firing away your best improvised lines, jousting with your partners (be they friends or strangers) like in the cutting contests of old. This is all part of the studious process that jazz musicians all over the world work their way to hone their musical expression. Michael Weiss is considered one of the finest straight-ahead jazz pianists on the New York scene, and it comes as no surprise that he learnt from the best, chief among them the great Johnny Griffin, whom he accompanied for over 15 years. All About Jazz had the opportunity to catch up with him after a rehearsal for his gig with Nat Steele's Quintet as part of the London Jazz Festival.

"I arrived in London yesterday. I was just in Italy for a week. I'm doing three performances here at Toulouse Lautrec, a workshop, a masterclass at Trinity Laban, and then Ronnie Scott's for the last night. I'm playing with Nat Steele's quintet on Saturday afternoon. In the evening I play with Steve Fishwick's nonet, playing the music from McCoy Tyner's recording Tender Moments. And tomorrow night I'm here with my trio—Adam King on bass and Mark Taylor on drums. Mark plays in my trio in New York so he knows all my music. This is all part of the Bopfest jazz festival."

Bopfest is listed as part of the EFG London Jazz Festival but is in fact a separate entity. Nat is packing up his vibraphone when he overhears the question. Seeing as he is one of the founders, he knows all the details. "BopFest is a sort of parallel event. It's run by musicians who play straight ahead jazz. That's me and a saxophonist called Allison Neil who plays West Coast style jazz." They're known as Neil and Steele, points out Michael.

"It started in 2015 and initially was a very small thing with people we knew. It was sort of an alternative to the LJF which we find doesn't have much actual jazz, which is a shame because there's a good scene here in London and great musicians who play in that tradition. They'll be sat at home for a week during the London Jazz Festival. It was a challenge at first but after putting our case to LJF that there could be more 'real' jazz on their program, we are now listed as part of the event. It's gradually gotten bigger and bigger every year. And last year was the first time we started bringing some guest soloists over from abroad. That was a tenor saxophonist called Grant Stewart. And this year it's Michael. It's going great so far. "

Michael agrees that it's promising. The pair has never played together before, but they share an affinity for the standards that shape every jazz musician's repertoire. "It's our first time playing together this afternoon, but we're very compatible. As a touring musician, it's not uncommon to perform with people you've only met the same day. When I was in Bologna last week, I played with a bassist and a drummer that I'd never performed with before. You email the music in advance, have a little run-through and that's all you need."

With the exception of drummer Mark Taylor, Michael hasn't played with any of these musicians before. Then again, he's not often in London. The last time he was there was over 20 years ago, when he was part of the reunion tour for one of bebop's most iconic units. "It's been a long time. The last time I was here was in 1995 with the Jazztet. We played a concert at the Jazz Cafe, in Camden Town. Before that it was 1981. I've been excited to come back here. Hopefully the next time I'll have some time to walk around a bit." At the sound of that, Nat's ears once again perk up, and he can't help but ask who was part of the Jazztet back in the day. "It was Art Farmer, Curtis Fuller and Benny Golson in the front line. The rhythm section was me, Buster Williams and Carl Allen. It was a summer tour for the band all over Europe. We were out for two weeks." They played London, as well as festivals in Vienna, Copenhagen, The Hague, Paris and Belgrade. Then back to New York, where Michael still lives today.

"I'm still based in New York. I'm there most of the time, but things out of town pop up occasionally. I'm going to Chicago and Texas in April. Every once in a while stuff comes along. It's not as before. Touring with Johnny Griffin or Art Farmer, we'd be out of town for a stretch. There were clubs that would book 5 to 6 nights a week. In Seattle, Los Angeles, Chicago... That doesn't happen anymore. Most of my gigs in New York are with my trio, but I'll augment it once in a while to a quartet, or I might resurrect my sextet. This year and last year I did a tribute to Griff, playing his repertoire with a quartet in Chicago (where he was from) and New York. Eric Alexander was on saxophone. Johnny would have been 90 last year, so it was a birthday tribute. We tried to do something in Europe with that but couldn't get any bites. Maybe we'll do that again next year."

Johnny Griffin played a very significant part in Michael's career, and he enjoys revisiting his music. "That tribute was a special event, but sometimes I'll play a tune of his on my own gigs. Griff was a good composer." He can't quite remember however when it was that they met. "I do remember the first gig I played with him. It was in Boston. I had a terrible flu and he plied me with Cognac to keep me going!" Did it help? "I think so. It was exhilarating."

"Johnny was ebullient and fun-loving. He had a great personality. I got to know him very well. I started subbing in 1985 and joined the band in 1987. We toured every year until around 2001 when he had a stroke. He slowed down after that, and didn't come over to the United States so much. I visited him several times in France. He was living near Poitiers in a big manoir named Chateau Bellevue. It was a gigantic house in the middle of nowhere. Every spring we would be out anywhere between 4 and 6 weeks in the US, and we'd also go to Japan or Brazil.

"I made four recordings with Griff including one in Paris in 2000 with Steve Grossman, Pierre Michelot and Alvin Queen." The album, which came out a few years after Michael's second solo album, Power Station, features the latter's eponymous original composition. Between Power Station and his first album, Presenting Michael Weiss, Weiss was busy playing with Art Farmer's groups, the Jazztet, Jimmy Heath, Lou Donaldson... "I worked with Charles McPherson, Frank Wess, the Vanguard Jazz Orchestra... All those things were happening at the same time."

The Village Vanguard, a legendary venue that any aspiring jazz musician hopes to play in someday, has since become one his most played spots. "It was the Thad Jones/Mel Lewis big band originally. They changed their name after Mel passed, but it's the same book of music. I first started playing with the band when Mel was there and continued regularly over a period of about 25 years. Officially I was a sub even though I played a majority of the gigs. Adding in all the various small group engagements—with Griffin, Charles McPherson, Slide Hampton, Jimmy Heath, George Coleman, Lou Donaldson, Joe Wilder, Von Freeman, and my own bands, I calculated I played the Vanguard over 700 times. I made a gigography going back to 1982, where I list place, date and personnel."

When he's not playing with his trio, Michael might be a guest soloist with a band out of town, or contribute to other projects in New York. Recently, he's been playing again with another of his old mentors. Of the many great musicians who've shaped Michael's career, some of the most influential appear to have been saxophonists. "George Coleman is doing incredibly well. He's 84 but he's playing tremendously. The first time I performed with George was in 1987, and then we played trio at Bradley's with Bob Cranshaw. We just had a week's engagement at a club called Smoke last month. We'll be back again in December and March."

An accompanist grows from playing alongside great leaders and learns from having to adapt to their different musical personalities. Coleman to this day is someone who appreciates an accompanist who throws in their own ideas. "He's one of those soloists who welcomes a lot of input. The opposite was someone like a Johnny Griffin who needed to follow his own path with minimal distraction. George is more interactive and welcoming of sharing the harmonic landscape. He's probably one of the most demanding people to play with because he has a huge repertoire and you never know what he's going to play, or what key he's going to play in. So you may be playing a song you've never played before or heard of, also in a key you might not expect. There's no rehearsal so you need to be sharp and focused at all times. Playing with George is like going out into the middle of the ocean, being tossed off the boat and told 'we'll meet you on the shore!' It's very demanding, but equally stimulating and challenging."

On top of playing with Coleman, there are a few other things in the pipeline, including some recording sessions next year. "I might be recording next spring, a quartet date. I'm still working out the details of that. And hopefully a trio date after that, because I've got a lot of new material that I've been playing for some time. What's good about having material in your repertoire for a while before you record it, is that it gives you time to refine it, build on it, flesh it out, develop the detail naturally through gigs. Sometimes you end up composing songs for the recording which you've never played before. Then the record comes out, and then you learn it! This is the opposite. And we play the repertoire as a unit, so we've developed a feeling for it organically. We can basically go in the studio and hit it. Even some older things I've done, I've changed around and added sections."