By John Kelman
January 8, 2015
Sign in to view read count 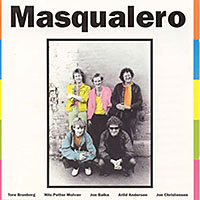 Despite plenty of evidence to the contrary, there are still those who think that Norwegian musicians can't play "real jazz" (whatever that is), and that what they do play is something consistently (and erroneously) categorized as "Nordic Cool." Submitted for your approval is today's Rediscovery: the self-titled debut from Masqualero, a group that would retrospectively become known as a Norwegian supergroup and one that demonstrates there's plenty of "real jazz" going on in this country of five million, with a disproportionate number of significant artists going on to garner international acclaim. What group, after all, would name itself after a composition by American saxophonist Wayne Shorter—a composition that appears as the only non-original on Masqualero—and not be somehow affiliated with the jazz tradition?

Two of Masqualero's members—its cofounders—were already internationally known names. Double bassist Arild Andersen first appeared on Munich's lauded ECM label with Jan Garbarek on the saxophonist's early classic Afric Pepperbird (1970), moving on to record a number of albums for the label under his own name (three of them released between 1975 and '78 and collected by the label in the 2010 box set Green Into Blue-Early Quartets). Drummer Jon Christensen, after also appearing on Afric Pepperbird, went on to become the label's de facto house drummer for the next decade or so, appearing on subsequent albums by artists ranging from Garbarek, Ralph Towner and Eberhard Weber to Bobo Stenson, Miroslav Vitous and Keith Jarrett.

Both continue to record for the label to this day. Andersen's last album was the superb Mira (2014), with his longstanding trio featuring saxophonist Tommy Smith and irrepressible drummer Paolo Vinaccia; he remains a bassist who, despite possessing a muscular tone and frightening dexterity, is capable of deeper lyricism and an ability to make his instrument truly sing. Christensen—heard most recently on the overdue first-time CD issue of bassist Miroslav Vitous' Miroslav Vitous Group (1981)—is a drummer whose earlier power has been diminished somewhat by physical impairments, but who these days remains a creative player of a more textural bent. Still, 30 years on, their collaborative work in Masqualero remains some of their absolute best.

The balance of Masqualero's five members were relative youngsters.already showing substantial promise and who would subsequently go on to become well-known leaders and, in some cases, international stars. Trumpeter Nils Petter Molvaer was just 23 when Masqualero was released, and while playing here with a more burnished tone and unmistakable jazz sensibility, he would go on to become a world-famous fuser of improvisation, electronica, world music and more on albums like