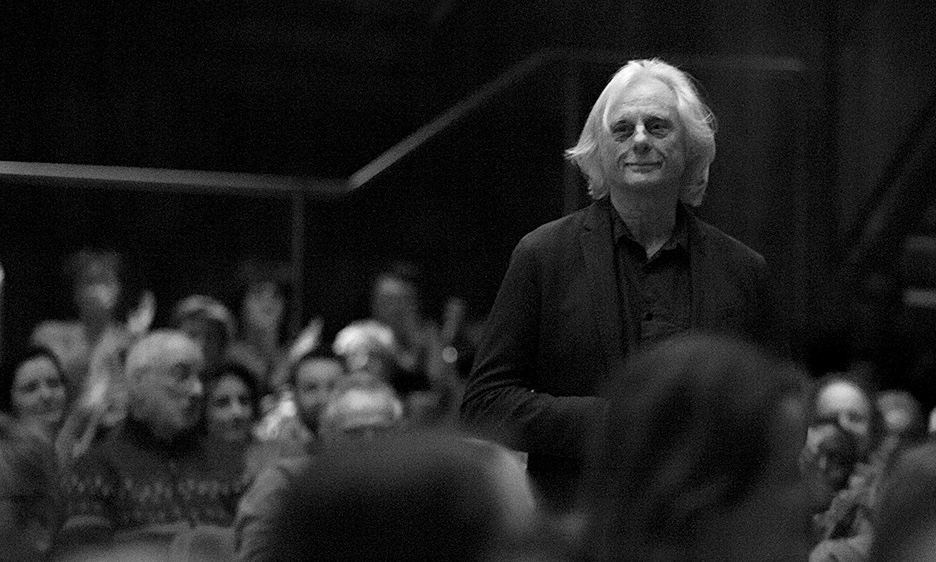 By MARIO CALVITTI
January 12, 2020
Sign in to view read count

It clearly emerges how the main function of Manfred Eicher was that of a catalyst, making sure that the music happened and materialized according to his intuitions and his idea of sound quality, or simply by connecting artists with different backgrounds for projects that would hardly have found a spontaneous realization.

This article first appeared at italia.allaboutjazz.com.

During the year marking the 50th anniversary of the foundation of the German record company ECM, there have been numerous music festivals in Europe and America dedicated to the official celebration of the event. One of the most important was certainly the one held at the end of November in Brussels, which saw the participation of numerous artists connected to the label who performed over four days in 12 concerts at the cultural center of Flagey. The building that hosted the festival was once the seat of the National Broadcasting Institute, and since 1998 its rooms have been dedicated to musical performances of various kinds and auteur film festivals.

In addition to the concerts, the spaces of the center also hosted a photographic exhibition dedicated to the cover art of ECM recordings (including a wall entirely covered with CD sleeves of almost the entire catalog) and a listening room where it was possible to listen to the testimonies of some of the main artists who contributed to the history of the label, taken from interviews conducted by Patrick Bivort, a Belgian journalist and radio host who during the festival also held a conference on the 50 years of the ECM and its importance for the world of music.

To top it all off, a film review of films somehow related to ECM, either directly as the documentary Sounds and Silence or the films of Angelopoulos and Tavernier with music composed by artists of the label, or indirectly like the films of the Soviet director Andrei Tarkovsky who provided the inspiration for various musical projects published by the label. But the real highlight of the already rich festival was the presence of Manfred Eicher, the founder of ECM, for the entire duration of the event, and protagonist of a meeting-conference with the public during the final day.

This has meant the festival became, in all respects, a celebration of Eicher's role in the creation and subsequent management of the record label. The producer is not simply the man behind ECM: he is ECM, in a total identification with the label which in fact is a pure extension and materialization of the musical sensitivity, creative vision and ideas of its founder, one of the most important men in the music world of the last 50 years.

The entry and subsequent rapid affirmation of ECM in the recording world has caused a revolution both in the relationship between the artists and the music industry and in the way in which the work of art is presented to the public. The sound quality is put in the foreground, but also the graphic design of the album is taken care of in the smallest details through a minimal but extremely refined design, which quickly became a model destined to make school and generate numerous imitations. The commercial result remains a marginal detail to the project, never sought after as such, but accepted as a self-financing means for the necessary sustenance of the label.

In the ECM catalog, music has no boundaries of any kind, neither geographical nor temporal. Musicians from all places and at all times coexist without distinction of styles, sometimes within the same album, in a universal vision of music that is an expression of that of Eicher, the main architect of many experiments that appear risky on paper, but ultimately proved themselves almost always successful, such as the idea of combining a vocal quartet specialized in the execution of ancient music with a fifth instrumental and improvised voice like Jan Garbarek's saxophone, giving life to the Officium album which has become one of the best-sellers of the catalog.

Listening to the testimonies of the musicians and other colleagues close to him, it clearly emerges how the main function of Manfred Eicher was that of a catalyst, ensuring the music happened and materialized according to his intuitions and his idea of sound quality, or simply by connecting artists with different backgrounds for projects that would hardly have found a spontaneous realization. His presence in the studio was often enough to solve problematic situations for musicians or technicians. His close relationship with artists and sound engineers, based on almost total mutual trust, has led to the creation of one of the largest and richest album catalogs in the world, characterized by a very high sound quality and a precise aesthetic, which has become an essential point of reference for anyone involved in the music industry today. All this by following the only business idea of presenting music in the best possible way, without worrying too much about the economic return. Who else could have even thought of releasing a 10 LP live piano solo box set?

For everything he has accomplished, Manfred Eicher widely deserves all the countless praise he received over the four days in the Belgian capital, not only from the performing musicians for having enabled them to carry out their works in the best possible conditions, but also by those who met him in the theater foyer, simple fans (including this writer) who wanted to express their gratitude for the splendid music made available to the public during the label's existence.

The climax took place at the end of the meeting-conference held on Sunday 24, a round table with some of the musicians present at the festival (Avishai Cohen - Trumpet, Anja Lechner, Louis Sclavis and Nik Bärtsch) and moderated by the conductor Patrick Bivort. The chosen date bears a particular meaning, as on November 24, 1969 the first ECM recording session took place which gave birth to Mal Waldron's album Free at Last (recently reissued in an extended celebratory edition on double vinyl). And the pianist himself has a close relationship with Brussels, having lived the last years of his life in the city where he passed away in December 2002. The meeting took place as a chat among friends, with the moderator who solicited anecdotes and memories by the producer and the musicians about their relationship with ECM, before ending with a short question and answer session with the public. At the end, a standing ovation from all those present greeted Eicher, visibly moved by the welcome given to him.

The concerts began on the evening of the 21st, with the performance by Anouar Brahem's Souvenance with the Royal Wallonia Chamber Orchestra conducted by Frank Braley. The Tunisian oud player released his first album on ECM in 1991, followed by nine other titles. Souvenance is a work dating back to 2014, and which has a particular meaning for the composer, influenced by the events of the Arab spring of those years. In all his works, Brahem tends to a musical encounter between the Arab and western world, and Souvenance represents one of his best compositional outcomes, with a string orchestra to support the veined music of poignant melancholy performed by the quartet completed by Francois Couturier's piano, Klaus Gesing's clarinet and Bjorn Meyer's electric bass.

The following day saw the unprecedented duo of Anna Gourari's piano and Reto Bieri's clarinet open the concerts at lunchtime, in the smaller room dedicated to chamber music. The two appeared for just their second concert together, each of them having already recorded some albums for ECM individually. The program ranged between classical and contemporary, with opening and closing in duo and solo performances in between; a joint project is in progress and is expected to be published over the next year.

The first concert of the evening was Enrico Rava Special Edition, an all-Italian formation with Giovanni Guidi on piano, Gianluca Petrella on trombone, Francesco Diodati on guitar, Gabriele Evangelista on double bass and Enrico Morello on drums. The trumpeter, who turned 80 this year, has shown that he still has a lot of energy and desire to play, supported by a group of brilliant musicians. The music developed for about an hour in an almost uninterrupted flow, with themes and musical ideas that followed one another by varying the tempo and letting the musicians interact in various ways and combinations, stimulating their interaction in an excellent example of modern jazz but firmly anchored to the mainstream.

Up next was Albanian singer Elina Duni, who impressively opened with her voice coming from the back of the room as the artist reached the stage by walking across the audience on one side of the hall while continuing to sing. Her splendid voice, pure and intense, was the absolute protagonist of the following hour, accompanied by guitar, piano or tambourine. Duni performed songs from her album Partir, adding the connecting texts between songs introducing the general themes of travel and distance. The lyrics were sung in various languages, from Portuguese to French, from Kosovar to Italian (a song by Domenico Modugno, "Amara terra mia"), and also Arabic, German, Albanian. The concert was exciting, thanks to a wonderful and highly expressive voice, capable of conveying feelings and emotions through sound.

To conclude the evening, Avishai Cohen's new project, Big Vicious, hit the stage. The Israeli trumpeter (not to be confused with the double bassist of the same name) presented himself at the head of a formation with two guitars and two drums. Energy was palpable, but remained controlled and not as disruptive as one might expect. Especially interesting was the contrast between the decidedly rocking rhythmic base and the leader's trumpet with its warm and soft sound. Enthralling rhythms and endearing melodies are the main ingredients of the group's music, which should see the light on CD next spring.

The third day was the richest in concerts: six, starting from 4:00pm until almost midnight, with the groups alternating between the two concert halls. The first to perform in the small room was Larry Grenadier in a double bass solo concert, presenting tracks from his recently released The Gleaners, including a tribute to Oscar Pettiford. The double bassist has shown excellent technique with the bow, and with uncommon musical sensitivity that allowed him to sustain an hour of solitary performance while always holding the audience's interest, who definitely showed their appreciation.