Amanda Addleman: Into the Light

By JEROME WILSON
January 12, 2020
Sign in to view read count 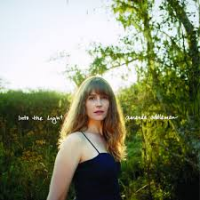 There are a lot of young singers around whose music draws equally from the fluidity of jazz and the confessional focus of the singer-songwriter genre. San Francisco's Amanda Addleman is one of those. This CD mixes personal original songs with standards and she delivers both with a deceptively light but powerful voice and understated passion.

Her voice has a gauzy, high-flying quality that fits perfectly with her languid, easy-flowing music, rhythms built on electric piano and guitar that are redolent of 1970s' fusion. Songs like "Blank Space" and "Electric Feel" have the laid-back sophistication of Steely Dan's songbook but lyrically come from a far more optimistic and positive place.

Addleman's original songs are mostly introspective but are musically diverse. "Almost Gone" has a slow country/gospel stateliness, "Latch" contains a choppy African guitar rhythm within its bouncy groove and "In My Mind" sways with a bluesy wistfulness. On a couple of occasions, she evokes two singer-songwriter icons. Her soaring soprano on "I Wish I Was A Bird" is reminiscent of Joni Mitchell and "When The Lights Are Gone" has a urban grit out of Laura Nyro's realm. "ET" is a lovely song that uses science fiction metaphors to describe the feeling of finding a new love and has Addleman's high voice cutting through its plush, soulful arrangement like a laser. It also features guitarist Lee Dynes running wild in one of the album's few extended instrumental passages. Dynes' tight picking also stands out on the title track, an up-tempo workout for the entire quartet with Addleman doing bubbly scat singing and showing her dexterity on acoustic piano.

The singer does two standards in this set, a lazily swaying jazz-rock version of Irving Berlin's "Blue Skies" that floats along on the rhythmic strength of her voice and electric piano and a treatment of "There Is No Greater Love" notable for the honesty and purity she brings to the lyrics. She sounds as though she means every word of them.

Amanda Addleman's music sounds light and carefree on first hearing but listen carefully and you pick up its underlying feeling of strength and determination. The breezy sound of her music brings the power of her singing into sharp focus. Her work is hauntingly lovely and memorable.

This Is The Thing; Blue Skies; Almost Gone: Latch; In My Mind; Blank Space; I Wish I Was A Bird; Electric Feel; Get Gone; ET; Into The Light; There Is No Greater Love; When The Lights Are Gone; Lullaby.

Title: Into the Light | Year Released: 2020 | Record Label: Self Produced