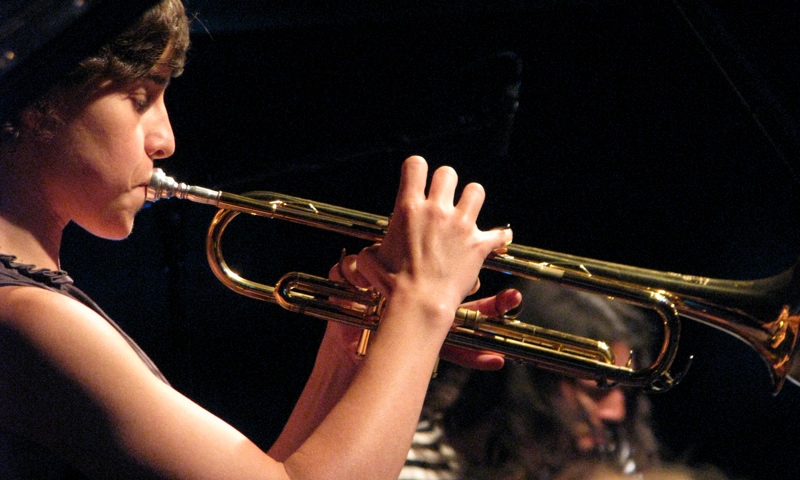 Ljubljana—capital of the Republic of Slovenia, member of EU, neighbored by Austria, Hungary, Croatia and Italy—hosts the oldest jazz festival in Europe, which held its 55th edition this year. The event is usually organized by Cankarjev House—Cankarjev Dom, in Slovenian—a prestigious, state-run cultural centre in midtown Ljubljana, residing in one half of an impressive twin tower building, the other part being the National Bank of Slovenia.

Ljubljana is situated near the Alps in the west and the Adriatic part of the Mediterranean Sea in the south. It is on one hour from Trieste, two hours from Venice, two hours from Zagreb and three hours from Vienna. A city with a high appreciation of the arts, its roughly 300,000 inhabitants have access to eleven theatres, fifteen museums, four professional orchestras and a rich musical history. The first philharmonic in Europe was established there in 1701, with Haydn, Beethoven, Paganini and Brahms as regular guests; and in 1881 Gustav Mahler started his professional career there as a conductor.

The House of Cankar is a state institution, created in the 1980s to foster collaboration between all art disciplines. Ivan Cankar (1876-1918) is held to be the most important writer to shape Slovenian identity: "Cankarjev Dom believes that cultural, artistic and scientific creativity meets the basic condition for attaining spiritual freedom and the richer spiritual lives of people and social development."

Slovenes have undergone different ruling powers and absorbed many influences. They had and have a high esteem for their indigenous language, which has some peculiarities not easily accessible, even for speakers of other Slavonic languages. That esteem resulted in a remarkable curiosity. Despite being a predominantly Roman Catholic country, Lutheran Reformation Day is an official holiday on October 31st of each year because Slovene standard language and Slovene literature were both established by Lutheran protestants: Primož Trubar, who wrote the first books in Slovene; Adam Bohorič, who wrote the first Slovenian grammar book; and Jurij Dalmatin, who translated the whole bible into Slovene.

The concerts of the festival were running in four venues: at three in Cankarjev House (Štih Hall, Linhart Hall and the Klub), along with the big semi-open air venue, Križanke. The jazz festival is part of the city's bigger and longer-running summer music festival. As with the last two years, the festival was again co-curated by Cankarjev's Bogdan Benigar and Pedro Costa, from Lisbon, associated with the well-known Clean Feed record label. That brings a special quality to the festival, its programming and its productions which can only be found in a few other festivals in Europe, like 12 Points and Jazzdor Berlin (some reflections on this can be found on the festival website).

Fifteen groups were performing at the four-day festival: three from Norway, including Jaga Jazzist, In The Country and Cortex; and four from Slovenia, Jani Moder's Brainblender, Tarek Yamani Trio (with a leader from Lebanon), Marko Črnček 4, and Zlatko Kaučič/Agusti Fernández. It also means there were only sequential concerts, with no parallel streams, so it was possible to attend every show. This year's festival had two main coordinates: Norway as regional focus; and an instrumental focus on the piano. Twelve pianists were performing at the festival, from solo to groups with more than five musicians. This year's edition had only one piano-less group in Cortex- -a great exception. The pianists present at the festival, both well known and less known, were veteran Joachim Kuhn, along with Agusti Fernandez, Morten Qvenild, Giovanni Guidi, Chris Abrahams, Marko Crncek, Oystein Moen, Fulco Ottervanger, Gabriel Pinto, Chip Crawford, Tarek Yamani and Pierre Chretien.

The festival started with the opening of an exhibition by longtime festival photographer Nada Žgank at Cankarjev House's gallery. The exposition gave an impressive overview of the great variety of musicians and groups who had performed at the festival in recent years.

Jani Moder's Brain Blender, a Slovenian-Austrian combination led by Slovenian guitarist Moder, functioned as the musical festival opener at the big open air venue, Križanke. The band was comprised of well known Slovenian keyboardist Marko Črnčec, bassist Robert Jukic and Austrian percussionists Klemens Marktl on drums and Flip Philipp on marimba. Moder's music leaned to a more tranquil variant of fusion, often switching to a Pat Metheny-informed style of playing. Moder went into more contemplation modes as well as adopting a more incendiary approach to his solos, especially in the second half of the set. His band mates delivered some nice solos, too. The group finished its set with an Eastern- tinged piece, spinning out its beautiful melody.

The hall was completely filled up when Jaga Jazzist started its concert. Jaga, now in its twentieth year, played for the first time without long time member, Mathias Eick, a well- known trumpeter/multi-instrumentalist who joined the group in 1998. As is often the case with Norwegian groups, he was not immediately replaced by another musician. The current lineup is now: Lars Horntveth (tenor sax, bass clarinet, guitars, keyboards), Øystein Moen (keyboards), Line Horntveth (tuba, percussion, vocal), Erik Johannessen (trombone, percussion), Marcus Forsgren (guitars, effects), Even Ormestad (bass, keyboards), Andreas Mjøs (vibraphone, guitars, drums, electronics), and Martin Horntveth (drums, drum machines). The other eight members, all of them multi-instrumentalists, had to take over and adequately fill in the gap left by Eick. Because of their ability to switch to other instruments during the performance, these musicians were able and still are able, even minus one member, to produce a huge and rich sound with big energy, which immediately brought the hall and the audience to a high degree of vibration. Jaga's musicians proved masters of enchanting, repetitive and rhythmic music. Dipped in colored shades of sophisticated visuals—its patterns shifting, with rock beats and excursions into buoyant, rich brass sounds—brought forth strong turbulence effects and set the house on fire.

It also appeared that the group can swing deeply, stage impressive solos and are able to switch to surreal modes and connected moods. It all revealed in the brand new piece "Suomi," a homage of the group to Finland, as one of the few countries they had not yet the chance to perform. Lars Horntveth blew an impressive solo and the piece, a highlight of the concert, went through a couple of imaginative phases of sound—a strong closure of the first festival day.

The second night appeared to be a trio night in three steps, from the high north to the deep south and also from west to east: first, the all-Norwegian unit In The Country, consisting of pianist Morten Qvenild (a former member of Jaga Jazzist), double bassist Roger Arntzen, and drummer Pål Hausken; then the force of the German-Moroccan- Spanish Chalaba trio with pianist/saxophonist Joachim Kühn, vocalist/oudist/guimbri player Majid Bekkas and percussionist Ramon Lopez; and, finally, the Tarek Yamani Trio with Lebanese pianist Tarek Yamani and two young, internationally operating Slovenian musicians, tubaist Goran Krmac and drummer Kristijan Krajnčan. It promised to be an evening of stark contrasts on a virtual line: the first one a seemingly classic jazz trio; the other two constellations with a special bass voice, Bekkas' guimbri (a bass lute originating from Gnawa, the ritualistic healing music of Morocco's black African slaves; and then the Yamani unit operating in musical modes of the Near East with Krmac's Slovenian Alpine tuba.

Despite its classic appearance, In The Country—a trio existing for almost 10 years now— transcended the format by far, especially with its gradually infusion of advanced electronics. Indeed, Qvenild is the declared hyper piano man, studying and working out musically fruitful expansions of the classic 88-keyed string/percussion instrument. But not for nothing this trio bears the name In The Country, alluding to its music's pastoral characteristics. The trio unfolded music of a ritualistic, cinematic quality, enriched by carefully engraved traces echoing sounds from various musical pasts and cultures: lots of classic Afro-American soul music, Keith Jarrett and, maybe most surprising and not intentionally, musical shapes reminiscent of Jim Pepper's "Witchi Tai To." Considering that the main point of the classic piano trio is to join together a diversity of song material in exciting ways, the trio ultimately succeeded, and at a pretty high level.

After that, the Chalaba force brought a contrasting energy emanating from a quite different approach: extroverted, abundant, fiercely blazing, full of rich ornamentation and trance rhythms. Kühn is a veteran and, as a pianist, a key figure of the European avant- garde of the 1960s who has worked extensively with a variety of advanced musicians from the continent, like Jean-Francois Jenny-Clarke and Daniel Humair, and, since the late '90s, has also worked with Ornette Coleman. His involvement with Eastern music had its first outing in the duo with oud player Rabih Abou-Khalil on Journey To The Center Of An Egg (Enja, 2005), and after that with the Bekkas-Lopez trio which started in 2006. Kühn does this from a European background with sophistication as well as hot passion, whereas pianist Randy Weston— who was and still is deeply involved in Gnawa music—does it from his African-American background. Kühn found his very own way into that musical idiom with full dedication, deep understanding, great skill and enormous power. It is highly intriguing, for instance, when and how he injects fugue elements into this musical context.

A concert from this trio is always a passionate and highly energetic, cooking affair. That these three musicians know each other so well simply means that they can go to even higher places and are able to stir the fire still more. In the Gnawa spirit, you have to go for it and they did, with a much deep color elevating the audience. Taken by a deeper awareness of form they furrowed and furrowed. All three were also passionate stage personalities, making the encore, "Golden Queen" all the more enjoyable.

The final trio of the evening, despite possessing with strong Middle Eastern characteristics, was a manifestation of a quite different temperament and temperature. Tarek Yamani's trio—the pianist hailing from Beirut—is the product of the Groningen (Netherlands) connection for all three musicians, having met when they were studying at the conservatory there. Yamani first seemed to confine himself to humorous piano transpositions and re- workings of Middle Eastern traditionals, but happily—albeit late— out of his sleeve came some work that was the apparent result of rummaging through some Thelonius Monk and Herbie Hancock boxes. Some clearer contours emerged, but in the long run it was of varying intensity and effectiveness. It became clear that there is some potential but that its own form is still yet to be found by Yamani personally, and the trio as a whole.