Linley Hamilton: Right On The Wavelength 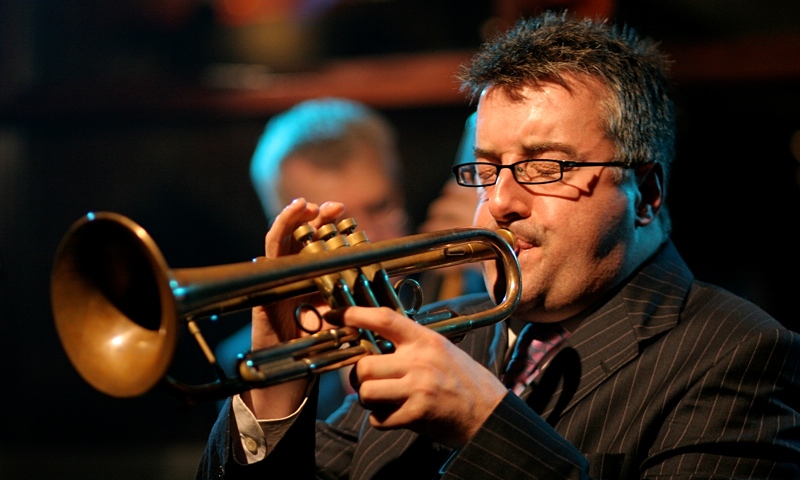 Jazz is a social language, a social construct. It’s like religion in many ways; it’s how people choose to live their lives. —Linley Hamilton

Trumpeter Linley Hamilton has been a mainstay of the Northern Irish jazz scene for well over two decades. An in-demand session musician, Hamilton has played on over a hundred recordings of various stripes, lending his burnished tone to rock and pop artists and singer-songwriters alike. But it's as a jazz musician, jazz educator, jazz radio broadcaster, and not least, as an utterly tireless advocate of the music that he's best known.

With a quintet comprised of some of the very best jazz musicians North and South of the border, Hamilton has done as much as anybody to promote jazz throughout Ireland and his BBC radio show never fails to promote nationwide talent wherever possible. His tutorial residencies at the Sligo Jazz Project reveal a musician with a deep understanding of the mechanics of the music and one who recognizes the importance of mentorship to bring the next generation of jazz musicians through. With Hamilton it's all about giving back.

Hamilton's drive to delve deeper into the music has seen him undertake a PHD in performance and the good Dr. Hamilton—as he'll soon be known—is just as much at home talking passionately about the nuts and bolts of music as he is performing on stage. The stage, however, is Hamilton's natural habitat, and there he can cut it with the best. Over the years he's played with singer-songwriter Van Morrison, saxophonists Jean Toussaint and Alan Barnes, clarinetist Ken Peplowski, pianist Kenny Werner and drummer John Riley amongst many others.

As a leader, Hamilton has produced 4 albums, the latest of which, In Transition (Lyte Records, 2014) is his strongest personal statement yet. Highly melodic and grooving, In Transition's blues and swing is rooted in the tradition, but unlike previous recordings this one marks a step towards crafting a greater proportion of original compositions. In Transition also embraces more contemporary repertoire not usually associated with jazz.

The official launch of In Transition came at Belfast's very own jazz festival, Brilliant Corners, an occasion which Hamilton clearly relished: "It was very special," admits Hamilton. "We took two or three days to rehearse in Dublin and did a couple of gigs before just to make sure that the set worked."

The Belfast crowd's reaction to Hamilton's quintet—bassist Damien Evans, drummer Dominic Mullan, pianist Johnny Taylor and guitarist Julien Colarossi—and the new music it presented was hugely positive: "There was a lot of love in the air," admits Hamilton. "The festival had a very positive vibe. It was a full house, we were hot off two gigs and we saved our best for last. It was a great gig. The whole gig for me was about the band and the punters, and me explaining the processes that were involved in the making of the album and the choosing of the music and hopefully shining some light on the songs so that their experience was more enjoyable."

Everybody at the packed Crescent Arts Centre for Hamilton's quartet gig at Brilliant Corners went home with a free copy of In Transition. It was a nice gesture on Hamilton's part but one that suggests the worth of CDs these days is less as a money spinner and more as a savvy promotional tool: "In a small local scene like Northern Ireland it's my reward to the punters who follow me," Hamilton explains. "I run a jazz gig in McHughes every Saturday afternoon and it's a pin-drop audience of between sixty and ninety people. This is my reward for them, to bring my band up from Dublin and let them see me working in a slightly different arena."

Hamilton is acutely aware of the importance of his audience and the value it brings to the gig: "I always think of the punters who attend the gigs as equal to the musicians," says Hamilton. "It's a sort of a partnership. You need the audience to bring the best out of the musicians."

The trumpeter is also sensitive to an audience's expectations: "I think you need to bring the audience along with you," he says. "You maybe need to be playing stuff that they're going to be familiar with before you play something new. I know that I'm going to see a lot of the people in my audiences at least ten times a year so I carefully sculpt the sets with that information in mind. I make sure there's something new and something fresh."

Hamilton understands that the social environment where the music is made, where it's performed and where it's heard are all closely related and he talks with enthusiasm about the writings of ethnomusicologists Paul Berliner and Ingrid Monson on music and place, which have influenced his thinking.

Hamilton's own environment these past few years studying for a PHD in performance has had, by his own admission, a fairly profound effect on his approach to making music and consequently the sound he produces on his trumpet. The processes are ongoing, as suggested by the title of the new CD.

"In the last three or four years I've had a chance to expose myself to new music, to think about the processes involved when I play," explains Hamilton. "If you'd asked me three years ago how I improvise I would have told you that I improvised horizontally, which means I wove linear, melodic lines through chordal key centers, and how I played paragraphs, sentences with commas, which are semi-quaver/quaver rests, full stops, which maybe have a longer rest and how those musical sentences are connected to each other. That's kind of changed," Hamilton says.

"I've approached a more vertical way of improvising where rather than thinking about aural tonal centers I'm looking at the vocabulary that comes one chord at a time. I'm thinking not just in terms of melodic referencing of the melody but melodically referencing the last bit of information that either I have played or somebody else has played, so I'm motivically developing my improvisations. I'm going through blocks of that.

"The transition," Hamilton expands, "is that I've basically come full circle now and I've realized that the most important thing to me is melody and sound; they are governing what I do. I still use a lot of advanced technique whenever I'm improvising in live performance and I still bring the same energy to the performance that people associate with me, but on In Transition I was doing my best to bring the melody and the sound to the fore, to lay back on some of the technical stuff and to try and bring an intensity to the music which didn't involve a lot of showboating, for want of another word. It changes the way I approach the songs, the construction of the arrangements and I guess it has governed the whole sound of the album."

Hamilton's methodology in the past will no doubt sound familiar to many musicians: "The way I have always improved as a trumpet player and jazz musician is by knocking my head against a brick wall trying to do something for six months and then all of a sudden bang, you wake up and you've made the progression you were looking for in that particular element."

The PHD course, however, has refined the process: "A switch has come on," acknowledges Hamilton, "but it's about research. "I've been able to analyze what other players do and I've transcribed their solos, seen the harmony they've used, the rhythmic pattern they've used and things that I would never have thought of, like resolution to the downbeat where they're hiding the strong downbeat and playing quavers through them and eventually they maybe resolve onto beat one or beat three at the end of a phrase."

Hamilton has turned the process inwards on himself with some revealing insights: "I've analyzed stuff in transcriptions of my own playing which I think are unique to me, but I'm sure they're not. Whenever I hear them they feel like traits, rather than ideas, that appear in my playing time and time again. Rather than seeing them as weaknesses I see them as strengths—as my identity." For Hamilton, it's all an on-going process: "I'm exploring that and trying to take it on to the next level."

Jazz education is a thriving business and has been for several decades but Northern Ireland has been slow to initiate jazz programs at advanced level: "They're common everywhere except here," says Hamilton. "We have a PHD course at the University of Ulster Magee in Derry, which is headed by Professor Frank Lyons, who's a music fan as well as a musicologist. It's attracting students from the North and South of Ireland and further afield.

"But in schools, the jazz curriculum in Northern Ireland is relatively basic," continues Hamilton, "and doesn't really touch anything significant in terms of what live music performance would be. There aren't any ambassadors of the jazz fraternity here brought into schools so there are still big gaps in the market and Northern Ireland in particular needs its leaders to be, not only evangelists but mentors to the younger ones coming through. There's a will but at the moment there isn't a way."

Just one hundred miles down the road in Dublin, the successful Newpark Music Center is leading the way in providing high-quality jazz education in Ireland: "Newpark has been remarkable," enthuses Hamilton. "It's developed to the point where it's a feeder college for Berklee College of Music in Boston. People are coming from all over the world to Newpark, from South America and all over Europe as the first step on their way to Berklee."

Newpark is a model that Hamilton clearly admires: "If we had the equivalent in Belfast you'd have PHD tutors from Dublin, from Belfast and further afield. You'd be sending these young musicians to play clubs, hotels and other venues and to set up their own performance arenas. You'd have audiences that they'd bring—student audiences—becoming part of the bigger audience sector that already exists and habitually goes to McHughes and the Brilliant Corners festival, going to support these younger players. You'd have collaboration between the established players and the younger players. You'd have my radio show promoting them, you have Stephen Graham's Marlbank.net and All About Jazz writing about them and the Jazz NI Facebook page and together you'd be creating a jazz dynasty as has happened in Dublin. It's something that we all just pray about here," Hamilton admits.