...what I'm striving for really is very close to the sound of the acoustic guitar, only louder. That's basically because I love that sound. 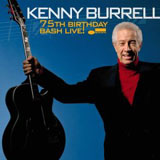