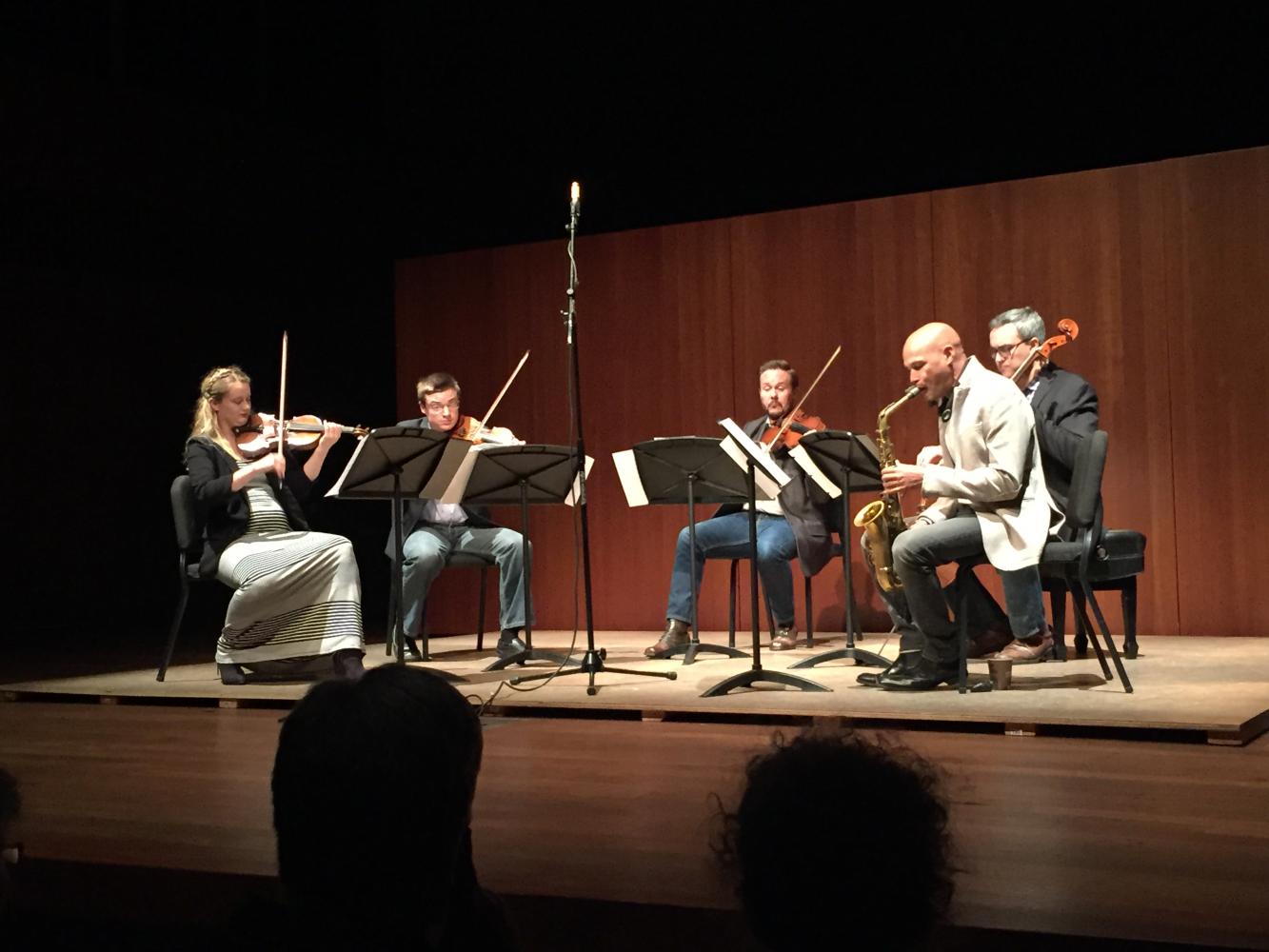 Regard the Hyde Park Jazz Festival as you would your favorite restaurant, where it just so happens that you are best friends with the chef. You have an embarrassment of riches because everything on the menu, which is fresh and delicious, organic, and mostly locally sourced, is free to you. When they do feature a special from out-of-town it is always innovative and original. Only one problem, you can only dine there once a year.

The HPJF celebrated it's ten year anniversary the last weekend of September, just as the first touches of fall made their appearance. The festival may be, as bassist Matt Ulery described it, "the real Chicago jazz festival." Like its downtown sister, all the events are free. It's just that unlike the melee that is Millennium Park, it strikes you that all the South Side attendees come to listen. Ulery kicked off Saturday's events with his quintet, Loom, at the Smart Museum, one of eleven festival venues, that included 2 outside stages, four museums, a bank, and the glorious Rockefeller Memorial Chapel. Shrewd visitors plotted their personal schedule around the eleven hours of music by 26 different musical performances, plus talks by composer and educator Dana Hall and Bob Koester of Delmark Records.

Needless to say, this review covers only a sampling of the performances. But each experience was like being handed a huge main course every time I sat down to listen to a new artist.

Ulery's quintet features the prominent voices of trumpeter Russ Johnson and bass clarinetist Geof Bradfield up front, with Rob Clearfield (piano) and Jon Deitemyer (drums). The bassist's music eschews the jazz standard 4/4 time, imposing a kind of chamber jazz formality of structure. The quintet is aptly named as each piece is heady with interwoven complexity and improvisation.

Next up was clarinetist James Falzone and bassist/vocalist Katie Ernst, a duo calling themselves Wayfaring. Their inspiration is American folk music, which in this 21st century, is hymns, blues, and jazz. Performing in the Oriental Institute Museum, the pair held the audience in a continuous rapture, covering Blind Willie Johnson's "Nobody's Fault But Mine" sung in ernest by Ernst (sorry) and Falzone's "Alton Sterling" and "And Yet Hope," where Ernst played a mash-up of Charles Mingus and William Parker's styles. The pair's natural affinity and musical empathy was apparent. They blended sounds; bass and clarinet, vocals, hand drumming, flute, and harmonium into a comforting quilt of positive inspiration.

The stimulus for the band Garden Of Souls is Ornette Coleman's 1968 Blue Note recordings Love Call and New York Is Now with John Coltrane's drummer Elvin Jones and bassist Jimmy Garrison. Performing on the east end of the Midway Plaisance playing Ornette's part was Chicago firebrand Nick Mazzarella, Geof Bradfield's tenor saxophone was fashioned after Dewey Redman, with Joshua Abrams (bass) and Mike Reed (drums). While nothing shocks the jazz sensibilities these days, the quartet did rekindle that Coleman cause célèbre with covers of "Garden Of Souls," "Toy Dance," "Love Call," and "Broad Way Blues." Mazzarella's alto performance, like that of Coleman, never surrendered to the music. He seems always to be blowing walls down, and here he ignited not only Bradfield but the furious bass of Abrams and the ever locomotive Reed.

On the west end of the Midway was alto saxophonist Greg Ward and his 10 Tongues, a little big band, performing the music from his critically acclaimed Touch My Beloved's Thought (Greenleaf, 2016). The music is an intense homage to the orchestration of Charles Mingus circa his Black Saint And The Sinner Lady (Impulse!, 1963) era. Standout performances were heard from trombonists Norman Palm and Christopher Davis, and saxophonists Keefe Jackson, Tim Haldeman and Ward.

The most intimate production occurred in the Penthouse performance space of the Logan Center. Saxophonist Matana Roberts, returned to her hometown to play two sets of improvisations, both in oratory and musical form. In the second set, topics ranged from Mike Ditka, Mike Tyson, Don King, to Von Freeman and Fred Anderson. Ms Roberts vocal cadence paralleled her playing, using her body as a resonator, and capturing the audience. She not only created something from virtually nothing, like fellow saxophonist Joe McPhee, Roberts can make everything from the same.

For the second year in a row, the Hyde Park Jazz Festival commissioned an original piece. Last year it was by trumpeter Ambrose Akinmusire, and this year saxophonist Miguel Zenon, the recipient of the 2008 MacArthur "genius" grant. He composed music for alto saxophone and the Spektral Quartet, a string quartet, titled "Yo Soy La Tradición." Drawing from Puerto Rican folk music, he found the intersection of traditional folk, jazz and classical music that fit hand-in-glove in this chamber setting. Unlike the raucous nature of the music heard on the Midway Plaisance, the crowd maintained a hushed respect for the premier of this music.

Back on the Midway and a taste of New York with trumpeter Tom Harrell and Trip, his quartet of saxophonist Mark Turner, bassist Ugonna Okegwo and drummer Adam Cruz. No quartet can negotiate the intricacies of post-bop like Harrell and company. The assembled crowd was intoxicated by the rush and power of this quartet.

Saturday evening at the Rockefeller Memorial Chapel found a solo performance by legendary Randy Weston. In the audience were most of the other artists who performed earlier that day. The nonagenarian pianist did not disappoint. He can still command a room with his large presence, easily filling the cavernous chapel with his original compositions.

Like any meal at a great restaurant, one can't taste everything. Left to others were performances by Orbert Davis, Wille Pickens, Dee Alexander, Marquis Hill, Douglas Ewar, and the Chicago Jazz Orchestra. Even though I got my fill, I swear I could have ingested more.