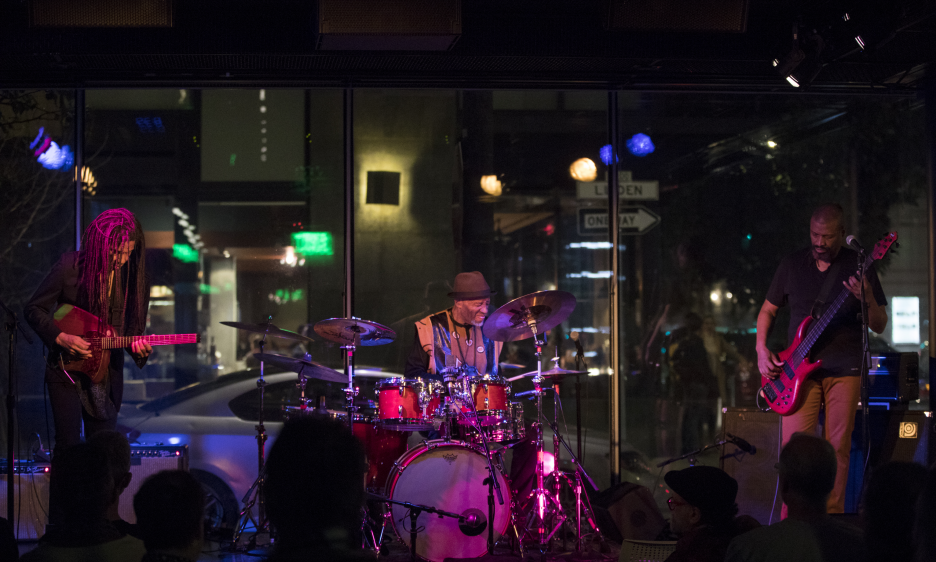 The electric bass, electric guitar and drum trio Harriet Tubman stands apart in the music world. As guitarist Brandon Ross notes, they are electrified yet based on spiritual influences such as the late Alice Coltrane, the late John Coltrane's wife who ran an ashram that Ross had the fortune to visit. Going strong since 1998, the group has found it difficult to find acceptance and, sometimes, gigs. Their two-night gig at SFJAZZ was a rare West Coast opportunity to see them.

Brooklyn born bassist Melvin Gibbs has played on more than 200 albums and has recorded with artists such as drummer Ronald Shannon Jackson, guitarists Vernon Reid and Sonny Sharrock, and saxophonist John Zorn. He has also joined numerous groups, such as the avant-metal Rollins Band.

Guitarist Ross has played with artists such as reed players Henry Threadgill, Archie Shepp, Marion Brown and Oliver Lake, as well as with the late pianist Geri Allen.

Taking the stage for their Thursday-night second set, Ross—wearing black and sporting long, thin braids—stood stage right, a mass of pedals and knobs at his feet. Center stage, the white bearded Lewis sported a poncho and a hat. To his left, Gibbs sported dreads and had his red bass at his command ready to produce the low-ringing bass drone of sustained chords he is known for. The band launched into the pulsating "Further Unknown."

"Where We Stand" featured guitar feedback, from Ross; Gibbs bent over, intently plucking his bass strings, and the tune ended with some drum rolls from Lewis. "Phototaxite," a new tune, which has yet to be recorded, followed, with evocative licks from Ross adding to the sonic bouillabaisse.

"No Great Sorrow" started with an extended mention of giant mushrooms in the time of the dinosaurs and had Gibbs plucking his bass at a 45-degree angle while Lewis cultivated the backbeat. Next up, "Glass Exits" offered sonic moans from Ross's guitar, loop effects and sonic moans. "Redemptioning," which was prefaced with an extended rap (during which the audience were lauded for attending), was followed by "Can't Tarry," which concluded the evening.