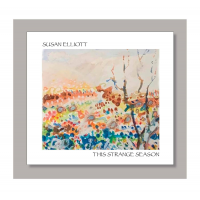 There are artists like Louise Van Aarsen who, with her 2012 Destiny (Self Produced), champion "grownup music," that is, music with traditional adult themes presented in a mainstream fashion. Add Susan Elliott to this group with her This Strange Season. Elliott is a member of the Houston Jazz Mafia, in spite of her decidedly non-jazz recording. Her music making is a mixture of American balladry seasoned generously with the resolving consonance of a wholesome and almost pastoral vision.

Stylistically, Elliott's compositions recall harmonically and melodically the music of the Indigo Girls and Paul Simon. This is not to say her sound is not her own, it is. Elliott's sound is informed by these artists and her results are both exceptional and impressive. Her lyric subject matter ranges from the Winter Solstice of "Long Nights Moon" (this could become part of the Christmas Season canon) to a relationship flagging in "An Ocean Between Us," to a grandmother's love in "Flora's Angels Locked the Door." Elliott's expressive pianism supports her graceful singing well, creating a warm environment for her music making.

Contributing greatly to this recording is guitarist Wayne Wilkerson, whose presence is tangible throughout the recording. Overtly, on "Long Nights Moon," he commands a folk presence, while remaining understated on the title cut. Joe Romano provides a precise harmonica to "Long Nights Moon" and the delightful "Fool for Love." Gary Weldon plays a tart chromatic harmonica on the whimsical "The Stars Made a Wish."

This Strange Season is populated with thoughtful celebrations of life rendered splendidly by accomplished musicians toward a satisfying and positive end. May we have more music like this.

Long Night Moon; An Ocean Between Us; Flora’s Angels Locked the Door; Where We Need to Be; Rushing Into the Future, Looking; Back at the Past; Fool for Love.