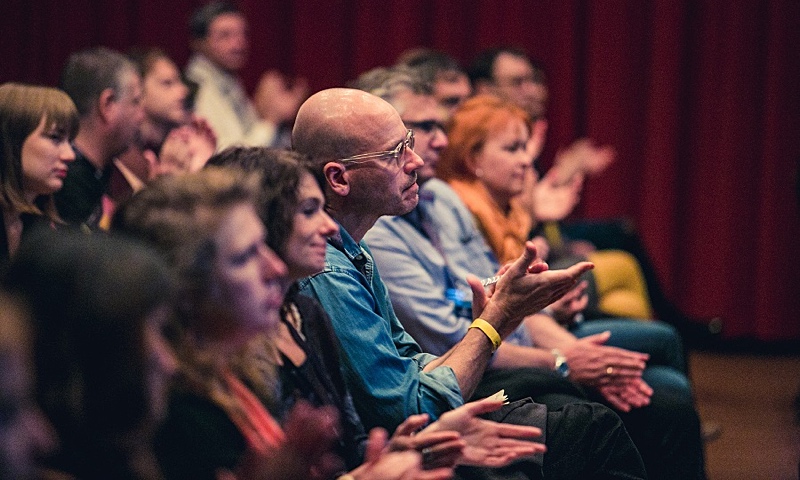 By IAN PATTERSON
October 6, 2016
Sign in to view read count

It is important for musicians today not only to play an instrument, but to become an instrument of change. &#151Danilo Pérez

We have two ears and only one mouth so perhaps we should listen more than we speak. This old maxim is often credited to Hellenistic philosopher Zeno of Citrium, though who's to say he didn't pinch it after being admonished by a fellow Stoic for not listening enough himself? We'll never know.

What we do know, however, is that the way we listen to music has changed significantly in the super-technological age that sweeps us along at dizzying speeds like leaves in a storm, or that blows over us like a hurricane meeting a tree, leaving us overwhelmed and bedraggled.

The fourth European Jazz Conference, held in the magnificent National Forum of Music in the historic Polish city of Wroclaw, was all about listening. Entitled Listen Up!, the conference addressed—both directly and indirectly—notions of how we listen to music, how we listen to each other, and how we might do both better.

Eleven Polish jazz showcases across the three evenings gave a taster of the tremendous depth and talent that exists on the Polish jazz scene. These concerts will be reviewed in a separate article.

The way we listen to music—the food of love—is evolving fast, moving away from a communal experience to an increasingly hermetic one, with legions of ear-plugged individuals on trains, buses and planes locked in their personal sonic worlds, oblivious to those around them. Legions more walk, run, cycle or rollerblade to a personal, carefully crafted playlist that acts as a soundtrack to the rolling panorama.

And of course, we are able listen to far more than we ever did. Youtube and music streaming services have together created a musical library of infinite proportions, one we can access from almost anywhere at any time. The past has become the present.

Increasingly, music takes up less and less physical space in our homes as vast quantities of music are stored digitally, consigning the good old second hand record store to the collective memory. Clouds on the horizon indeed.

For far too many people these days, music is consumed for free. Few will stop to consider, as they download and share files, how the musicians are supposed to continue making music if they aren't paid. The rapid demise of the value of recorded music (in a certain sense) has had the effect of increasing the necessity of musicians to tour. Incidentally, it's difficult to think of too many other professions where men and women in the eighties and some in their nineties have to travel frequently and often for extended periods of time to keep body and soul together.

Paradoxically, at the same time that live streaming can bring a performance to people around the world, it also negates the necessity, for some folk at least, to bother attending the gig at all.

Venues as diverse as abandoned train stations, factories, warehouses and squats (think Centri Sociali in Italy) are commonplace throughout Europe, offering ever-more alternatives to the club, concert hall and auditorium.

Even the exotic, however, slowly becomes standardized and institutionalized with repetition. The challenge for jazz promotors, in the main, is less about dramatic settings and more about meaningful ones. The spaces in which we listen to music was one of the central, recurring themes of the EJC 2016.

Music as never before is ubiquitous—interminable sonic wallpaper in lifts, supermarkets, cafes and restaurants, trains and shops assault our overworked ears at every turn, at every step. It's everywhere, whether we like it or not, all the time. Little wonder that the acoustic overload of urban spaces, the decibel mayhem, provokes sonic isolation—if not silence—through ear-plugs.

At the same time that scientists, neurologists and therapists understand more and more about the healing properties of music, evidence suggests that compressed music is damaging our hearing. And, just as live music brings ever greater numbers of people together, with the proliferation of music festivals of all kinds and mega-gigs such as Jean Michel Jarre's Moscow gig to an estimated 3.5 million people in 1997)—so too it has the negative capacity to create boundaries.

With the rapid evolution of music technologies and changes in the consumption, dissemination and practical uses of music, the EJC 2016 raised, and attempted to answer with varying degrees of success, some fundamental questions regarding music's multiple roles in society.

It was certainly apt that the EJC 2016 should invite keynote speakers of the international renown of Danilo Perez and Georgina Brown, and, in a one-on-one interview, Ben Ratliff. Apt because Wroclaw in its capacity as European Capital of Culture 2106 has pulled out all the stops. The EJC 2016, with its eleven Polish jazz showcases, was just one of over 800 events staged in Wroclaw and Lower Silesia in the year to date, events that have attracted more than two million people from all over Poland and abroad.

The opening day got under way with the lights out in the National Forum of Music's main auditorium with a surprise, unaccompanied clarinet improvisation from the front balcony. For ten minutes the music snaked this way and that, lyrical and visceral in turn, before the lights came up to reveal the music's creator—Mateusz Rybicki, one of Wroclaw's leading improvisers.

This musical welcome was followed by brief introductions from Piotr Turkiewicz and Ros Rigby—EJN Vice President and President respectively—who welcomed delegates and guests to the conference. Rigby then presented Stephen Meade—Artistic Director of the Manchester Jazz Festival—with the 2016 EJN Award for Adventurous Programing.

For two decades, the Manchester Jazz Festival has promoted up-and-coming jazz talent in northern England, providing a platform for bands—notably GoGo Penguin—to establish national and international reputations. Investing in the unknown, commissioning new work and seeking partnerships outside of jazz with the science, digital and literary worlds to extend the reach of the music, have been some of the cornerstones of Manchester Jazz Festival's growth and success. The road hasn't been free of bumps and Meade acknowledged the importance of "having the courage to get things wrong and be okay with that."

Clearly, Manchester Jazz Festival, under Meade's canny guidance has got an awful lot more right than wrong in its first twenty years.

Twenty five years ago, Danilo Pérez would typically have been described as a very talented pianist. Today, it's not quite so simple to hang a hat on the Panamanian. Pianist, improviser, composer, festival director, Artistic Director of the Berklee Global Jazz Institute, Goodwill Ambassador to UNICEF, UNESCO Artist for Peace and Cultural Ambassador to the Republic of Panama. It's been quite a ride since a twenty-something-year-old Pérez moved to Boston in 1984.

Pérez spoke of his childhood experience of the power of music as a tool for change, the inspirational figure of his father, and the great musicians he encountered in Berklee and subsequently New York, where he was invited by Dizzy Gillespie to join the United Nations Orchestra. For Pérez, Gillespie was much more than a musical mentor, showing the young Panamanian how jazz could be used for humanitarian purposes and as a tool for diplomacy.

Another towering figure in Pérez' personal and musical development has been Wayne Shorter, the quartet of whom Perez has been a member of since 2000. Shorter, Pérez recalled, advised him that "more than mastery of your instrument, it's about mastering your life, because that's what goes into your music."

Pérez recounted a concert in Panama in December 1989 that occurred just two days after the USA had invaded the country. Instead of canceling the concert, as might have been expected, the pianist and his band went ahead as scheduled. "I thought that if I die, I would like to die playing music," he recalled. To a packed club, Pérez' quartet played for two hours. "Through the power of music," Pérez described, "the concert became a ceremony of peace. We remembered our humanity and we fought war with jazz."

It was an experience that motivated Pérez to work for the benefit of his community, particularly with young musicians. Later, through his work with UNICEF, Pérez' eyes were opened to the extreme poverty and injustices in his country. These experiences engendered the Danilo Pérez Foundation, which, among many projects, utilizes music to increase memory capacity, improve mathematical ability and promote art and a culture of peace among children, adolescents and youth from socially disadvantaged, high-risk backgrounds.

In 2003, without sponsors, Pérez realized a long-held ambition when he and a small group of family and friends founded the Pananma Jazz Festival. Doubters at the time thought that a jazz festival would never fly in Panama, but Pérez had history on his side. He reminded the audience of Panama's historically significant jazz figures: Luis Russell, musical director for Louis Armstrong; pianist Sonny White, who recorded "Strange Fruit" with Billie Holiday, [as well as playing in the bands of Sidney Bechet, Teddy Hill, Lena Horne and Hot Lips Page]; pioneering jazz-fusion drummer Billy Cobham, of Mahavishnu Orchestra fame; Randy Weston and Eric Dolphy, who both had Panamanian roots.

The Panama Jazz Festival has a strong educational core, providing tuition and scholarships to young musicians. It is this positive philosophy, combined with the high international profile of the festival that has prompted the Panamanian government to pass a law that dictates that the Panama Jazz Festival should be enshrined as a national, annual event, with financial support from the government. It's an achievement that Pérez and his team can be rightly proud of.

Echoing the philosophies of mentors Gillespie and Shorter, Pérez stated: "It is important for musicians today not only to play an instrument but to become an instrument of change." This sentiment Pérez extended towards the audience of the EJC, inviting them to use their platforms, their festivals, to connect with society in a more meaningful level. The invitation, like Pérez' speech in general, provided food for thought.