Kamasi Washington & The Next Step at Michigan Theater 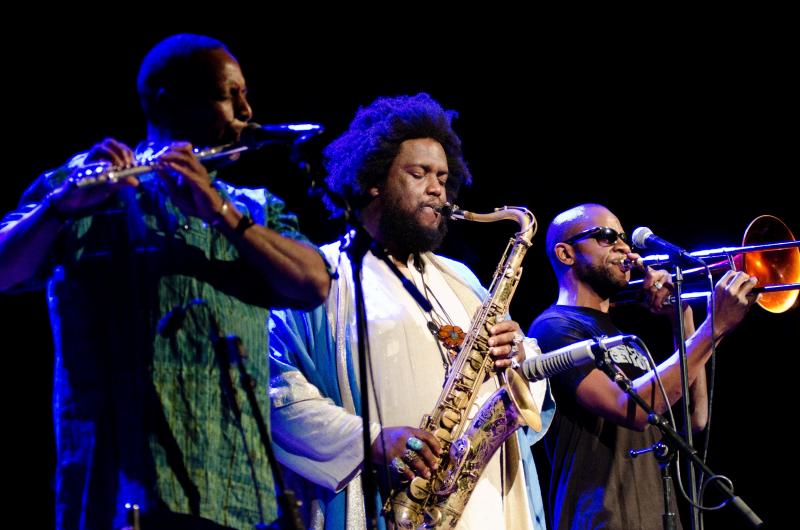 Much hoopla has surrounded the ascension of saxophonist Kamasi Washington most recently spurred on by his debut recording, The Epic. A motherlode of jazz sorcery, this audacious packaging of almost three hours of music seems to have spoken to a whole new generation of young people who have probably never even heard of Miles or Coltrane. Either smart marketing, bold musicianship, or a little bit of both, Kamasi has them hanging on his every move. This was clearly evident Friday evening as a line down the block anxiously waited to enter Ann Arbor's Michigan Theater for a performance by Washington and his eight-piece ensemble. This nearly sold-out event would be the first offering of the University Musical Society's 23rd annual jazz series.

The bold and declamatory "Change of the Guard" would bring on a robed and majestic Washington, supported by a large ensemble that featured two drummers. Echoing the kind of spiritual jazz delivered by the likes of Pharoah Sanders and Archie Shepp back in the late 60's, Kamasi wasted no time in making connections that led to a communal sense of celebration. It wouldn't be individual numbers or even solos that stood out by memory, but more a sense of being washed up in the fervor of the moment. The sense of theater and drama was not unlike that of attending a Sun Ra performance.

Introducing various members of his group with heartfelt and entertaining stories, Kamasi brought on trombonist Ryan Porter who was featured on the loping "Leroy and Lanisha." The sunny disposition of this piece was tailor made for Porter's strong and consistent statements. By contrast, "Henrietta Our Hero" composed for Kamasi's grandmother was a more reflective piece, with added textures provided by vocalist Patrice Quinn. Working slightly against the grain, the sound being controlled by Washington's crew was not always optimum, making it hard to hear Quinn at times and rendering complex ensemble statements as a muddy wash.

Keyboardist Brandon Coleman had plenty of time in the spotlight as the group tackled his gritty "Giant Feelings," a piece that Washington claimed was one of his all-time favorite songs. At one point, Coleman would break out his Moog Keytar and work the crowd with an impressive display of chops and tonal manipulation. In fact, most of the musicians on stage were "plugged in" in one way or the other and at times it was hard to tell where a particular sound was emanating.

An unusual and risky move, Washington opened things up in the middle of the show for an extended drum solo between Tony Austin and Robert Miller. The pair first started by trading licks back and forth before giving way to more lengthy individual statements. Cohesion was provided by the pair establishing a groove to use as a base. The flashier of the two, Miller also seemed to be the more musical of the pair and his own solo was dazzling on many levels.

A regal "Magnificent Seven" lived up to its name, a vamp based number that might have proven to be the perfect closer had the crowd not demanded an encore. Sagaciously bringing down the energy level for the message-driven "The Rhythm Changes," Kamasi and crew wrapped up the evening to lingering cheers and awaiting throngs eager to meet the man himself. Generously giving of his time, Washington held court in the lobby for some time signing autographs and continuing the communal vibe that he established from note one.