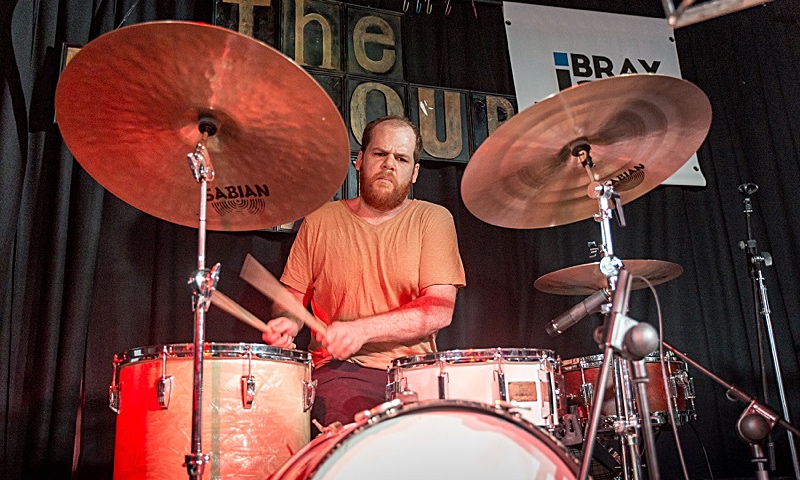 There are just so many cultural events going on in Ireland over the May Bank Holiday weekend that it can be a bit of a head-spin deciding what to opt for. Roots music gatherings, literature festivals, classical recitals, a chamber music festival, traditional Irish folk festivals, lighthouse visits, theatre festivals and gigs galore, all vie for the punters' hard-earned coin. Happily, The Irish Times always weighs in each year in with a comprehensive guide to the best of the cultural action. Its Pick of the Weekend for 2017 was the Bray Jazz Festival, with the paper's Cormac Larkin citing BJF's "consistently high quality, artistically credible line-ups."

The recognition is a real feather in the cap of BJF's George and Dorothy Jacob—who have been running BJF since 2000 through good times and challenging times—and will hopefully serve to shore up funding/sponsors for the foreseeable future, as well as act as a magnet to attract even more top class acts to this excellent festival.

Quality and artistic credibility were, as ever, hallmarks of eighteenth edition of the festival, which saw memorable headlining concerts from Lionel Loueke, Beats & Pieces Big Band and The Necks. The strong supporting cast included The Firebirds, Pilgrim and Malin Wättring Quartet.

Folk and roots music was well represented by the Carnatic music of the Shantala Subramanyam Trio, the Baltic folk colors of Estonian fiddler/singer Maarja Nuut and the irrepressible Norwegian accordionist Stian Carstensen.

Free gigs abounded too, with the best of Ireland's jazz, funk R&B bands packing out the bars along the Wicklow Wolf Jazz Trail, and contributing to a vibrant, fun-packed weekend of great music.

Stefan Pasborg is the driving force behind The Firebirds, a unique trio whose eponymous debut album took the music of Igor Stravinsky and Aram Khachaturian and injected voltage and serious grooves. To a small but engaged audience in The Well, keyboardist Anders Filipsen, saxophonist/clarinetist Anders Banke and Pasborg talked about their formative musical influences, the nuts and bolts of The Firebirds' chemistry and their approach to arranging such iconic classical music and weaving in improvisations.

The chat was punctuated by the trio's arrangement of Danish composer Carl Nielsen's "Oriental Festive March," a recorded excerpt from Stravinsky's Rite of Spring—you could imagine John Williams listening to this as he composed the ominous music to Jaws—and The Firebirds' own, highly personal arrangement of the same. "When you want to work with arranging other people's music," said Filipsen, "you have to find this really fragile balance between putting yourself in the music and respecting the original music."

The three musicians gave fascinating insight into the forces behind Stravinsky's ground-breaking music—the violence of the arrival of spring in Russia—and the primitive rhythmic functions that connect Stravinsky and The Firebirds. Explanations of Bach's harmonics—and the challenge of escaping his influence—playing with time, and the trio's approaches to improvisation would have appealed to musicians but were pitched at a level that was easily accessible to general music fans. The workshop also whetted the appetite for The Firebird's evening concert.

These workshops have been part of Bray Jazz for a number of years now and are an important part of the festival's fabric. More workshops on the other days, or Q&A sessions with some of the musicians, would be a welcome addition to future programs.

Button accordionist Stian Carstensen was making a welcome return to Bray, three years after a memorable concert at The Mermaid Arts Centre with Iain Ballamy in the occasional duo The Little Radio. That Music Network-promoted concert was outside the Bray Jazz Festival, but wherever Carstensen pitches up, and in whatever guise, a festive air, bristling with virtuosity and left-field humour, permeates his performances; this solo show at Bray's Town Hall was no exception.

Carstensen opened with a church-inspired arrangement of 16th century piece by Henry VIII's composer of songs for pheasant hunting -"a narrow field," Carstensen observed. The accordionist's repertoire, by comparison, spanned the centuries and made no distinction between so-called art music and more popular themes. A swaggering version of Felix Arndt's 1915 novelty ragtime number "Nola," a breathless "Tea for Two" and heady Gypsy wedding music from Bulgaria and Romania were all grist to Carstensen mill.

Switching to banjo and attaching little pegs to the strings, Carstensen paid brief homage to John Cage's "Music for Prepared Piano," and as the pegs were removed one by one, the music gradually morphed into bluegrass stomp. A melancholy traditional Norwegian tune on accordion, a foot-stomping Bulgarian sheppard's tune played on kaval with the breathy virtuosity of Roland Kirk, a racy Transylvanian fiddle tune transported to accordion and a sung version of Fred Tillman's "I Love You So Much It Hurts Me" revealed the breadth of Carstensen's folkloric and popular roots.

Yet all the joking and vaudeville entertainment that were a part of Carstensen's stagecraft couldn't detract from a technique as rich in harmonic sophistication, rhythmic panache and contrapuntal dexterity as the very finest concert pianist, and an improvisatory flare to rival any jazz musician.

The final piece saw Carstensen entwine beauty and gravitas in a Bach-esque, church organ-inspired recital that was hypnotic and uplifting, much like the concert as a whole.

A trio of equals, Lionel Loueke, bassist Massimo Biolcati and drummer Ferenc Nemeth have been playing together for eighteen years, since studying together at Berklee College of Music and although they had plenty of material to draw from the set was largely taken from Gaïa (Blue Note Records, 2015).

The trio's intuitive interplay was in evidence from the first notes of the melodically and rhythmically African-colored "Dream." Loueke's embrace of jazz has gradually opened over the years to allow more space for his Benin roots to shine but this was a performance of even more expansive ambition.

Loueke's pedals-driven guitar improvisation on the spirited "Broken" conjured jazz-fusion evocative of Herbie Hancock—an early mentor for the guitarist. Homage to Carlos Santana came with a slow-burning take on (Peter Green's) "Black Magic Woman" and the (Babatunde Olatunji's) drum feature "Jingo." Loueke's measured blues-funk and the spacious groove on the former was more James Blood Ulmer, however, than Santana.

On the elegant "Aziza Dance" African melodicism and rhythmic compass, funk and blues-tinged jazz merged seamlessly. Loueke, like Bill Frisell, has a little of the musical alchemist about him in the way he blends colors and textures to create something new yet familiar. The up-tempo version of the Bee Gee's "How Deep is Your Love" that closed the set saw Louke at his most fluid and George Benson-esque. Without pausing for breath, the trio launched a danceable African groove, closing the concert on a feel-good note.

Danish trio The Firebirds returned to The Well following their afternoon workshop to deliver a powerful set of classically-inspired compositions, compromised somewhat by the problems keyboardist Anders Filipsen experienced with the bass function on his keys.

By happy coincidence, the trio's new CD inspired by the music of Danish composer Carl Nielsen, Aladdin's Dream (ILK, 2017),was released that same day and it was with the progressive tonalities of Nielsen's "Little Suite For Strings" (1886) that the trio's adventure embarked. From a grooving chamber jazz opening evocative of The Doors, Stefan Pasborg's polyrhythmic bustle gradually steered the music into headier terrain, with Anders Banke's tenor saxophone soaring over Filipsen's reggae-tinged chords.

Bake switched between clarinet and saxophone during Pasborg's arrangement of three segments of Igor Stravinsky's Firebird Suite. The dreamy minimalism of "Introduction"—all washing cymbals and organ drone—gave way to the rhythmically complex, melodically striking "The Princesses' Game with the Golden Apples," which was followed by "Infernal Dance of All Kashchei's Subjects," a stonking passage characterized by expansive improvisatory excursions.

The centre-piece, excerpts from Stravinsky's iconic Rite of Spring, contained all the violence, beauty and gravitas of the original, with the trio's orchestral ambition matched by the originality of its execution. Three movements from Nielsen's Aladdin Suite passed from exotic Arabic sonorities—fired by Banke's tenor—through sombre, church-service reverie to fiery free-jazz. The encore, Armenian composer Aram Khachaturian's "Saber Dance," fused R&B bounce and Ellingtonian swing in irresistible fashion, with an exhilarating solo from Pasborg putting a personal seal on this most original and compelling of projects.

You need to arrive early at The Harbour Bar to grab a pew, and your view of the stage might not be great, but the venue—complete with new P.A. system—provides intimacy and atmosphere in spades, and for those reasons is one of the best venues of the BJF. The early afternoon gig on the second day of BJF saw Italian guitarist Julian Colarossi, flanked by drummer Connor Guilfoyle and organist Darragh Hennessy, give classy interpretations of pop, soul and jazz standards.

Note to Self (Self-Produced, 2013), Colarossi's debut as leader, was the elegant calling card of a refined guitarist, technically assured and oozing soul. Since then, Colarossi has gone on to record with Linley Hamilton's excellent quintet (In Transition Lyte Records, 2014) and in a duo with fellow guitarist John Keogh (Street Life, Self-Produced, 2016).

A gently grooving version of Al Green's "Let's Stay Together" provided the perfect vehicle for Colarossi's melodic, beautifully articulated improvisation. A swinging arrangement of George Shearing's "Lullaby of Birdland"—featuring solos from all three musicians—was dedicated to the late Louis Stewart, a mentor and inspiration to countless jazz musicians in Ireland, including Colarossi.

Colarossi's self-penned "Field Day" provided a set highlight, each note of the guitarist's lyrical solo carrying emotional weight. Hennessy's response felt a little reserved, and in general, the trio's balance tipped towards the guitar, with the organ's role a subdued one. However, this trio is a new one and it'll no doubt take more gigs and a honing of repertoire for the group chemistry to really shine.

The Beatle's "And I Love Her" inspired Colarossi to some of his most impressive soloing, where economy was the key to his lyrical persuasion. There was more to come from the trio but another gig in the town proved too strong a magnet.

The magnet in question was Roamer. The quartet of vocalist Lauren Kinsella, drummer Matthew Jacobson, tenor saxophonist Matthew Halpin and bassist Simon Jermyn—some of Ireland's most innovative musicians—was presenting new material in collaboration with poet Cherry Smyth. The opening number, a compelling hybrid of groove and ethereal soundscapes, gradually took wings, with the restless stirrings of one-armed Jacobson—the other in a cast—and Jermyn taking rhythmic shape while Halpin's tenor fluttered in Kinsella's slipstream.

Vocalist and saxophonist created striking harmonic waves at the outset of "Geometry," bass ostinatos, drums, explorative saxophone and Kinsella's soaring wordless vocal soon claiming the spaces in dramatic style. Smyth then recited one of her poems with Kinsella singing the lines in a sensual, bone-chilling union. Equally affecting the harmonics woven by Kinsella and Halpin on a notable Jacobson composition inspired by Haiku poetry, which juxtaposed strong rhythmic pulse and dreamy melody.