Before there was world beat music, before there was Afropop or any of the other genres of African music marketed to Western audiences, there was Babatunde Olatunji. Olatunji's 1959 “Drums of Passion” album may have been the first African music release recorded in a modern U.S. studio. That album and its successor “Zungo!” proved extremely influential in the world of progressive 1960s jazz, helping to introduce saxophonist John Coltrane and other jazz players to African music. Olatunji himself made the United States his home and became a durable and enthusiastic ambassador of West African culture

A member of the Yoruba ethnic group, Olatunji was born in 1927 in the Nigerian village of Ajido, about forty miles from the capital of Lagos. His father was a fisherman. Traditional Yoruba drumming accompanied many of the events of village life, and Olatunji was taken by his great-aunt to hear drum ceremonies. The drummers celebrated every occasion, proclaimed the coming of local politicians, evoked the dreams and aspirations of their people. The drumbeat of his childhood became the life blood of his adult experience as Olatunji grew and traveled throughout the world popularizing the music of his Yoruban heritage.

While still in Africa in the late '40s, the ever resourceful Olatunji read about the Rotary International Foundation scholarships offered to youths from war-affected countries. By 1950, Olatunji and his cousin were each awarded a scholarship and were on their way to America to attend school in Atlanta, Georgia. Olatunji came to the U.S. determined to succeed in the international arena, at the time he had no aspirations to be a musician.

In 1954, after graduating from Atlanta's Moorehouse College with a degree in Diplomacy, Olatunji moved to New York to begin a Political Science postgraduate program in Public Administration at New York University. Throughout his American education he had a unique perspective on the cultural divides between black and white Americans. Early on he realized that music, drumming in particular, had the ability to break down the long-established cultural divisions within the “Melting Pot” that America was thought to be in those days. To cover his expenses he started a small drumming and dance group. Recognizing the influence of African polyrhythms in jazz, some of Olatunji's earliest fans were the jazz greats of the time; men like John Coltrane, Yusef Lateef, Clark Terry, George Duvivier, Count Basie, Duke Ellington, Quincy Jones, and Dance luminary Alvin Ailey; not to mention the legendary producer John Hammond who produced Olatunji's first album. Even Dr. Martin Luther King, Jr., (also a Moorehouse graduate) invited Olatunji to tour with him.

In 1957 when producer John Hammond heard Olatunji performing at Radio City Music Hall with a 66-piece orchestra, he was so impressed that this fortuitous meeting led directly to the recording of “Drums of Passion.” Released in 1959 by Columbia Records, Olatunji's first album became an unprecedented, worldwide smash hit. It was the first album to bring genuine African music to Western ears, and it went on to sell over five million copies and is still a popular recording. This was followed up with “Zungo!” in 1961, which was also an international success.

Olatunji performed at the African Pavilion at the New York World Fair in 1964, where he was able to raise enough money to open the Olatunji Center for African Culture (OCAC) in Harlem, offering classes in African dance, music, language, folklore, and history. The National Endowment of the Arts help to fund Olatuni's OCAC teacher and student training programs which went to all over the schools in the New York tri-state area, all the way to Long Island. Mickey Hart first encountered Olatunji in one of those educational African programs

Both in concert and in the studio, Olatunji opted for a big sound, often using 20 or more singers, percussionists, and dancers. His releases; “Drums of Passion: The Beat,” (1989) “Drums of Passion: The Invocation,” (1988) and “Drums of Passion: Celebrate Freedom, Justice and Peace,” (1993)show both his willingness to experiment and find common ground with American musicians, and his devotion to ancient African traditions.

Olatunji and Mickey Hart had joined forces in 1991 on “Planet Drum,” a group that toured around the country and later recorded an album by the same name that won a Grammy Award. His composition “Jingo Lo Ba” has become a timeless anthem and a signature song for the rock group Santana. In 1997, Chesky Records released “Love Drum Talk,” which went on to be nominated for the 1998 Grammy for Best World Music Album. The late 1990s saw the re-release of Olatunji's pioneering Columbia recordings in a four-CD boxed set, and the musician kept up a full touring schedule interrupted only by a hospitalization for diabetes in the fall of 2001.

Baba was the single most important contributor to the popularization of African hand drumming in the United States. Baba created the popular Gun-Dun, Go-Do, Pa-Ta method of learning drum patterns in which these spoken sounds were able to help recall the sounds made on most hand drums -- with the Gun-Dun denoting the bass notes played with right and left hands; the Go-Do denoting the open tones; and the Pa-Ta denoting the slaps. This simple method revolutionized the learning rate for thousands of hand drum students in the West. He is also well-known for popularizing the popular Liberian rhythm Fanga (a song of welcome to which he added words), which was often played for him by his students when he would enter a workshop.

For the few years before his death Olatunji made his home at Esalen Institute along the wild Big Sur coastline in California, where he continued to teach while battling the ravages of Diabetes. Olatunji traveled throughout the world for almost half a century and gave over three thousand performances. His percussion workshops spread his knowledge of the drum, song, music, and African culture, inspiring generations of American musicians, many of whom have devoted their careers to African music and who are, in turn, spreading Baba's message to their students.

The album “Healing Sessions,” released posthumously in 2003was recorded in 1992 when Olatunji was at the height of his powers, and it features all the key members of his renowned “Drums of Passion.” These honor and invoke the Yoruban gods, or deities, the potent backbone of the healing and trance rituals of West African traditions. “Circle of Drums,” was recorded in 1993 but released in 2005, this set strays from his usual format, but offers varied examples of his drumming art.

Babatunde Olatunji passed on April 6, 2003, of complications due to his long struggle with the effects of Diabetes. Olatunji had a profound impact on everyone who knew him and everyone who had been touched by his love for the drum and the African culture that nurtured that love. Show less 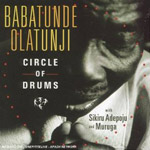 All About Jazz musician pages are maintained by musicians, publicists and trusted members like you. Interested? Tell us why you would like to improve the Babatunde Olatunji musician page.