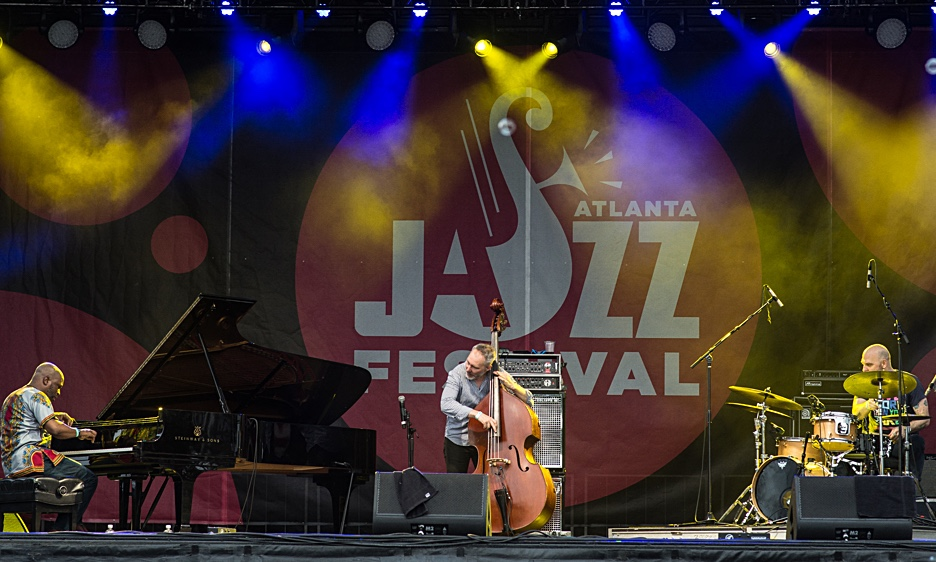 The Atlanta Jazz Festival prides itself on being one of the largest free jazz festivals in the United States. The 41st edition took place under a forbidding forecast of heavy rainstorms: the event announcements made a big point of stating that the festival was a "rain or shine" event. In the end the weather largely held—with the exception of a couple of brief showers on Saturday afternoon—and if the crowd size was reduced due to the weather forecast, it still looked like a big party in Piedmont Park to me.

My first show took me to the Contemporary Stage. Thumbscrew is like a contemporary jazz supergroup: guitarist Mary Halvorson, double bassist Michael Formanek and drummer Tomas Fujiwara form a true collective, with compositions from all of the group members as their core repertoire. I wasn't able to catch their whole set, but what I heard was memorable. I came in on a very musical unaccompanied drum solo, which led into a guitar solo with backwards looping. Formanek said the tune was "Saturn Way," named after a street in Pittsburgh. The next tune was named after "any cruel, heartless bastards you can think of." The head featured truly disorienting accelerandos and ritardandos: confusing the tempo for the listener, while demonstrating the close communication of the band. They were allowed to play an encore, a rarity in a festival that takes the performance schedule seriously. That piece included lots of whammy pedal guitar, an unexpected archtop guitar effect that Halvorson has made a hallmark of her style.

The festival was proud to present a special lineup of all-female jazz headliners on Saturday, for the first time in the festival's history. I heard a bit of the Yoko Miwa Trio on the Legends Stage—a powerful piano trio in the McCoy Tyner tradition—but the first full set I caught was Canadian saxophonist/flutist Jane Bunnett and her all-female Cuban band Maqueque. I heard them at the Montreal International Jazz Festival last year and was very impressed. They were equally impressive here, opening with "Little Feet" (which Bunnett dedicated to her nieces). After introducing the band—this version all hails from Cuba—she switched from soprano saxophone to flute for the band's title tune. She encouraged the audience to dance, but got few takers, despite the eminently danceable rhythms the band played, which in this tune included a workout for the percussionists. They slowed things down for a beautiful ballad treatment of the 1971 Bill Withers hit "Ain't No Sunshine." Bunnett dedicated "Tomenta" to the victims of the Hawaiian volcanic eruptions (which includes a friend of hers). Bunnett switched back to flute for "La Flamenca Maria," which was followed by "Changui del Guaso" from the pen of drummer Yissy Garcia. The set concluded with "Café Pilon" from the group's last album Oddara. They may not have gotten this audience to dance, but I'm still moving a little just remembering it.

Trumpeter Ingrid Jensen also hails from Canada, although she graduated from Boston's Berklee College of Music and has been associated with several American groups, including the The DIVA Jazz Orchestra Big Band and the Maria Schneider Orchestra. Her Ingrid Jensen Collective brought a bit of old-school fusion to the Legends stage. On the opener "Center Song" she played her trumpet through echo and wah-wah, like classic fusion trumpet by Miles Davis. She introduced her band: busy pianist Gary Versace, bassist Richie Gibbs (a Berklee classmate) and drummer Jon Wikan (her husband). "Landings" was reminiscent of early Weather Report, with Fender Rhodes electric piano and electric bass. Based on a folk song associated with Pete Seeger, it began with an open trumpet loop. "Hopes Trail" was a ballad, featuring an unaccompanied bass introduction. Jensen introduced a medley in honor of the late pianist Geri Allen which the band had recently started playing, combining Allen's arrangement of the traditional song "Barbara Allen" with her composition "Swamini" (which was dedicated to Alice Coltrane). It featured a relentless piano/bass ostinato, along with a looped melodica with echo (played by Jensen) and a section where Jensen played her trumpet into the open piano. To close the set she introduced Atlanta saxophonist Morgan Garrett, who joined the band for a 6/8 burner and another closing tune. There was a brief rainstorm near the end of her set, which she and the audience both took in stride.

The Linda May Han Oh Quintet was the closing show on the Next Gen Stage, and was easily the most experimental music I heard during the festival. The leader played double bass for the first half of the set, producing a sound much bigger than her diminutive stature would suggest. "Yoda" was a rhythmic tune with a clear cyclical structure: very satisfying to hear the turnaround return during the solos. Oh played an unaccompanied bass solo to lead into the next tune, "Lucid Lullaby" (she back-announced the titles later). Or possibly it was "Firedancer," the third tune played in the first part of the set. It was built on a bass ostinato, and all of the other instruments took turns commenting. In addition to announcing the song titles, Oh introduced her band: pianist Fabian Almazan; guitarist Matthew Stevens; drummer Rudy Royston; and alto saxophonist Greg Ward. Switching to electric bass for the rest of the set, she described "Speech Impediment" as someone's halting attempt to tell his beloved that he loves her. It began with a dense unaccompanied piano introduction (Oh said the piece featured Almazon and Royston). Oh played a repeated riff which she doubled with vocalise, while guitar and saxophone played a loosely doubled line. Royston's turn to shine came with an extended unaccompanied drum solo: beginning with soft mallets, he built up to drumsticks, finally adding snare drum only at the climax. The following tune had an especially jerky rhythm, and featured pairs of solos: first electric bass alternating with saxophone, then guitar alternating with piano. Almazan occasionally used a bit of electronic processing on the piano, which was especially noticeable here. A nursery rhyme-like line was repeated by the whole band to end. "Western" closed the set. Stevens took an especially exciting guitar solo, full of fast, skittering chromatic lines. The piece runs down like a clock before returning to the theme. Linda has been prominent as a side person, currently with guitarist Pat Metheny. This show demonstrated equal facility as a composer and band leader.

Saxophonist Antoine Roney is not as well known as his brother, trumpeter Wallace Roney, but he has worked with many "name" players and recorded several albums as a leader. He immediately proved himself as an exciting (and technically assured) tenor saxophonist with the fast opening bebop tune at the Next Gen stage. It recalled Sonny Rollins to me, but part of that may just be the trio format of saxophone, double bass and drums that Rollins sometimes favored. He switched to soprano saxophone for the second tune, a modal one based on a double bass ostinato, similar to several John Coltrane pieces. Taking up the tenor again, he slowed things down with a slow blues, followed by another fast jazz standard that featured bass and drums at the end. Drummer Kojo Odu Roney is Antoine's son, and something of a prodigy. He was playing drums in his uncle Wallace's band at age thirteen, and is an impressive player, swinging and creative. It was a pleasure hearing real bebop from this trio, but unfortunately I had to dash before the end of the set. So I don't know if Roney announced the titles, or the name of his bassist!

Guitarist Russell Malone is well known for his time as sideman with organist Jimmy Smith, singer/pianist Harry Connick, Jr., and (perhaps most visibly) with singer/pianist Diana Krall. But he has made many albums as leader as well, and the Russell Malone Quartet sounded like a well-oiled machine. Pianist Mulgrew Miller's soul jazz tune "Soul-Leo" opened the set, followed by the fast bebop of pianist Cedar Walton's "The Rubber Band." Exciting solos all around on this one. Malone played a beautiful unaccompanied introduction to a song made famous by Glen Campbell, songwriter Jimmy Webb's "By the Time I Get to Phoenix," which slowed things down to ballad tempo. Next they played an original from Malone's most recent album Time For The Dancers (HighNote Records, 2017). "Ballad of Hank Crawford" is dedicated to the late saxophonist. "For the Love of You" took things in a more contemporary direction for a cover of an Isley Brothers hit. "Your Zowie Face" is a Jerry Goldsmith song from the soundtrack of the movie In Like Flint (which Malone remembers seeing as a kid, "probably much too young"). It's in 6/8 time, and the piano solo included a clever quote from the Burt Bacharach/Hal David song "Wives and Lovers." Malone played another unaccompanied arrangement, this time the Jackson Five hit "I'll Be There." Far more than just another populist selection, it was also a technical tour-de-force, including counterpoint and harp harmonics. It's nice to be in the hands of a master: there is clearly little about playing the guitar that Malone has not mastered. After a version of "Alfie" (another movie theme, and another credit to songwriters Burt Bacharach and Hal David) the leader introduced the band. Pianist Miki Yamanaka (who was playing her second show with the band, which was not audible—she fit like a glove); double bassist Luke Sellick, and drummer Anwar Marshall (who is from Philadelphia—Malone commented that he's never played with a Philadelphia drummer he didn't like). The set ended with trumpeter Freddie Hubbard's "Sweet Sue," but Malone immediately began a funky, overdriven blues as a brief encore.

M.F. Production's Latin Jazz All Stars were true to their name, delivering a blistering set of Latin jazz. Flutist Nestor Torres was frequently the center of attention. He announced the opening tune as "Cafe Mario," then moved on to a classic Herbie Mann tune. Trombonist Jimmy Bosch was featured on his tune "Otro Opportunidad," which also featured a section trading fours between trombone, trumpet (Danny Champagne, who was consistently impressive as a soloist) and flute. The pianist joined the conga with vocals and cowbell clave for "El Hombre." Then guest vocalist Claudia Acuna was introduced, first singing a Latin version of pianist/composer Thelonious Monk's "Well, You Needn't," followed by a traditional Spanish song. Percussionist Pete Escovedo (a member of the original Santana band, as well as father of Sheila E.) was featured on Ray Barretto's "La Cuna." The set closed with Almaria Cervantes' "El Marahe."