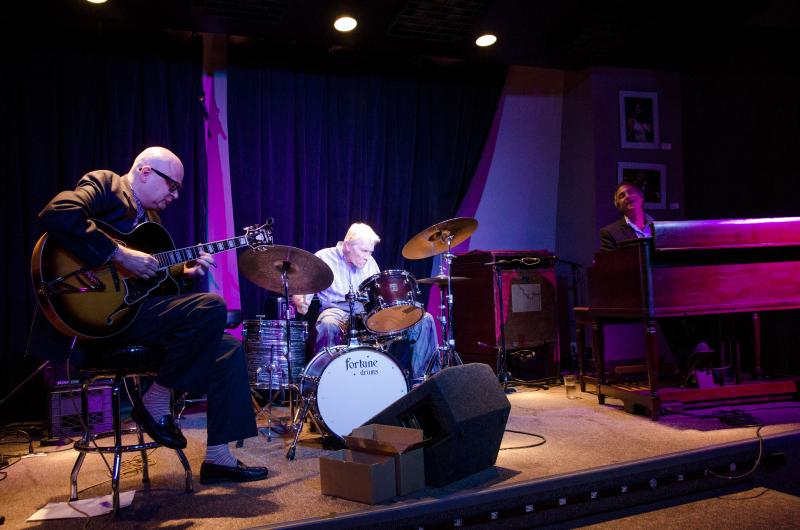 Booking live jazz on a nightly basis anywhere other than New York City is a risky proposition to be sure. Just ask former Cleveland club owners Ron Busch and Anita Nonneman about this and surely they will have ample stories to tell. Back in 1991, Busch started the first Bop Stop on Cleveland's west side by revitalizing a corner storefront. Five years later, he moved to a larger space in the downtown area before ultimately building his own structure in 2000. That 4000-square-foot space overlooking the Cleveland Shoreway and Lake Erie quickly gained a solid reputation as a superb acoustic setting for jazz over its seven year run under the guidance of Busch and Nonneman.

The fickle nature of the times and the changing jazz landscape led to the closing of the Bop Stop in 2010 and a three year search for a buyer who was interested in carrying on its original intent and not flipping it into a hot dog shop. After a lengthy search, Busch and Nonneman ultimately decided to donate the building to the Music Settlement, a 105-year- old institution dedicated to enriching the community through music and education programs. Three years later and the Bop Stop is an educational space by day and a first class jazz venue by night guided by the knowledgeable hands of director Gabe Pollack.

On a recent unseasonably warm Friday evening, Northeast Ohio guitarist Bob Niederriter and his trio with guest Tony Monaco delivered three topflight sets to an appreciative crowd who took advantage of the club's tiered semi-circle setup which offers clear sightlines to the stage. Having just recently purchased a completely overhauled Hammond B-3 for the club, Pollack has his eyes set on booking one or two dates a month featuring an organist of note. On this occasion, Monaco wasted no time digging in and putting the console through its paces.

Niederriter makes his home in Kent, Ohio, but spent time at the New School in New York where he studied and played with heavyweights such as Jim Hall and Reggie Workman. His approach is highly melodic, the rich tone of his hollowbody giving ample weight to his mercurial lines. Strategically interspersed with Niederriter's long phrases were rapid fire runs and tremolos that added variety and spice to his engaging solos.

Cleveland area icon Val Kent has dabbled in many genres over the years and in addition to jazz gigs has played with everyone from the Mills Brothers to the O'Jays. His support was highly musical and responsive to the musical inroads made by both Niederriter and Monaco. With the first set offering an opportunity for the trio to settle into a groove musically, the second set kicked into high gear with an animated "In Walked Bud" followed by an incendiary romp through "Caravan." As Niederriter capped off his own bristling statement, Monaco upped the ante with a tour de force solo that literally had him pulling out all the stops.

Like the first two sets, Niederriter hit on a sagacious pacing of numbers for the late show starting with "Summertime" delivered with a straight eight feel. A relaxed "Softly, as in a Morning Sunrise" gave way to some incendiary jamming on "Perdido" and "A Night in Tunisia" with both Niederriter and Monaco going toe to toe. Of course, mere words make it sound like just business as usual owing to the Bop Stop's eventful schedule, but the club's ongoing track record and support by the Music Settlement bodes well for the diversity of jazz venues in Cleveland.