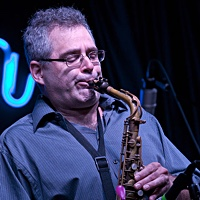 Ed Palermo is one of the greatest musicians and arrangers in the world.

Ed Palermo is not a “business as usual” musician. After all, when most people think of “big bands” they think of Duke and Dorsey. But go to see Ed Palermo’s Big Band and you might hear Zappa, Hendrix, the blues of Paul Butterfield & Mike Bloomfield or one of Ed’s own compositions, loaded with lush turns and unexpected twists.

“I first heard Ed Palermo’s music in a small club in the SoHo section of Manhattan. He was using the instrumentation of a traditional big band yet his arrangements and songs were anything but that. When I thought the music was going a certain direction, it would suddenly turn a corner. Ed has the ability to keep that important balance between cohesiveness and unpredictability. Ed Palermo’s music is alive and represents now.”

Ed’s interpretation of the music of iconoclastic composer Frank Zappa has brought him wide recognition. His first CD of this material, “the ed palermo big band plays the music of frank zappa”, garnered rave reviews. Downbeat magazine gave the CD a 4-star review. Palermo’s second CD of Zappa material, entitled “Take Your Clothes Off When You Dance”, has been received with equal enthusiasm from publications all over the world, including another rave from Downbeat.

Ed recently brought his band to the National Public radio (NPR) studios in Washington, DC to record a segment that aired on NPR’s Weekend Edition show. The show featured performances mixed with interviews.

Before forming his own band, Ed toured and recorded with many different artists including Aretha Franklin, Tito Puente, Eddie Palmieri, Celia Cruz, Lena Horne, Tony Bennett, Mel Torme, Lou Rawls, Melba Moore, Debbie Gibson, The Spinners and countless others. He has written and arranged for the Tonight Show, Maurice Hines and Eddy Fischer. He also arranged the music for a recent James Brown concert at the Hollywood Bowl.

The Ed Palermo Big Band Releases A Blues-Rich Tribute To The Music Of...

The Ed Palermo Big Band  Flaunts the Union Jack with The Great...

A Lousy Day in Harlem is a great day for jazz with The Ed Palermo Big...

Enter the "Ed Palermo - Oh No! Not Jazz!!" Giveaway at All About Jazz!

“[Palermo's] wisely chosen to emphasize Zappa's early and mid-career work, as that's the music which is more fluid and graceful—and more apt to swing... reveals the lighthearted playfulness and rhythmic intelligence at the core of Zappa's best work...” —Downbeat.

“In arranging Zappa's tunes for big band, Ed Palermo has thrown new light on his legacy while retaining the composer's original melodic and harmonic designs. The arrangements also leave plenty of room for the band's gifted soloists...”  —The Washington Post.

All About Jazz musician pages are maintained by musicians, publicists and trusted members like you. Interested? Tell us why you would like to improve the Ed Palermo musician page.