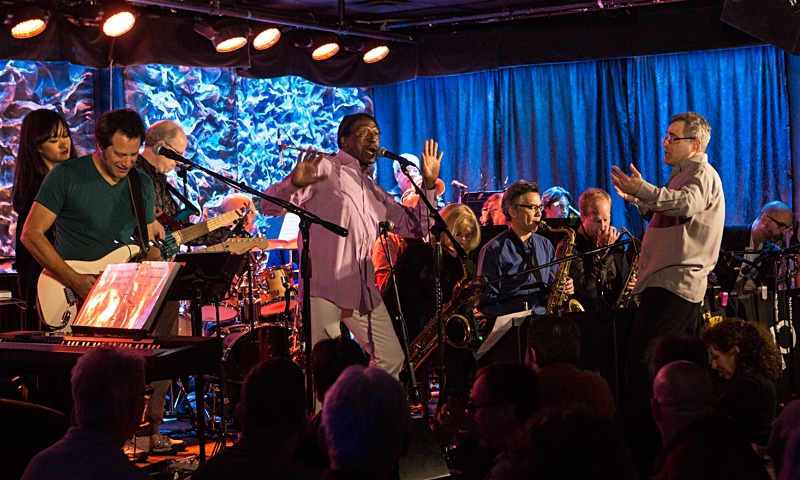 You can just about always count on a number of things in any show by the Ed Palermo Big Band: the music of Frank Zappa; inventive arrangements, richly crafted; tight, stellar playing by the ensemble; a nearly non-stop pace; and—maybe above all—a lively sense of humor. Not one to disappoint, the leader started off the first set of Friday's show with an important announcement: he would be wearing his wife's pants for the entire evening. ("How do you women do it? The zipper's backwards!") He promised that this would in no way diminish his masculinity, but "the way I conduct will!"

A couple other words of introduction put the performance in context: the Friday and Saturday shows at the Iridium celebrated the recent release of Roxy: The Movie, documenting Zappa's legendary December 1973 shows in Hollywood, as well as the release of the band's new album, One Child Left Behind on the Cuneiform label. (The first night of the Iridium stay was devoted to the music of Todd Rundgren.) The Zappa tunes on the set lists came from the new film as well as the new album. The presence of vocalist and tenor saxophonist Napoleon Murphy Brock was a special highlight—Brock appears in both the film and the recording.

The early set kicked off with several tunes seguing quickly from one to the next, highlighting the well-rehearsed ensemble, beginning with Zappa's "Dog Breath Variations" mashed up with a bit of "Andy." Palermo's rendering of the Beatles' "Eleanor Rigby" was in the mix along with the Zappa tunes, with a stand-out solo by Katie Jacoby on violin. Napoleon Murphy Brock joined the band about a third of the way through the set for a string of more Zappa, starting with "Po-jama People," which appears on One Child Left Behind. The singer brought boundless energy and great theatricality to the stage, prancing, dancing, and mugging all along. Brock's opener also featured a blistering alto sax solo by Clifford Lyons and a fine turn by Ted Kooshian on electric keyboard.

Brock continued at center stage for the rest of the set, with "Florentine Pogen" up next, also featuring tenor saxophonist Ben Kono, followed by "Penguin in Bondage," with Palermo taking his one solo turn on alto sax. On "Cheepnis," you'd swear that Brock's hilarious falsetto was the product of a couple sips of helium. The tune also included vocals by guitarist Bruce McDaniel, a band mainstay who mixed and mastered the new album. The band took a brief pause after "Cheepnis," when Brock gave a little tribute to Zappa, describing how his appearance in the "Roxy" film was two months after he joined the band, which also included George Duke. He described Zappa as especially prescient about the legendary Roxy show: "he told me then that' I'd be here now to tell you about it 43 years later. Maybe he was a genius!"

Back to the music, the band introduced the next run of Zappa themes and mash-ups with the first two lines of the Beatles' "Do you Want to Know a Secret," leading into "Echidna's Arf" and the final number of the set, a complete version of "Andy." The tune is also the closer of the band's new album, ending with Brock repeating in the final chorus the existential question, "have I aligned with a blown mind, wasted my time on the wrong kind?"

And lest this review be incomplete—his shirt tails weren't tucked in, so you couldn't get a great view, but Palermo's wife's pants did look pretty good on him.