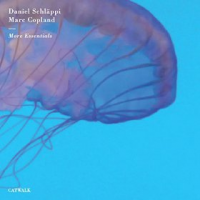 More Essentials is just that, a continuation, after much touring, of the partnership between bassist Daniel Schlaeppi and pianist Marc Copland. The extremely high standards set by its predecessor, Essentials are more than met by this second release.

The structure of this release is the same as before: tunes, some more, some less well known (including one original by Copland) are connected by "Essentials," which are short improvisations, mostly by Schlaeppi, with one duo effort. These are numbered and start with "Essential 9," continuing from the last "Essential" on the previous recording.

These short pieces have the effect of both introducing and commenting upon the tunes played between them in the manner of aural "palate" cleansers. There is much intro and outro silence surrounding all of the tracks, so the feel of the album close to that of a live set, but without applause. The sound is crystalline, with kudos going out to the recording engineer, Martin Pearson in Zurich and Jon Erik Kongshaug who did the mixing at Rainbow Studios in Oslo.

It goes without saying that the interplay and the sense of connected musical minds is very strong throughout this hour of music. Copland is once again magnificent, weaving lines that continually surprise, surrounded by clouds of pedalled notes that create shimmering harmonics. Schlaeppi's role, aside from creating the mood of dark, introspective intensity in the "Essentials," is much more than mere harmonic or rhythmic support (both of which are very strong), but also is a voice which both leads and responds. The sound stage is very large and the duo feels very exposed on the one hand, and yet there exists the intimacy of a private concert.

All of the playing is wonderful, but there are two tracks on More Essentials which stand out —"Blue In Green," which opens the set (after the introductory "Essential 9") and "Yesterdays" (which also appeared on the first album), which dominates the end of the set. Both suspend time and set up the mood of "beautiful intensity." The latter tune in particular is almost harrowing with its dark harmonies and dense dissonances, especially when compared to its earlier version's lush romanticism.

Perhaps the decision to follow this monumentally intense version of "Yesterdays" with the light, jaunty and bouncing Charlie Parker tune "My Little Suede Shoes" came from the felt need to lighten the mood at the end of the record, and might not feel right (or even needed) to everyone.

Nevertheless, Schlaeppi and Copland have created with More Essentials, and especially when combined with Essentials, an extraordinary document. Repeating the earlier injunction—listen, just listen.