BY EDWARD BLANCO
January 14, 2016
Sign in to view read count 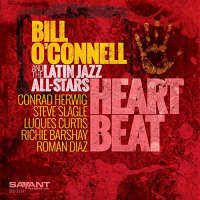 Veteran New York Pianist/composer and arranger Bill O'Connell, early on developed a reputation in the post-bop/hard-bop area but, since then, is best recognized as one of the finest musicians and long-time proponents within the Latin Jazz genre. With decades as a performer and a host of albums to his credit, O'Connell presents his fourth release for the Savant label on the stellar Heart Beat where the pianist offers an exciting repertoire of seven originals and two covers of modern Latin jazz at its best. Laying down the Latin grooves and beats are O'Connell's Latin Jazz All-Stars that include some big names among them, trombonist Conrad Herwig, saxophonist Steve Slagle and young bassist Luques Curtis.

Performing in various formats throughout his career, here he uses a core four-piece rhythm and two-piece horn section augmented by vocalist Melvis Santa, percussionists Clemente Medina and Diego Lopez on a few tracks. Opening the set with one of the outstanding track of the album, "Vertigo" features the pianist introducing the tune in odd meter signature before breaking out and letting the band come in sizzling fashion with Slagle on soprano, Richie Barshay' furious drumming and Herwig's propulsive trombone solo, completes the piece in blistering style. Starting out slowly once again is the following "The Eyes of a Child," perhaps one of the most percussive pieces of the set with both percussionists Medina and Lopez weighing in on the bata drums as Slagle leads the music on the flute.

Displaying some of his right-hand finger play on the keys, the pianist helps "Awani" take off as one of the liveliest tunes of the album featuring vocal support from Singer Santa and a torrid solo from Slagle on the alto. Having a long-time affinity for the music of Brasil, O'Connell includes a gorgeous rendition of the Antonio Carlos Jobim classic "Waters of March," clearly a standout tune of the disc that features the pianist in center stage here despite some fine soprano work by Slagle. The other cover tune of the set is the Wayne Shorter standard "ESP" performed here with a lot of heat and spice from the band in an all-around burner of a track.

The percussive title track celebrates the main role the conga has as the "beating heart" of Latin rhythms featuring Cuban Conguero and percussionist Roman Diaz as O'Connell states "The rest of us do other things while Roman holds down the fort." The following "Wake Up" is symbolic of the leader's compositional brilliance in writing excellent melodies that are always appealing to everyone including those non-Latin music listeners.

The set closes on "Peace on Earth," a homage tune to Obatala and Orisha, an Afro-Cuban (deity) of the Santeria religion. The piece is spiked with vocals and bata drumming giving the tune a spiritual quality the leader was looking for as the musical embodiment of the Latin pulse. Heart Beat is a dynamic album from Bill O'Connell and his Latin Jazz All-Stars, pronouncing the Latin jazz rhythm as never before.

Vertigo; The Eyes of a Child; Awani; Waters of March; Tabasco; ESP; Heart-Beat; Wake Up; Peace on Earth.

About Bill O'Connell and the Latin Jazz All-Stars