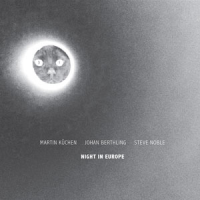 As one of Europe's premier saxophonists Martin Küchen boasts a diverse resumé. He often fronts a series of groups designed to negotiate his emotive compositions such as Angles, All Included and Trespass Trio, but also participates in more liberated sessions. One such in the company of bassist Johan Berthling and English drummer Steve Noble produced Night In Europe. Their pedigree is evident in their associations. Berthling features as part of the assorted Angles agglomerations, as well as with another incendiary saxophonist in Mats Gustafsson's Fire! and also graced the excellent Casa Futuro (Clean Feed, 2015), while German reed legend Peter Brötzmann has co-opted the drummer into various of his working units.

The two long and one short pieces on this limited edition LP were selected from two nights at Stockholm's Glenn Miller Cafe in December 2014. They present a discursive manifesto, edgy and restless, rarely settling into extended grooves. Küchen's mastery of timbral distortion exacerbates this feel. In the absence of the searing melodic hooks his tunes provide, he doesn't dig in for the extended haul. The results are episodic and grippingly unpredictable.

"Night In Europe 1" explores a range of dynamics from loud to quiet and back. Küchen's muffled slurred tenor saxophone evokes a more unhinged Archie Shepp (from the time of I Know About The Life (Sackville, 1981)). Here and on each subsequent cut he uses some sort of insert in the bell of his horn to generate a metallic buzz, enhancing the anguished mood. Berthling maintains momentum with throbbing pizzicato, which eases into a repeated figure partway through the track. Noble, often one of the most rhythmic of free drummers, eschews regular meter in favor of a tumbling rumble, but also partakes of his trademarked tone color play with untethered cymbals.

"Night In Europe (again)" retains a high level of intensity throughout its brief span, but by contrast "Night In Europe 2" begins in a succession of pulsing staccato fragments. Later a faster pace heralds some braying exhortations from the saxophonist. Berthling's finest moment comes with the bow in his hand when he careens and abrades through speech like inflections and harmonics. Küchen interjects punctuations by blowing two saxophones simultaneously, before he picks up the thread on frayed vocalized sopranino. It's one of the highlight of album.