By Karl Ackermann
October 16, 2017
Sign in to view read count 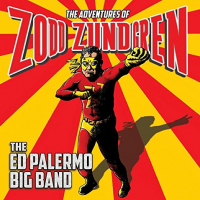 It isn't a characteristically positive sign when an album incorporates obvious humor into its credits and occasionally, the music itself. The Adventures of Zodd Zundgren could raise red flags with its title, personnel adjectives such as "Terrifying Trombones" and listing Kellyanne Conway as "Alternative Executive Producer." But a listener familiar with The Ed Palermo Big Band, Cuneiform catalog, including Oh No! Not Jazz!! (2014), One Child Left Behind (2016) and The Great Un-American Songbook, Vols. I & II (2017), knows that the less than nuanced gag lines are simply throw-aways. The real fun comes in the form of jazz interpretations of pop and rock luminaries.

The Adventures of Zodd Zundgren is derived from the mashup of Todd Rundgren and Frank Zappa compositions, randomly ordered across twenty-five compact tracks on a single CD. This album is not Palermo's first go-round with Zappa material. The Ed Palermo Big Band Plays the Music of Frank Zappa (Astor Place Records, 1997), Eddy Loves Frank (Cuneiform Records, 2009) along with Oh No!... have their roots in Palermo's early fascination with the creative music icon and years of residency at New York's The Bottom Line, where his interpretation of Zappa music drew a regular audience. If Zappa's affinity for jazz was a draw for Palermo, then Rundgren's connection to the British invasion may have been another. The Great Un-American Songbook was Palermo's paean to The Beatles, Rolling Stones, King Crimson, Traffic, Jethro Tull and others. Rundgren has worked with members The Beatles, The Who and Cream. He experimented with genre-less creative music on A Wizard, a True Star, an album that included Randy Brecker, Michael Brecker and David Sanborn.

Following the opening "The Solemn Z-Men Credo," a short choir piece of undetermined origin, Zappa's "Peaches En Regalia" sets the stage for much of the expansive big band swing and rock mixture to come. Rundgren's "Influenza" follows suit, enhanced by Katie Jacoby's euphoric violin. The most well-known of Rundgren's early songs, "Hello, it's Me" is essentially true to form but with a subdued brass backdrop and an appealing lead vocal from guitarist Bruce McDaniel. Another Rundgren gem, the bluesy "Broke Down and Busted" features a vocal that toys with, then rises well above lounge lizard status. "Zoots Alure" from Zappa's 1976 album of the same name, trades its original edginess for dramatic and effective orchestration.

There is plenty of variety across these twenty-five tracks. The purely nostalgic feel of "Janet's Big Dance Number" is matched by the scat of "Echidna's Arf (Of You)," as supplied by guests, The Louisiana Swindle Singers who may or may not be a one-off on this project. There is a slight western swing element to "You Are What You Is" thanks to Jacoby's energized fiddling, and the trademark Palermo humor comes through in "Song of the Viking." But there are two primary languages being spoken here—jazz that rocks (as opposed to fusion) and big band swing with all the idiosyncrasies of the leader. More than anything else, The Adventures of Zodd Zundgren is big, irresistible fun.