Advertise
2
Catching Up With 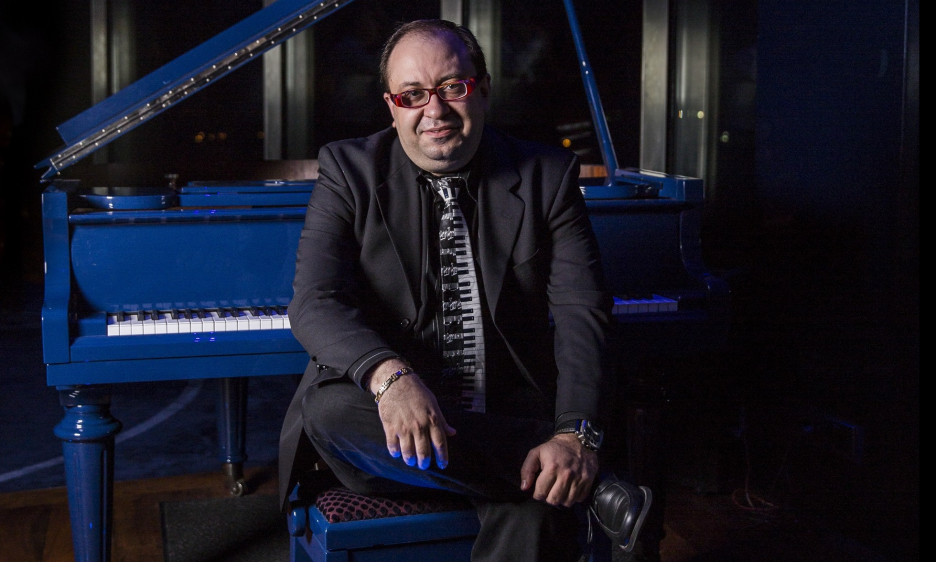 By Hrayr Attarian
March 11, 2019
Sign in to view read count
Pianist, composer and educator Arthur Satyan came to Lebanon from his native Armenia in 1996 with a 3-month contract for the reopening of the area's premier performance space Casino Du Liban. Accompanying Satyan were American musicians drummer Steve Phillips, bassist Jackie Greggs and guitarist Eric Schultz. Satyan ended up accepting a position at the Lebanese National Conservatory of Music as a professor of classical piano and, in 2005 founded the school's jazz department which he still heads. Throughout the past 23 years he has performed all over the Middle East and Europe with renowned local and international musicians, has released two albums as a leader and appeared on over a dozen more as a sideman. Satyan has, in addition to a busy professional life, received several accolades and awards. For instance, in 2018, two of his submissions were chosen as finalists in the third edition of 7 Virtual Jazz Club contest. Both pieces are his original compositions and he performs them with his Armenian trio.

All About Jazz: How did you get into music?

Arthur Satyan: It started back in Soviet Armenia where I was in a family of leading composers. My grandparents, my uncles were/are famous composers (Ashot Satyan, Aram Satounts-Satyan, Aram Satyan) in the western classical idiom. My parents were musicians as well, therefore, my professional fate as a musician was sealed. My brother and my dad were also into jazz and because of their love of the genre I was immersed in jazz from the day I was born. It was the first musical genre I heard at home.

AAJ: How old were you when you started? Did you start with the piano or did you try other instruments first?

AS: My dad started teaching me piano since I was three years old. I would play "Blue Moon" with my tiny hands and improvise a bit with the blues scale accompanied by my dad. I remember he played beautiful chords. At age six I joined an official Music School and started studying classical piano, composition and theory and continued these studies a total of 17 years at the culmination of which I received a Master Degree in Composition and Piano. As an adult I've tried learning to play other musical instruments. When I was a Music Director at Yerevan State Chamber Theater. They had saxophones, trumpets, drums, and bass. So, I dabbled in all these instruments for 5 years. I still play some bass and drums. Besides that, when you study at a dedicated music university (by the way Armenian Conservatory was one of the best in USSR), there were orchestration courses where you had to know about all of the orchestra instruments, some of them you had to even know how to play.

AAJ: You also play organ do you feel that your extensive classical background in piano affects your approach to the organ? If yes how?

AS: Organ playing has nothing to do with the piano. I mean the keyboard is the same, theory of music is the same, but other things are completely different. You cannot play an organ with a mentality of a pianist. Everything changes: technique, phrasing, soloing approach, comping approach, etc...

AS: As I've mentioned above, I have been immersed in jazz since the day I was born, but professionally I started my first jazz quartet when I was in Music College, while simultaneously working at Yerevan State Theater. This was in 1988. Few years later, we opened a Jazz Café at the Theater. This gave us the great opportunity to play almost every day.

AAJ: When and where was your first jazz performance?

AS: Our first big performance/concert as a band leader was at the 'Jazz Days in Armenia' Festival. I was 17 back then. My group performed in the category of "Young and Promising Talents."

AAJ: Who are your influences?

AS: Oh, there are so many. When I was a child I was into Oscar Peterson, Art Tatum, Erroll Garner, Duke Ellington, Ella Fitzgerald, Louis Armstrong, etc... Later on, I discovered Charlie Parker, Bud Powell, Barry Harris, Thelonious Monk, Miles Davis, John Coltrane, etc... And in time I got into Wayne Shorter, Ahmad Jamal, Herbie Hancock, Keith Jarrett, Chick Corea, McCoy Tyner, etc... Just like any jazz musician, I can't just name one or two persons. All of them bowled me over at different points in my life.

AAJ: What are your favorite albums?

AAJ: Can you tell us about your two recordings?

AS: The first one I recorded was in 1998. It's called ART for ART's Sake (Self Produced, 2003) and it's a trio album: piano, bass and percussion. I released it in 2003. Now they have it on iTunes with some bonus tracks, which were not on the original album. My second is Jazz-Fusion album called ARTology (Self Produced, 2013). All the tunes are my own originals and the musicians on it hail from three countries: Armenia, Lebanon and Syria. I started recording it in 2008 and released it in 2013. I also have a 3rd album ready. It is a jazz trio album with the same musicians (bassist Khatchatur Savzyan and drummer Paolo Orlandi) who play with me on those 7 Virtual Jazz Club competition videos. Great band, we play my own compositions. Recorded it in 2017 and hopefully I will release it in 2019.

AAJ: You are also the dean of the jazz school at Lebanese National Conservatory of Music and professor of piano since 1998. Have you seen an increase in interest in jazz among the youth in Lebanon, the post-war generation during your tenure?

AS: Well I came to Lebanon in 1996, there was no traditional jazz band. Mostly everyone was into fusion, Arabic fusion with some jazz elements. Some cats were trying to play acoustic sounding jazz, but they didn't know what they were talking about. I started giving private lessons until I joined National Conservatory in 1998 as a classical piano teacher. Few years later I was able to convince the director, the late Dr. Walid Gholmieh to start a jazz program. He told me sarcastically "Try it if you want, but I don't think in Lebanon it'll work. Many people tried it before you." I knew who tried and I told him "let me try, I'm not 'many people,' I know how to do it." In a year, we did a student concert and he was shocked with the high quality of the result. Next day he announced the 1st in the Middle East Jazz Department at the Lebanese national Conservatory of Music. This was in 2004.

Since then we had hundreds of students. Almost all young Lebanese musicians who plays jazz in Lebanon or abroad nowadays are coming from this jazz course of mine. So, interest is there, but there should be more inspirational acts for students. Like masterclasses, live concerts and all that. Not so many music groups want to visit Lebanon for political reasons. Unfortunately!

AAJ: Do you feel your educational mission aligns well with your busy and versatile performance schedule?

AS: Yeah, I have no problem with that. I'm am able to balance the two. In the summer I perform more than I teach, because the conservatory is closed during summer vacations. During the school year I do the opposite.

AAJ: What final words do you have for the All About Jazz readership?

AS: Well! Listen to the good music. Check out new artists. If you like my music, check out my website to stay up to date on my upcoming gigs, concerts and CD releases. Thank YOU!