Musicians themselves, Lisik and Allen have somehow left no stone unturned when assembling this incredibly thorough history of an iconic ensemble. 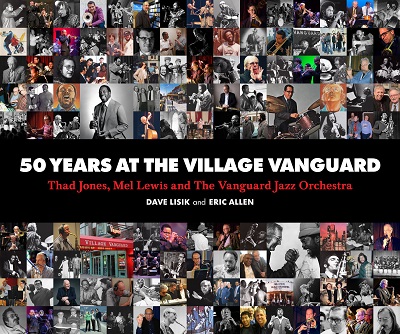 During the heydays of the big bands, people swooned and jitterbugged to the swinging sounds of these large ensembles. Names like Count Basie, Woody Herman, Les Brown, Cab Calloway, Glenn Miller, and Artie Shaw were household names to most folks. Large ballrooms featured the big bands and brought droves of folks eager to dance to their swinging riffs during the '30s and '40s. As the '50s were ushered in, radio and film even gave substantial exposure to these popular bands. But by the '60s, the times had changed and both current tastes and economics had dealt serious blows to the sustainability of these large units.

Even with the decrease in viable big bands throughout the '60s, it seems nobody bothered to tell drummer Mel Lewis and trumpeter Thad Jones that leading such an ensemble might not be such a great idea. Add to that the fact that the pair would fill their roster with a who's who of New York's finest musicians and the prospects for any such endeavor's success seem rather slim. Yet, none of these matters seemed to concern Thad and Mel when they started rehearsing "The Jazz Band" in November of 1965. As authors Dave Lisik and Eric Allen explain in their superb recounting of the history of the Vanguard Jazz Orchestra, the ensemble would land a Monday night slot at the Village Vanguard thanks to disc jockey Alan Grant. In fact, recently unearthed recordings from February and March 1966 capture the band at their start and can be heard on the Resonance release, All My Yesterdays: The Debut 1966 Recordings at the Village Vanguard.

Now some 50 years later, the Vanguard Jazz Orchestra has played roughly 2609 Monday evenings at their Greenwich Village home, while documenting itself via 33 albums and logging in countless tours covering five continents. Musicians themselves, Lisik and Allen have somehow left no stone unturned when assembling this incredibly thorough history of an iconic ensemble. Covering 316 pages and fourteen chapters, this treasure trove includes a wealth of photos, vintage documents and other memorabilia. It can be easily digested from start to finish or can be taken in small doses as there are specific chapters that exclusively cover the career highlights of Jones and Lewis, along with in depth profiles of the music of Bob Brookmeyer and Jim McNeely, and the Village Vanguard itself.

Far from being merely an academic exercise in history, the text here is illuminated by extensive quotes from those musicians who were there as the band developed its reputation. Eddie Daniels, Jerome Richardson, and Marvin Stamm are just a few of the gentleman who wax eloquently about their experiences. In addition, archived interviews from both Thad and Mel are integrated into the context of the essays to give them further depth. Following Jones' departure from the band in 1979, Lewis found himself at the helm of a unit that seemed to have lost its footing. The authors' due diligence tells both sides of the story while covering this important stage of the band, which saw the debut of pianist Jim McNeely and the return of Bob Brookmeyer.

A particularly colorful chapter entitled Riding the Bus: Life on the Road, provides text and artifacts that paint an accurate picture of the touring life of the band. The Soviet Union, Japan, Egypt, and Germany were just a few of the stops the group has made over the years. Itineraries and posters bring to life a timeline of a musician's day on the road and current band members Scott Wendholt, Terell Stafford and, David Wong speak of the depth of appreciation the Japanese have for the band. As longtime member John Mosca states, "Over there, they treat us like rock stars."

The last third of the book or so focuses more closely on recent history, including profiles of the current band members. Chapter eleven is set aside exclusively for coverage of the ensemble's 50th anniversary, which took place at the Vanguard on February 1, 2016. Pictures from Allen's camera document the event in all its glory and he's recently returned to New York for the 51st anniversary that also coincides with the release of the book at hand.

Wisely, Lisik and Allen have provided a complete album discography, with cover photos and details about tunes, personnel and recording dates. A "By the Numbers" page concludes the set with vital statistics covering the past 50 years. Among those choice nuggets is this interesting fact-trombonist and current director John Mosca has the distinction of serving the longest tenure with the Vanguard Jazz Orchestra, having joined the band in 1975. As he explains, he thought his stay would last merely a few weeks. "I thought then it was the call of a lifetime," says Mosca. "Forty years later, I still do." Such a legacy deserves nothing but the finest documentation and indeed that is exactly what it gets. A must-own item for any fan of this ensemble and its history, the book is available exclusively from SkyDeckMusic.com.