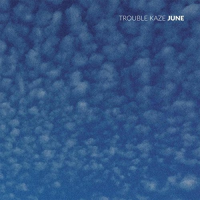 In its original form, the French-Japanese collective Kaze was already a novel proposition, with the double trumpet spearhead of Natsuki Tamura and Christian Pruvost allied to Satoko Fujii's piano and Peter Orins' drums. But on June, the novelty quotient ratchets up a notch further with the doubling of the piano and drum set. That the additional pianist is Sophie Agnel, renowned for her exploration of the piano as a sound generation device, piques the interest yet further. Rather than the usual compositional framework, there's an unbroken fully improvised performance, demarcated into five parts, which reveals another facet of the group's identity.

The freewheeling sextet traces the trajectory of a free jazz presentation, but without recourse to melody, rhythm or conventional timbres, resulting in a particularly atmospheric outing. Agnel draws Fujii deep into her orbit with consequentially more than the usual measure of under the bonnet mayhem. "Part I" with indeterminate tinkles, textures, rattles and squeaky toy sonorities acts as a sort of scene setting. By "Part II," the exchanges becomes gradually denser as a delicate reiterated piano motif vies with fragments of drum tattoos and the first blasts of breathy trumpet. Even though the participants allow each other lots of space, it's still hard to tell who does what.

By "Part III" the trumpets blossom into a duet of exclamations, exhalations and raspberries, latterly accompanied by crashes from the drums and piano interiors. Assembled from components of marimba-like piano preparations, extended drones, and isolated ostinatos, the band builds to fiery trumpet exhortations over churning percussive stew. In fact Fujii only takes the spotlight briefly in "Part IV" for a slow abstract section, which gives only the barest hints of her abilities and indicates that her ego, like that of all the other members, is subsumed entirely to ensemble purpose.

In due course the interaction subsides into a silence broken only by barely audible percussion and other effects which are less riveting on disc than in concert. Such low key events continue with vocalized muted trumpet and a return to the opening gambit, though this time punctuated by sudden whacks and repeated trumpet notes disconcertingly resembling an electronic alarm. As such, June stands alone from the rest of the Kaze discography, as signaled by the modified name, but those looking for a less daunting introduction to the outfit's delights might prefer offerings like Tornado (Circum/Libra, 2013) or Uminari (Circum/Libra, 2015).