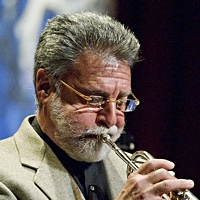 Mr. Stamm is an accomplished performer whose technical skill is used as a means to stimulating original ends.
—Leonard Feather

Throughout his distinguished career, Marvin Stamm has been praised for both the art and the craft of trumpet playing. Leonard Feather stated that Mr. Stamm is an accomplished performer whose technical skill is used as a means to stimulating original ends.

While attending North Texas State University, Mr. Stamm was discovered by Stan Kenton. Upon graduation, he joined Kenton’s orchestra as his jazz trumpet soloist, touring with him in 1961-1962 recording five albums with the orchestra. In 1965-1966, he toured worldwide with Woody Herman.

Settling in New York in late 1966, Marvin Stamm quickly established himself as a busy jazz and studio trumpeter. New York was bustling with jazz activity during that period, and Stamm performed at key venues with many of the significant players in the business. He gained considerable recognition for his playing with the Thad Jones/Mel Lewis Jazz Orchestra (1966- 72) and the Duke Pearson Big Band (1967-70), as well as performing with Frank Sinatra (1973-74) and the Benny Goodman Sextet (1974-75) among others. Stamm was also a recognized first-call studio player (1966-89), recording with Quincy Jones, Oliver Nelson, Duke Pearson, Thad Jones, Wes Montgomery, Freddie Hubbard, Stanley Turrentine, Bill Evans, Patrick Williams, Michel Legrand, Frank Foster, Paul Desmond, George Benson and many more.

Eschewing the lucrative studio scene in the late '80s, Mr. Stamm has focused his attention on his first love, playing jazz. Since that time, he has been a member of John Lewis’ American Jazz Orchestra, the Bob Mintzer Band, the George Gruntz Concert Jazz Band, and Louis Bellson’s big band and quintet. Mr. Stamm’s small group activities have included performing and touring with pianist Bill Mays as a duo and also with the Inventions Trio, which included cellist Alisa Horn. Mr. Mays was also a member of Stamm’s quartet with bassist Rufus Reid and drummer Ed Soph.

Mr. Stamm currently co-leads a quartet with pianist Mike Holober that includes drummer Dennis Mackrel and bassist Mike McGuirk. Holober and Stamm began playing together after meeting through their work with the Westchester Jazz Orchestra. Regular Sunday afternoon duo sessions nurtured a close friendship and a unique musical connection. When joined by bassist Mike McGuirk and drummer Dennis Mackrel, the scope of their intimate conversation expanded, resulting in a deeply satisfying interactive dialogue.

Marvin Stamm’s first solo album, Machinations was released in 1968, composed and arranged by Jazz legend, John Carisi. This was followed in 1982 by Stammpede, which heralded his re- dedication to a solo jazz career.

The Stamm/Soph Project – Live At Birdland, released in 2005, features Mr. Stamm again working with Bill Mays, Rufus Reid, and Ed Soph, with guitarist John Abercrombie guesting on several tracks. Recorded “live” in the club over two evenings, this CD showcases all at their creative best.

Alone Together, a two-disc set, a DVD and CD, was released in October 2007. This live concert was videoed and recorded at Rising Jazz Stars, an intimate concert venue in Beverly Hills, California and again featuring Bill Mays, Rufus Reid, and Ed Soph.

The Marvin Stamm/Mike Holober Quartet with Dennis Mackrel and Mike McGuirk has just released their album, The Marvin Stamm/Mike Holober Quartet Live At Maureen’s Jazz Cellar. Maureen’s is a beautiful, intimate club that provides an excellent environment in which to connect with a “listening” audience. The music was performed and recorded live in one evening, the results as heard by the audience, “in the moment.” This music was a labor of love for the quartet—all of us having deep roots in this music.

Critical response to Stamm’s work over the years has been highly enthusiastic. Downbeat reported that Stamm “has a gorgeous tone on the trumpet and flugelhorn, and he flies through the changes.” JazzTimes said that “the Memphis native has chops and talent in abundance. He can burn on bebop changes, or mellow out on a ballad, all the time maintaining the lucid consistency that enthusiasm and experience engenders.” Jazz Review states, “It is a pleasure listening to the work of Marvin Stamm, anytime! Stamm is a musician’s musician, performing flawlessly on his trumpet and flugelhorn.”

Acknowledging his debt to the influence of former teachers and musicians, Marvin Stamm has spent a good deal of time and energy helping young music students develop their own voices. His involvement in Jazz education has taken him to universities and high schools across the U.S. and abroad as a performer, clinician and mentor, perpetuating the traditions that Jazz represents. Show less

Marvin Stamm and the Russians

From: Hiding Out
By Marvin Stamm

When There Were Trains

From: Balancing Act
By Marvin Stamm

All About Jazz musician pages are maintained by musicians, publicists and trusted members like you. Interested? Tell us why you would like to improve the Marvin Stamm musician page.