Life's A Movie - The Inventions Trio 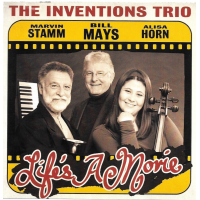 Life’s A Movie - Commissioned by Howard Horn and Frank Osborne for The Inventions Trio Composed and arranged by Bill Mays Life’s a Movie is the third CD by the Inventions Trio and once again exhibits Bill Mays’ marvelous writing skills. Bill has composed another extended work along with arrangements of standard fare, both jazz and classical. The new extended suite is titled Life’s a Movie, but is subtitled Four Themes In Search Of A Movie. The other pieces include combining the Concierto de Aranjuez with Chick Corea’s Spain, Homage To Bill Evans, which includes four of his classics, and Monk Tribute, comprising three of his compositions. As Doug Ramsey states in his notes, “Nearly a decade into their musical life together, Bill Mays, Marvin Stamm, and Alisa Horn are having more fun than ever.” That about says it all!

Help improve the Life's A Movie - The Inventions Trio page

All About Jazz musician pages are maintained by musicians, publicists and trusted members like you. Interested? Tell us why you would like to improve the Life's A Movie - The Inventions Trio musician page.