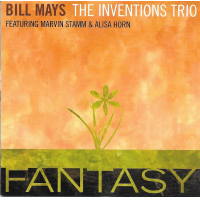 The Inventions Trio is a group comprised of an unusual instrumentation – trumpet (and flugel), piano, and cello. Bill Mays and I are joined by the talented cellist, Alisa Horn. I have known Alisa since she was a young child, and it was exciting for me to introduce Alisa to Bill, to encourage their musical relationship, and then observe her joining us as a performing and touring ensemble. The music Bill has written and arranged for this CD, "Fantasy," is built upon lovely classical melodies that provide beautiful thematic material for the ensemble and wonderful settings for our improvisations. Bill’s original composition, "Fantasy for Piano, Trumpet, and Cello" is a great example of modern writing, combining classical composition and jazz exploration. The Inventions Trio truly embodies the melding of these two genrés. We are very excited about this, our first CD, and the touring that will follow. I hope you will join us on our journey.

All About Jazz musician pages are maintained by musicians, publicists and trusted members like you. Interested? Tell us why you would like to improve the Fantasy - The Inventions Trio musician page.