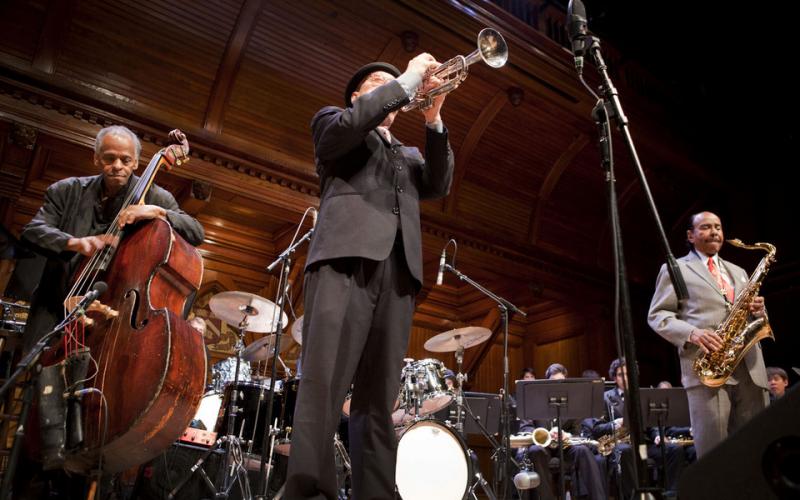 By Andrew J. Sammut
April 20, 2011
Sign in to view read count
Harvard All-Stars and the Harvard University Sunday and Monday Jazz Bands
Harvard Sanders Theatre
Cambridge, MA
April 9, 2011
Ivy League universities are known for bringing together extraordinary individuals to do extraordinary things. Yet Saturday, April 9 was an even more extraordinary night at school for Harvard students, when an honor roll of jazz talent joined them to celebrate "40 Years of Jazz at Harvard." The concert capped off a weekend of events, including the opening of an exhibition of original manuscripts and memorabilia, and a discussion about the history of jazz at Harvard with Quincy Jones Professor of African American Music Ingrid Monson and Tom Everett, the driving force behind Harvard's jazz programs.
After being hired as Director of Bands in 1971, Everett created Harvard's first student jazz band and a year later taught the first jazz history course at the nation's oldest institution of higher education. He continues to lead Harvard's now two (!) student jazz bands and teach jazz history to further generations of students. In 1974, Everett invited trombonists Carl Fontana and Phil Wilson as visiting artists to Harvard. Since then the university has hosted a different visiting jazz artist each year and commissioned dozens of original works from a list that includes Anthony Braxton, Dave Brubeck, Dizzy Gillespie, Quincy Jones, J.J. Johnson, Steve Lacy and dozens of others. Forty years ago Professor Everett probably didn't imagine the lavish celebration onstage at Harvard's Sanders Theatre, but his hard work and passion were brought to living, swinging reality Saturday night.
The students of Harvard's "Sunday" and "Monday" Jazz Bands dug into charts by Count Basie, Duke Ellington and Charles Mingus with a joyful energy that was palpable to eyes and ears. "Myra," a 2001 commission from Benny Carter, honored a former Director for the Office of the Arts and featured heartwarming interplay between vocalist and band across a variety of tempos. The Harvard connections kept coming when saxophonist and former Harvard student Don Braden joined the Monday band to conduct his composition "Landing Zone." This was Braden's first big band arrangement, commissioned by Harvard for their jazz bands' 25th anniversary. Braden's gliding depiction of "the touring life of a musician and the ups and downs of flight" offered ample room for his uncluttered, driving tenor and ebullient stage presence while conducting the noticeably appreciative students. On "Flying Home," Braden took on the solo mantle of Texas tenor (and Harvard's most frequent visiting artist) Illinois Jacquet. Starting out with a reverently paced reading of Jacquet's famous solo, Braden peeled off chorus after chorus of technically adroit yet viscerally gripping lines.

After the intermission and a touching montage of footage featuring past visiting artists, the Monday Jazz Band returned to the stage with pianist and bandleader Eddie Palmieri sitting in at the keys. Trumpeter Brian Lynch led the band through his own deliciously down and dirty arrangement of Palmieri's "Elena, Elena." Palmieri rolled bluesy block chords over coiling grooves, and Lynch sculpted fiery ascents into the stratospheric reaches of his horn. After the applause, the students on stage eased back into the best seats in the house for tenor saxophonist Benny Golson, bassist Cecil McBee and drummer Roy Haynes to join Palmieri and Lynch onstage.

The evening closed with a stomping but bittersweet "E.P. Blues for Moody," a tribute to saxophonist, flutist and vocalist James Moody, whose untimely death in December prevented him from joining his musical colleagues at Harvard. Don Braden joined in on flute for this chattering blues jam, with coy flutter tonguing and intricately piping phrases. Lynch's rapid-fire exclamations maintained a clear narrative, while Palmieri's thundering pedal points filled the hall with dancing drama. Cecil McBee, whose playing and compositions often lean towards the limits of post-bop, slapped and shouted through his bass, recalling both Milt Hinton and the gospel circuit.

The audience's tapping feet and standing ovation spoke to the power of this music, but not nearly as well as the beaming faces of the students and their professional mentors on stage. This was an education about jazz for all involved.