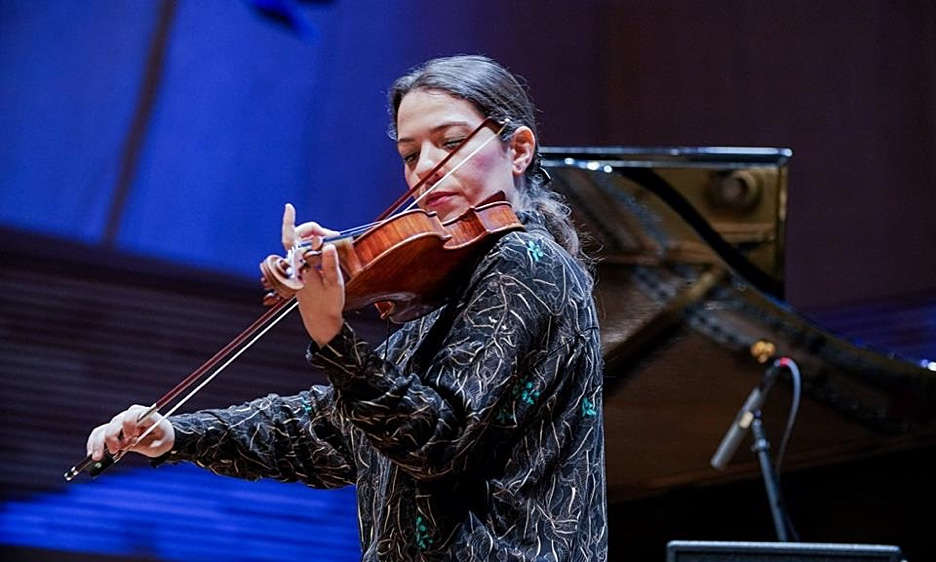 By IAN PATTERSON
August 9, 2018
Sign in to view read count

I think that the violin is actually the jazz instrument of the future, because it’s maybe the most beautiful instrument. We need more jazz violinists. —John Scofield, Guitarist/Composer

"An international jazz violin competition? Really?" That is usually came as a surprise to the applicants, and eventual participants themselves, that an international jazz violin competition should exist says a lot about the rarity of such an event. Yet as the bi-annual Zbigniew Seifert International Jazz Violin Competition has demonstrated, there is certainly no shortage of truly outstanding jazz violinists in the world. The first two editions of the competition—which debuted in 2014—surprised even the judges, so impressed were they with the level of talent on show. The third edition, held as before in the Krzysztof Penderecki European Centre for Music in Luslawice, was no exception.

With uniformly excellent performances, the twelve finalists, hailing from North America, Europe and the Middle East, provided good-sized headaches for the esteemed panel of judges, Mark Feldman, Michal Urbaniak, Erik Friedlander and Dominique Pifarély, as well as uplifting and inspiring entertainment for the audience in the formal concert hall.

Entertainment? From its earliest days jazz was a music of entertainment, a mantle it hasn't quite shrugged off. Over the decades jazz has also assumed an altogether more artsy, high-brow image, and the music presented by twelve world-class violinists during the three days of competition was much more than just an agreeable diversion. For the competition finalists, professional musicians all, it represents not only a way of life, but a livelihood. For the winner, 10,000 Euros and the chance to record a CD was motivation enough to do something fairly unnatural for the majority of musicians—that's to say, compete.

Then there is the prestige that comes with winning such an event. The Zbigniew Seifert International Jazz Violin Competition may be the only one of its kind, but already, in just three editions, it has gained an international reputation. Most of this year's finalists had heard of the competition through word of mouth. Whilst competition is anathema to most musicians, a first prize in the bag from a prestigious competition is often the first item on their bios. So, there was a lot at stake during four days of intensive practise and performance.

The dual aims of the competition, founded by the Zbigniew Seifert Foundation, are to promote outstanding young musicians (violinists, cellists and violists) and to promote the legacy of Zbigniew Seifert, the virtuoso Polish violinist who died aged 32, in 1979. Like nearly all this year's competition participants, Seifert was classically trained before switching to jazz. A key member of Tomasz Stanko's first great quintet from 1968 to 1973, Seifert's tragically short solo career, nevertheless produced some incredible music, of which Man Of the Light (MPS, 1976) and Solo Violin (EMI, 1976) are two highly recommended entry points for anyone unfamiliar with the violinist's talent.

The recent, exciting discovery of a long-lost recording of Seifert's short-lived, jazz-fusion band Variospheres, resulted in the release Variospheres: Live in Solothurn (Zbigniew Seifert Foundation, 2017). These CD releases and reissues, together with the English translation of Aneta Norek-Skrycka's Seifert biography, Man of the Light: The Life and Work of Zbigniew Seifert (Zbigniew Seifert Foundation, 2016), are playing a significant role in promoting Seifert's legacy -not only to an international audience, but within his native Poland as well.

To an older jazz generation, in the pre-CD era, Seifert was well respected by his peers on both sides of the Atlantic. Those his time was short, Seifert recorded with the likes of Eberhard Weber, Philip Catherine, Joachim Kuhn, Cecil McBee, Billy Hart, Charlie Mariano, Jack DeJohnette, the band Oregon, and John Scofield, amongst others.

In a nice piece of symmetry, Scofield, along with John Medeski and the 19-piece Konglomerat Big Band, paid homage to Seifert and his music with a gala concert in Kraków that concluded the 3rd Zbigniew Seifert International Jazz Violin Competition in style.

Master of ceremonies Janusz Jablonski of Polish National Radio introduced the backing trio for the competition. Pianist Dominik Wania, bassist Max Mucha and drummer Dawid Fortuna are three of the most respected jazz musicians in Poland. Collectively, they have worked with Tomasz Stańko, Zbigniew Namyslowski, Janusz Muniak, Maciej Obara, Piotr Damasiewicz, Anna Maria Jopek, Ledsek Modzser, Aga Zaryan and Pawel Kaczmarczyk, to name but a handful—in short, a who's who of Polish jazz spanning over fifty years of history. Suffice it to say, the twelve finalists were in excellent hands. On day one, six musicians presented three pieces each, one of which had to be a composition by Zbigniew Seifert.

Lithuanian violinist Tadas Dešukas' background in jazz, rock, electronic, contemporary folk and classical came through in a fine performance on electric violin of very contemporary hue. Dešukas stamped his personal mark on Seifert's "Turbulent Plover" with a solo spare in notes but big on atmosphere, his long, woozy notes delivered with painterly gravitas. Without pause, Dešukas embarked on an unaccompanied exploration, where looped drone formed the backdrop to a solo of dark lyricism. Silencing the drone, Dešukas played a lulling pizzicato melody with deft touch. This arresting pizzicato bled into "Sprout," the rhythm section's infectious, slow-funk groove providing the canvas for Dešukas seductively measured solo. Wania followed suit, upping the energy levels, before handing back to Dešukas, who's snaking, bluesy improvisation once again eschewed show-stopping fireworks in favor of raw, from-the-gut emotion.

Italy-based French violinist Cécile Delzant studied at both the Royal College of Music of London and the Conservatory Giuseppe Verdi of Turin, yet despite years dedicated to studying classical violin, Delzant abandoned those studies to throw herself into jazz and improvised music, though folk music has also long been a passion. Opening with Seifert's fiery "Passion," Delzant gave a brief but articulate solo before handing the reins to Wania. The two traded back and forth, but it was really on the next two compositions that Delzant's musicality best shone through. On Billy Strayhorn's "Lush Life" Delzant's unaccompanied intro grabbed the attention, her harmonically rich lines paving the way for a sumptuously lyrical rendition of the famous tune. With the ease of lovers strolling through a park on a summer's day, the trio locked into Delzant's mindset as the violinist tasted every note she played. This was balladry at its most beguiling. For her final piece, Delzant chose "Bluebeard" by renowned Kraków film composer and jazz musician, Andrzej Trzakowski. A generous leader, Delzant carved out soloing space for the trio, though in competition conditions, naturally enough, Delzant showed more of her chops than she had on the first two numbers. At this faster tempo, with the rhythm section really cooking, Delzant cut loose, although there was always the sense of her music breathing, as opposed to being out of breath.

Like Zbigniew Seifert, French violinist Youenn Rohaut found early inspiration in the language of John Coltrane. Michael Brecker's long shadow also fell over Rohaut, as did that of Jean-Luc Ponty, but arguably of equal importance in shaping his musical world has been the rich folkloric tradition of his native Brittany, plus Irish and Turkish maqam traditions. In what was perhaps a bold move, Rohaut chose two Wayne Shorter compositions as frameworks for his musical vision, plus an untitled Seifert composition. A few technical glitches with leads took several minutes to iron out, which can have done little to settle any nerves he might have been feeling, but once he was underway Rohaut played with a confidence that made light of the competitive conditions.

A walking-bass rhythm and pizzicato melody on violin announced "Witch Hunt," sans piano accompaniment. Rohaut wasted little time in employing his pedal board to effect spacious, synth-like strokes, a characteristic soundscape that punctuated his quite lyrical solo. Musically more ambitious was Rohaut's interpretation of "Footprints," which, melodic head apart, bore little relation to the original. Once again, Wania sat out, allowing more space for Rohaut—and Fortuna—to explore, but Wania's acute harmonic sensitivity might have added depth to this essentially uncluttered rendition. The pianist returned for Seifert's tune, his comping alone lending wings to Rohaut, whose impressive solo, devoid of showboating, relied instead on narrative flow to captivate. The final word went to Fortuna, whose bustling, polyrhythmic solo made for a striking finale.

With two albums as leader and as a member of Kaja Draksler's octet, Romanian violaist, violinist and electric guitarist George Dimitriu came into the Seifert competition with a wealth of experience. Add to that his classical training and tours with The National Opera & Ballet Amsterdam and it's fair to say that Dimitriu is a rounded musician. On viola, Dimitriu began with Seifert's "Singing Dunes," an impressionistic number of understated lyricism. Dimitriu showed great control in the sustained higher registers of that number, but it was with his own two numbers that he really came into his own. There was emotional depth in his delivery on "Future Nostalgia," an elegant tune tinged with melancholy. With the trio lending gently bouyant support, Dimitriu embarked on a beautifully judged solo with singable melody at its core. There were straight-ahead elements to "Manipulation," with bass ostinato, close-knit ensemble play and vamps throughout, with Dimitriu saving his most expansive and fluid solo—articulate, elegant and above all emotive—to the last. Surprisingly perhaps, given the circumstances, the composition finished with a drum feature over a joint viola and piano vamp.

A graduate of the Faculty of Jazz and Popular Music in Katowice, Marcin Halat was a member of the renowned Atom String Quartet from 2013- 2015 and was making his second appearance at the competition, following his participation in 2016. He released his debut, On the Way (Sluchaj Foundation) in 2017, an album which provided two original tunes for this first semi-final. A sunny, folksy atmosphere colored "The Cheerful Time," an appealing tune that nevertheless had plenty of edge in the tensions between piano and violin. Halat's playing, bright, precise and flowing, brought a suitably uplifting response from Wania, although the most fertile—and exciting—ground lay in their contemporaneous dialogue. Halat went up a gear on Seifert's "Coral," his bold attack maintaining a balance between tension and release. Once more, Wania, Mucha and Fortuna provided intuitive support, empowering Halat with their solid foundations and passionate interplay. With a fine sense of stagecraft Halat saved the best to last, the dramatic intro to "Invitation," a foretaste of the storm to come. Flirting between lyricism and abstraction, Halat then opened the floodgates to a tumultuous quartet passage, his searing violin at the heart of an energetic collective performance. The ending of this relatively short composition was sudden and more dramatic than the composition's opening, leaving the lingering impression that Halat had still much more to relate.